A Fake Lili Reinhart Gave An Interview To Seventeen

Yesterday seventeen published an interview with Riverdale's Lili Reinhart where she talked about the show and what is in store for Betty and Archie in the new episodes (at least i think so, they scrubbed it from everywhere fast)

The Riverdale shippers are accusing each other of doing it, but mostly everyone is just confused

the real Lili was also confused

Someone has been impersonating Riverdale’s Lili Reinhart in interviews following the show’s season 5 premiere. The same person is also pretending to be her publicist. pic.twitter.com/56QZxGQ7RQ

Unfortunately I am tweeting at 3am in the UK (overnight reporter), and the story can't be pulled until we go through the correct legal procedure. I can assure you I will do my best to ensure the matter is resolved as soon as possible, though.

if you wonder HOW??, a fan contacted to Express writer to warn him, and he said the interview happened over email

the journalist from the uk article got back to me saying that the interview was done over email so i was correct and it was indeed someone impersonating lili’s pr. he will be taking this very seriously to ensure they are more careful in the future. Since it is 3am in the UK right 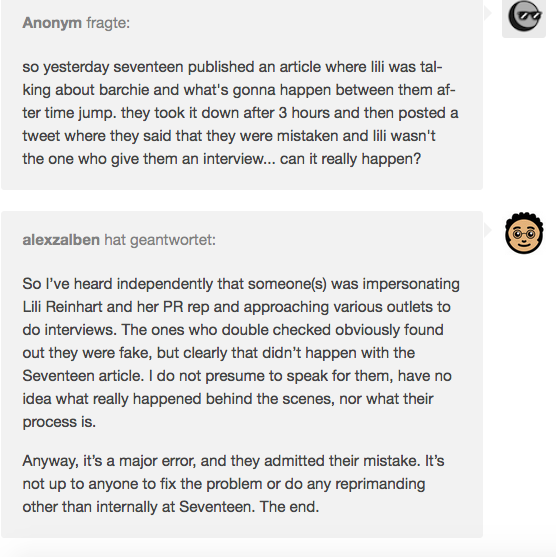