Liam Neeson's Honest Thief took the top spot this weekend with $3.7 million, a slight $80k improvement on last weekend's War with Grandpa top-spot opening. That film fell to 2nd with $2.5 million. Tenet took in $1.6 million. Disney re-released The Nightmare Before Christmas to $1.3 million.

Enemy of Cinema, NY Governor Andrew Cuomo, is allowing theaters in the state outside of the city to open this Friday to 25% capacity, but counties must have under a 2% positive infection rate for 14 days before reopening is allowed. But with infections skyrocketing to the highest levels in 3 months, it might not matter much as other locations across the country may be forced to close shop again if they havent already.

Next week sees horror film The Empty Man debut in theaters while streaming services debut On the Rocks, Rebecca, The Witches, the Borat sequel, and Bad Hair. 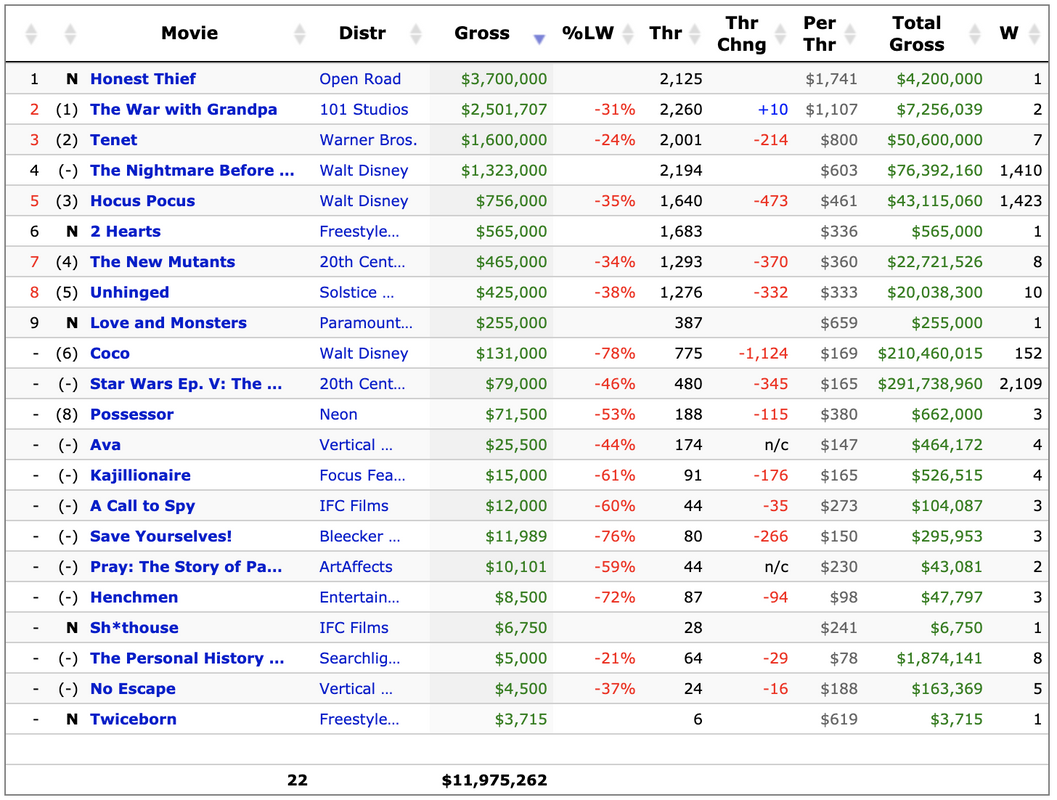 ahkna
October 18th, 2020, 05:10 pm
My wife's friend in Scotland who is otherwise super careful got Covid from going to the cinema last week.

So that's that on that for me for the next year and a half.

mangomuch
October 18th, 2020, 05:46 pm
Awful. Do you know how big the theatre was, how many people were affected altogether?

It's a shame Rebecca looks dull but I think the posts regarding it will be crack.

avada_kedavra
October 18th, 2020, 05:17 pm
wish there was more out that i’d be interested in enough to make the drive to the drive-in for. but the less impetus people have to go the theatre the better. they really should not be open at all (except for drive-ins which seem safe enough)

trendsnational
October 18th, 2020, 05:18 pm
Are theaters opened in the US? I live near a drive in and they're just showing old film's.

deansgirl4eva
October 19th, 2020, 08:05 am
I live in Southern California/Los Angeles adjecent and while some are open, studios are very reluctant to release movies to the big screens so they're either holding them for next year or sending them straight to Video on Demonad (VOD/basically pay-extra on certain streaming sites). No big movies are being released in movie theaters in the US. That makes Drive-in theaters difficult cuz basically they're playing old movies but still charging new movie prices.

batsyx
October 18th, 2020, 05:22 pm
I attended a free screening on Tuesday (at a drive-in) but the screen cut out like an hour in and they were not able to get it back up. And then yesterday I had tickets to see another movie at another drive-in (different from the one I went to on Tuesday) and they ended up canceling it cuz their generator went out. ☹️☹️☹️

They are showing the new Borat movie at the drive-in so I’m considering buying tickets but I would hate to run into technical issues yet AGAIN.

squirrels_oh_no
October 18th, 2020, 05:34 pm
Add some late 90s to your list and you can get all those other juicy teen horror classics - The Faculty, Disturbing Behavior, etc.

luvthatdrtywata
October 18th, 2020, 06:44 pm
I watched urban legend final cut a few weeks ago and I genuinely enjoyed it soooo much. A horrible movie but a fun ride.

tanglespiders
October 18th, 2020, 06:49 pm
I'm sad I missed the beginning of Final Destination 2, which I love a lot for something that has scarred me for life

Like, I was driving on windy, what-qualifies-as-mountain-around-here roads, came up on a log truck, thought "Nope!" and sped up to pass it just to get around a curve and see another one 😭

ohmylol
October 18th, 2020, 05:27 pm
I watched Alguien Tiene que Morir on Netflix and it was so bad, I want my 3 hours back, the sad thing is that the show vas potential imo, the older cats was good ,especially Carmen Maura, I haven't seen her before but damn, great actress, but besides that it was just a mess, Manolo Caro is the Latin American Ryan Murphy

rhapsodeeinblue
October 18th, 2020, 05:28 pm
I've been watching The Haunting of Bly Manor. I watched episode 5 ("The Altar of the Dead") last night and 😱😭. Also the acting was amazing.

lollapoe
October 18th, 2020, 05:49 pm
Do you think it’s scarier than the first season? I’ve been trying to see if I would be able to watch it without spoiling myself too much.

rhapsodeeinblue
October 18th, 2020, 05:54 pm
Hmm personally I don't think it's scarier. Also it's like the first season where it's more about family drama and other issues than scares etc.

genbu_no_miko24
October 18th, 2020, 06:22 pm
Bly Manor is more relaxed on the scary compared to Hill House. Whereas with Hill House I had to hold bed sheets to my face for any given moment, Bly Manor isn’t at all like that.

The scary stuff and jump scares are not heavy this time round. Which is why some people were disappointed with the lack of horror. Bly is more gothic atmosphere than straight horror.

okrodrigo
October 18th, 2020, 11:08 pm
i never watch horror stuff, much less unaccompanied, and i watched bly manor mostly on my own. i found it more sad than scary tbh.

pi_lady
October 18th, 2020, 06:08 pm
I'm on episode two now and the kids are creepy and annoying. Also, how many times can they use words like splendid and dreadful? lol
(no subject) -

T’Nia Miller better get some best support praise at the Emmy!

Victoria Pedretti was also really good this season!!
(no subject) -

theoryofwar
October 18th, 2020, 05:31 pm
Finally feeling a bit better after 4 days of hell. It's not COVID related tho, so I won't give anyone the virtual 'rona! Hoping I stay feeling this way tonight since I'm taking a virtual class and have been looking forward to it all week!

I watched An American Werewolf in London last night. I said it while watching Stitches and I'll say it again, I fucking love practical effects so much.

doriiansz
October 18th, 2020, 05:33 pm
I admit I used to watch Liam Neeson movies even if they seemed to follow the same formula, but after he came out as white supremacist I can't stomach his appearances in movies. [Spoiler (click to open)]I was so glad when Viola Davis shot his ass in Widows.

sashwizzled
October 18th, 2020, 07:17 pm
Honestly like, I'm not shocked that this old white dude is a racist who thinks that one black man's horrific deed means all black men would do the same.

pi_lady
October 18th, 2020, 05:41 pm
Watched Valentina, a Brazilian movie about a trans teenage girl who moves to a new town with her mom. Definitely worth recommending.

Also watched Unsound, an Australian LGBT movie but I found it mediocre.

weighty_ghost
October 18th, 2020, 05:46 pm
Well fuck AMC for ruining my Final Destination marathon for playing Halloween when they SAID IT WOULD BE FINAL DESTINATION 2

lollapoe
October 18th, 2020, 05:47 pm
I can’t believe Tenet only made 50 mil domestic. I mean, to me, that’s proof that most people in the US, even the ones who barely acknowledge that there’s a pandemic going on, weren’t really that interested in going back to the movies.

Why do you guys think that is? People were tired of being cooped up through spring/summer and just weren’t that eager to go to an indoor activity where you have to keep your mask on? I can see that as a reason for why bars/restaurants are full again but movie theaters suffered (and I acknowledge that apart from Tenet there weren’t many attractive options for the public, but I still think its BO would’ve been higher if there were a true demand for the service right now).

ritaamber
October 18th, 2020, 05:56 pm
I saw it twice at the drive in and it was packed because people were excited to see something new and not available on Disney+. But our sit in theater has had it 3 weeks and they turn their lights out and lock up 30 min after start time because no one comes. The world called Nolans legendary filmmaker bluff.

crispy1088
October 18th, 2020, 05:59 pm
Indoor activity with masks is definitely a factor during summer but heading into the fall that might not be the case anymore. We just have to wait and see.

asnindie
October 18th, 2020, 06:12 pm
It was the restrictions and since watching films is not a social experience. Noone wanted to sit with a mask indoors. People would rather sit and socialise with friends.

devopet
October 18th, 2020, 06:26 pm
Movies also need word of mouth I think - hypes people up and they then will make it an outing. Tenet had none of that.

bananasnrum
October 18th, 2020, 07:34 pm
I think the reality is that most people know a friend or a family member had it. That’s enough to affect behaviors to the degree that the theaters are on the verge of closing for good.

aaronnyc89
October 18th, 2020, 09:09 pm
I'm unsure but I think movie theatres are concentrated in dense urban areas that might still be under some kind of lockdown. They also charge way more for tickets. I kinda think major US cities are where the money is made.
Plus everyone is trapped inside watching movies and TV I don't think the cinema is worth the risk of changing where you do that.

trumpydoesmagic
October 18th, 2020, 05:50 pm
I watched Vampires vs The Bronx and it was so much fun. I was proud of Mero! He was really good in it.

ritaamber
October 18th, 2020, 05:54 pm
The thing i didn't think about at the start of this is that if no movies are hitting theaters, no movies are hitting redbox a few months later. I go stand at redbix every Friday like normal and try to pick out of a list of abomination films the studios were too embarrassed to release a year ago. I miss getting a sonic drink and renting a movie and having my $3 Friday night.
←
→