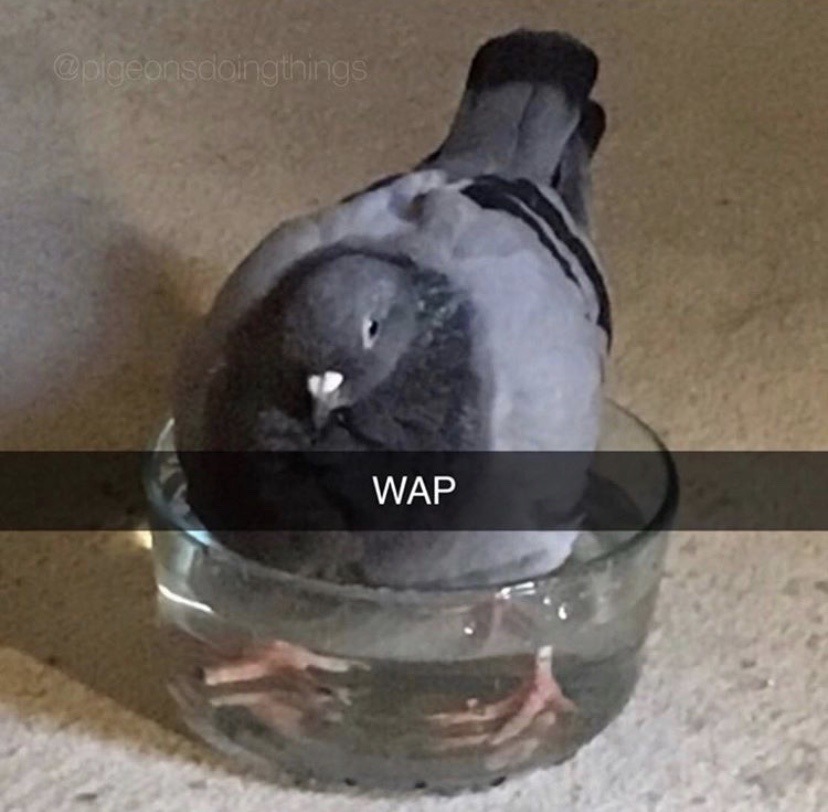 syphilisdiller
September 24th, 2020, 05:12 pm
i was walking back after a march last night i went by a police station that had 50+ still standing outside (doing nothing, REALLY earning that paycheck). as i went past, one of them said "they don't seem to have anything to say now *chuchle chuckle*"

i was by myself and i have never felt more unsafe

howthedaysounds
September 24th, 2020, 05:12 pm
Woke up late so decided to wfh because I didn't feel like rushing to get ready to go into the office today. Laying in my blankets with my PJs on because it's that kind of day. Yesterday was insane at work and I'm trying to take it a bit easier today because I am mentally exhausted.

analievelyn
September 24th, 2020, 05:12 pm
sending llove to Black women. Thankful for those of you that sent me cash yesterday so I could cancel my shift tonight.

It means a lot.

When Tr/mp has made even sea animals raging with anger

missjersey
September 24th, 2020, 05:17 pm
The orchestrated part shouldn't be surprising, they hunt in packs and the matriarchs teach everyone else how to hunt. But it is weird if they're attacking ships.

dreamformula
September 24th, 2020, 07:19 pm
Pollution/global warming/overfishing is probably cutting into their natural food sources so they're desperate. It's sad tbh.
(no subject) -

They have had enough of humans. lol

xellabelle
September 24th, 2020, 05:12 pm
Has anyone order glasses online? Like distance glasses, not reading glasses. I know my prescription but I'm a bit nervous about going to the opticians right now.

sandstorm
September 24th, 2020, 05:14 pm
I've ordered frames from Zenni and took my prescription to an optometrist with them and they put them in.

cheeseasauras
September 24th, 2020, 05:14 pm
I have! You just need to get your optician’s office to give you your prescription info and your pupillary distance measurement.

I usually use Firmoo. They usually have a coupon or a BOGO going at all times and I love the frames I’ve gotten from them.

scriptedending
September 24th, 2020, 05:20 pm
I have ordered from Zenni and Warby Parker in the past. I will say, I think I've overall been more satisfied with the glasses from my eye doctor. But I have pretty bad eyes (-6) so maybe that's a factor. They were definitely still usable, though!

elderpricely
September 24th, 2020, 06:14 pm
just note that they won't be putting the center of the lens where your eyes are, they'll just be centered (vertically) compared to the frame. because my eyes sit near the top of the lens, mine were totally off. if the glasses style you pick has your eyes more in the vertical center, it won't be as much of a problem.

cheeseasauras
September 24th, 2020, 05:12 pm
Today is my five year anniversary with my bf. I talked about this in a food post but we’re going to get some sushi and some sake and get dressed up and go have a picnic somewhere pretty. I’m so excited and I’ve been upbeat and productive at work today.

flyfingers7
September 24th, 2020, 05:15 pm
congrats! when the pandemic blows over you guys should take some nice professional photos at a studio! and bring a pet! that's always fun! these days we don't really have "nice" photos since we do everything on our phones and never print or hang any up!

cheeseasauras
September 24th, 2020, 05:21 pm
Yeah that’s a really nice idea! Thank you.
We’ve talked about doing something like that ourselves because we actually were doing event and portrait photography as a side hustle before the pandemic but this comment was the kick in the butt I needed to get our basement studio set up and take some pics. 💕

sandstorm
September 24th, 2020, 05:13 pm
Having to explain to multiple people that AC is not a framework or a website.

That just means we name frameworks a lot of stupid shit.

mandramoddle
September 24th, 2020, 05:13 pm
I had back pain I tried to ignore, and then started with an uncomfortable feeling "down there". I put 2 and 2 together, and peed on a UTI testing strip and it came back positive. -____- So now I have to take an antibiotic for a week, ugh.

Hate how frequent I get these stupid UTI's. Ever since I was a kid! :( My Kindergartner on a 40 minute video call is a total mood. pic.twitter.com/WE2RHoFZhM

— Kara McDowell pre-order ONE WAY OR ANOTHER (@karajmcdowell) August 7, 2020

sandstorm
September 24th, 2020, 05:17 pm
Why do we have kindergartners sitting in 40m meetings. I can understand 20 minutes but that seems really long for kids.

can’t get over how good these emotional literacy cards are pic.twitter.com/shifo8tnbY

__onthebound
September 24th, 2020, 05:15 pm
i'm making spag bol and i'm famished. also i paid for a stupid driver update program because my touchpad works if i uninstall the i2c driver bc it has the error message and won't start, so i then restart my computer with BIOS and turn off the touchpad entirely, restart w/it off, reinstall the drivers, restart in BIOS (turning the touchpad back on) and turn it back on and sometimes my touchpad comes back. but it comes back for 2min or 4hr. i'm so frustrated. it's a driver issue so idk how to really fix it outside what i'm already doing

weasleyswit
September 24th, 2020, 05:15 pm
I need to get through the next two weeks then I'm driving down to see a friend of mine (who was a previous roommate) and to see my dog Yoda who has been staying with him since February. He was going to watch Yoda for me when I was going to Italy but then COVID hit and Yoda just stayed with him. I'm going for the 3 days weekend and then possibly staying there the week since we're working from home anyway. I can't wait to snuggle up to my baby boy. I miss him so much.

We both are going to self-quarantine so that we can ensure we keep each other safe. He isn't working nor does he have transportation so he doesn't really go anywhere so it's mainly me since I do go to the store.

kwoneunbi
September 24th, 2020, 05:15 pm
Also! A really good analogy I've thought of to make myself feel better these days is to see life as if it was the ice cream machine at McDonalds: expect nothing or the absolute worst so that when it actually DOES work as its supposed to, you're more pleasantly surprised. It's def helped me relax a bit more thru this year, tbh.

mathkills
September 24th, 2020, 05:16 pm
this was how I saw the charges yesterday - I really expected them not to charge any of the cops with anything, so one charge = pleasantly surprised! I mean the whole thing was a disappointment but I def have that outlook in general.

archersangel
September 25th, 2020, 12:10 am
A really good analogy I've thought of to make myself feel better these days is to see life as if it was the ice cream machine at McDonalds: expect nothing or the absolute worst so that when it actually DOES work as its supposed to, you're more pleasantly surprised.

As a Pessimist, I've been doing that for years.

As the saying goes; The nice part about being a pessimist is that you are constantly being either proven right or pleasantly surprised.
←
→