Box office reports are back!

Russell Crowe's Unhinged -- which played in about 1,823 indoor and drive-in theaters - scored a decent $4 million in its wide release opening. The film opened last week in 299 drive-in locations for $600k opening. It will expand to 2,300 locations next weekend.

Spongbob: Sponge on the Run, came in 2nd, scoring $550k in 326 theaters. The film is currently only playing in Canada.

Next weeks major releases: Bill & Ted Face the Music, The Personal History of David Copperfield, and The New Mutants. 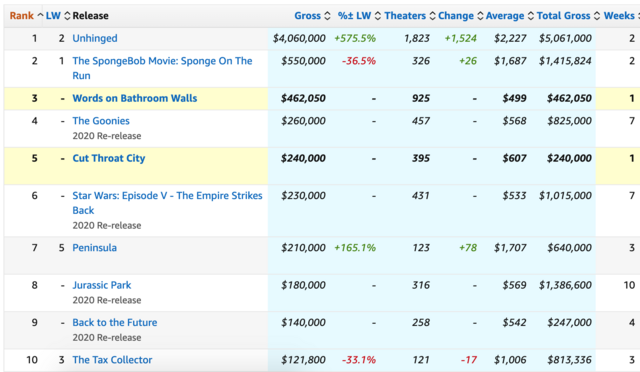 what did you watch this weekend, ontd?? and did any of you actually go to an indoor theater (dont lie!)??
Tags: box office, film
Subscribe