'Coyote Ugly' Was Released 20 Years Ago, Y'all! 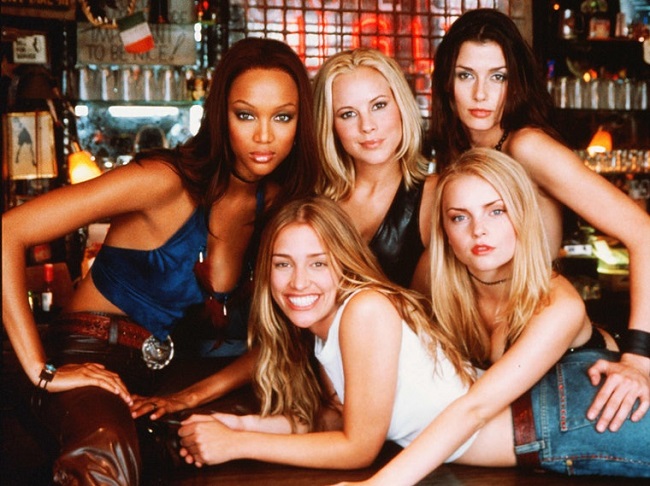 Join us for an oral history of ‘Coyote Ugly’ on the film’s 20th anniversary!@katelloud: https://t.co/0YWYK7JRf0

--The inspiration for the movie came from a 1997 article in GQ written by Eat Pray Love author Elizabeth Gilbert, who worked at the real Coyote Ugly bar. Gilbert was surprised her article was turned into a movie about a bar that didn’t really have anything to do with alcohol and that young girls would watch during sleepovers.

--Liliana Lovell, the real life owner (who the character played by Maria Bello was based on), opened Coyote when she was 25. She graduated from NYU and worked on Wall Street for a year before starting bartending because she wasn’t making any money. She’s only seen the movie once and hates the part where Bello’s character in the movie buys a round for the entire bar because she would never do that herself.

--There were many drafts of the script. The first was written by Gina Wendkos (The Princess Diaries) and was more of a romantic comedy. Other drafts followed, including a “raunchy” version written by Clerks and Chasing Amy writer-director Kevin Smith. Smith says he was paid $100,000 for his work and only one line of his was kept in the movie (Izabella Miko’s character Cammie discussing her bisexuality and saying, “I’ve played in the minors but never went pro”). Carrie Fisher also did a pass on the script, but ultimately it was screenwriter Jeff Nathanson (Catch Me If You Can) who combined elements of all the different drafts and worked with director David McNally to shape together the movie as it is.

--According to casting director Bonnie Timmermann, Christina Aguilera, Jessica Simpson, and Vanessa Carlton all auditioned for roles. Tyra Banks, although a huge supermodel at the time, had to audition for her role as well. Adam Garcia, who Timmermann brought in after seeing him in Saturday Night Fever on London's West End and played the love interest to lead Piper Perabo, recalls that while she had to go through many auditions and call backs, they cast him after she was asked to put up his headshot next to her face to see if they essentially looked good together.

--Miko was a trained ballet dancer on a tourist visa from Poland when she was cast and struggled to get a visa that would allow her to work. During rehearsals and fittings, she passed other girls in the production office reading for her part in case she couldn’t do it. She said she called the ambassador of Poland 17 times in one day and when she finally got through, he helped her secure her visa. Also, she was only 18 during filming, so she had to get a fake ID to visit bars with the rest of the cast and crew to do research.

--The dance scenes on the bar were difficult for the actors and their dance doubles since the area was so small. The crew would douse the bartop with Coca-Cola the night before filming these scenes to make it more sticky and allow the dancers to get a better grip. Owner Lovell decided to add choreographed dances at the real Coyote Ugly after the movie since people expected them now.

--Kaitlin Olson (It’s Always Sunny in Philadelphia) appears in the movie during Garcia’s infamous bachelor auction scene as a bidder. She only had one line in the script but decided to improvise and start yelling things out like, “Come to mama!” which ended up in the final cut.

--The film’s final song, “Can’t Fight the Moonlight,” was added to the movie during reshoots after the powers that be decided that the original finale song, a track called “Fine Now,” didn’t quite work. Legendary songwriter Diane Warren, who composed all the songs in the film, was tasked with writing a new finale song and came up with “Moonlight’ pretty quickly and everyone loved it. She played it for Leann Rimes, who loved it and wanted to crossover from country to pop, and Rimes recorded it and joined the cast for a reshoot of the finale.

--Perabo originally recorded all the soundtrack’s songs herself, but director McNally and producer Jerry Bruckheimer decided that her real voice didn’t fit the character. Rimes was brought in to re-record all the songs in Perabo’s character’s voice. Perabo says she didn’t mind as long as she was still in the movie.

ONTD, were you old enough to see this classic piece of cinema in theatres? Or did you discover it later? And what are your favorite moments from this masterpiece?