ONTD Original: Why You Should Watch 'Avatar: The Last Airbender'🔥💧🌱🌪️ 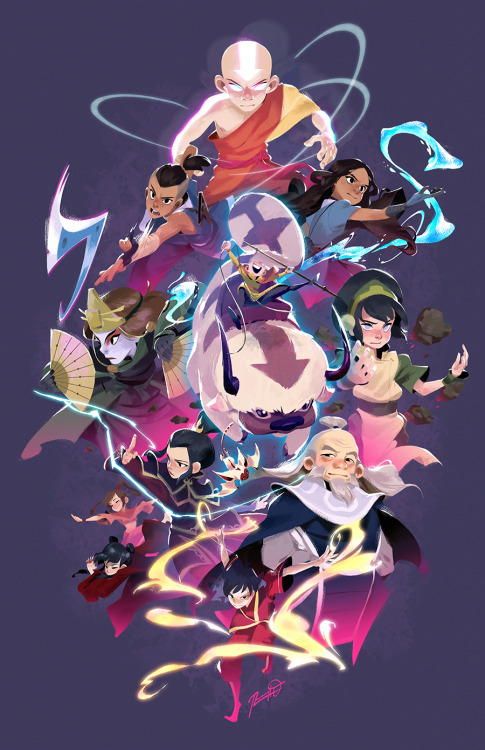 Because we are all living in a pandemic and a lot of us have more free time than usual to spend it on binge watching television shows on Netflix, I thought it would be a fun idea to spend my time creating this post to encourage you (if you haven't already, but was thinkin about it!) to watch one of the greatest shows of all time (imo), 'Avatar: The Last Airbender'. And I also wanted an excuse (and to give other people the excuse) just to talk about the show lol

I will give you five (though there's plenty more) reasons to give this truly amazing show a try:

Now you're probably thinking, "Why would I watch this cartoon kid's show that's fifteen years old?" And you wouldn't be wrong. It is a cartoon. It is fifteen years old. And at the end of the day, it is still a kid's show. BUT - The show is sprinkled with adult themes throughout it that only an adult would understand (and specifically appreciate) how the show tackles these very complex and mature themes, especially for a show that aims at children/younger audiences. In the show there are topics of: genocide, war, murder, mass murder, betrayal, revenge, torture, oppression, sexism (the word "sexist" is actually used in the very first episode), imperialism, totalitarianism and questioning your own morals. Of course it is still a kids show, and the violence is never explicit, but the message behind these violent and complex acts are made clear to us as adults, and we understand the implications and meanings, even if none of these themes are ever explicitly shown on screen. It still surprises me how Nickelodeon allowed the show to depict genocide in the show's third episode. Now you know you'll be in for a ride watching this show if the writers are not scared to teach its young audience some pretty dark lessons of life (and to not "talk down" to their audience). But it's not all doom and gloom, there are tons of very light and comedic moments in the show as well. I still laugh out loud watching this show, even when I'm fifteen years older than I was when I first watched it as a twelve year old.

Probably the best and most compelling reason (imo) to watch Avatar: TLA is for its characters. Each character on the show is so complex and 3-dimensional that you will almost forget that the show was made for kids (I'm not saying that all kid shows don't have compelling and complicated characters, but it's not common, but it's also understandable at the same time). What I think this show does great on is its character development. Each character behaves, and grows, in ways you expect the character to act and evolve. Their actions are believable and understandable. Not only are the male characters well written and well crafted, its the female characters especially that are next level (at least compared to the male characters). What I love about this show the most is how it treats its female characters. Each main female character is so interesting, compelling and complex, and at the same time, it kinda makes me sad that many shows fail to even do the bare minimum when it comes to treating its female characters wtih respect and actually putting in effort to fleshing them out. But I personally don't think Avatar: TLA (and coming from a show that's fifteen years old) not only does the bare minimum, I think the show goes above and beyond to flesh out each of their main female characters (and pretty much all their characters in general), and because of that I think that the show really does deserve the praise its get for its charater development and exploration. The writing in general for this show is pretty good. It's clear from watching the show (in my case, many times) that the creators took time, effort, and especially care, into crafting this world that they created.Yes, it does has its bumps and faults; I don't think any show is 100% perfect, but this show, to me, comes pretty close to it.

What makes Avatar: The Last Airbender so unique in its world building and lore is that it mixes elemental magic (known as "bending") with martial arts. Whenever a character bends an element, they use a specific martial arts style to unleash their element. Each element (air, earth, fire, water) has its own martial arts style that it draws inspiration from. For waterbenders it's Tai Chi Chuan, for Earthbenders it's Hung Ga Kung Fu, for Firebenders it's Northern Shaolin Kung Fu, and for Airbenders it's Baguazhang. Each martial arts style ,for each of its respective element, matches the qualities of that element so perfectly. And there's some pretty badass moments when it comes to the bending on the show that leaves you hyped af.

Like I touched on with how martial arts (of Asian origin) and bending are intertwined, the world of Avatar: TLA draws huge inspiration from different Asian countries (and indiginous cultures for The Water Tribe). Throughout the show, you will see a different variety of Asian influences: to the music, the food, the artstyle, the clothing, the architecture - everything. The Fire Nation takes inspiration from Imperial Japan/Japanese culture, The Earth Kingdom from China/Chinese culture, The Air Nomads from Tibet/Tibetan monks/Indian culture and The Water Tribe from Inuit and Sireniki cultures. Not a lot of shows on television decide to center their show around any Asian country/culture in general, and talking personally, I (being part Asian) really appreciated that this show chose to showcase a lot of different Asian cutlures. And almost every single character is Asian, while all the characters are POC, which I also really appreciated (especailly when I was a kid when this show came out).

The music in this show is simply beautiful, and it fits this world so well. To this day, whenever I hear the Avatar's Theme, it gives me goosebumps  - likely from nostalgia, but the music by itself is still breathtaking and every time a song is played in the show, it perfectly depicts the mood and situation of the scene/s it is used in and it helps immerse the audience, and invites us into its world and in the minds of its characters.

If you have Netflix and haven't seen it, it's worth giving it at least a try, right? I'm 99% sure you won't regret it! Keep in mind that it does start slow and has a slower pace in the first season (and is geared more towards children), but it kicks up real quick by the second half of the first season. And on the plus side, you'll finally find out why everyone on the interwebz says "My cabbages!", and "That's rough, buddy."