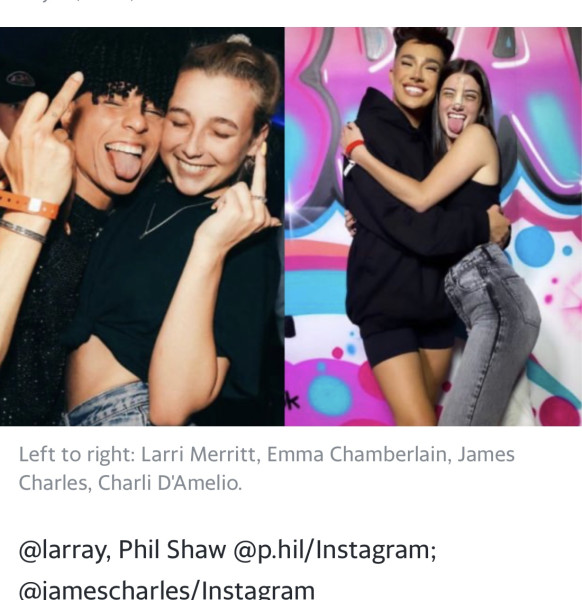 Sooooo... some internet famous white children that are not Joke Paul and his ilk had their own little party. The party was at BOA Steakhouse then went to some club called Hype House in the Hollywood Hills - it featured some internet celebrities all the kids like such as James Charles, Emma Chamberlain, Tana Mongeau (OP said whomst?). The thing is the aforementioned names have not posted any pictures of the event to Instagram or Twitter where they'd have their largest platforms outside of YouTube. So... this whole people don't know, they know, they know.

The D’Amelio sisters were there as well. pic.twitter.com/mRnX2SET0J


i understand 100% where ur coming from & it was a dumb thing to do. I will do better & will actually take this shit seriously. appreciate you tyler much love

They gathered to fight anti-blackness, oh nope, nevermind, they were celebrating some TikTok person named Larri Merritt. This child apparently unleashes foolishness on YouTube and TikTok. The party was criticized by Tyler Oakley (broken clock adage) and Larri acknowledged his wrongdoing, (okay bruh) and said he wanted to do better.

No masks, no distancing, so many vapes, and probably so many Teslas. Somebody come get these little boogers.


ONTD, are you out of touch? No, it is the children who are wrong.