got my best shoes on and i'm ready to go (

If you're an avid or, heck, a casual webcomic reader you have probably hit the 90% chance of falling prey to the Incomplete Page: whether it's the creator completely ghosting everyone, the creator announcing a "temporary hiatus" (but you realize they've posted this announcement 20 years ago and all the comments in the Disqus thread are the sixth letter in the English alphabet), or the creator saying they've quit (usually due to mental health reasons or lack of motivation).

If you're lucky they'll at least post an outline of what was going to happen if they quit! You're usually not lucky though and instead decide to check periodically for ten years in the hopes that they will some day update... /cries in icon

Anyway, to subside the Incomplete Page, here's a list of 5 webcomics that are actually dunzo AND you can still read them online! (Sometimes when they get completed and/or turned into published books, they're taken down from the internet *cough* Nimona *cough*) Whether they're worth the read or not is entirely up to you. 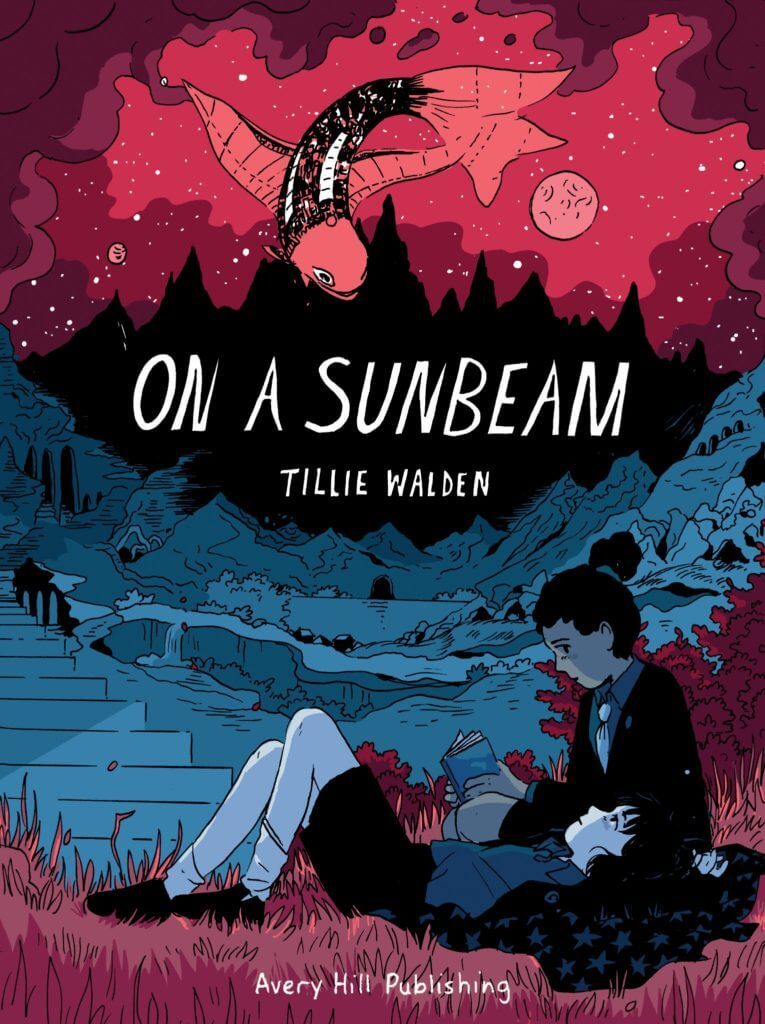 From the creator: "My initial goal with Sunbeam was to create a version of outer space that I would want to live in. So of course that includes tons of queer people, no men (did you notice?), trees, old buildings, and endless constellations."

A ragtag crew travels to the deepest reaches of space, rebuilding beautiful, broken structures to piece the past together.

Two girls meet in boarding school and fall deeply in love―only to learn the pain of loss.

From me:
Tillie Walden is an absolute goddess at drawing and writing pretty comics about girls who like girls. Like, even if you don't care for the story, you know you at least have some amazing art to look at. I might have bought a book just because the cover looked like she drew it. (Spoiler: she didn't, but it was still pretty! and the book was pretty good too tbh.) I LOVE HER and own all her books
The only real problem with her art, imo, is that she tends to draw the same faces. It was a nightmare trying to figure out who was who in her other graphic novel, The End of Summer. I get you're all part of the same family but sheesh, it was Elsa and Anna facial sameness levels.

This comic finished up a couple years ago. 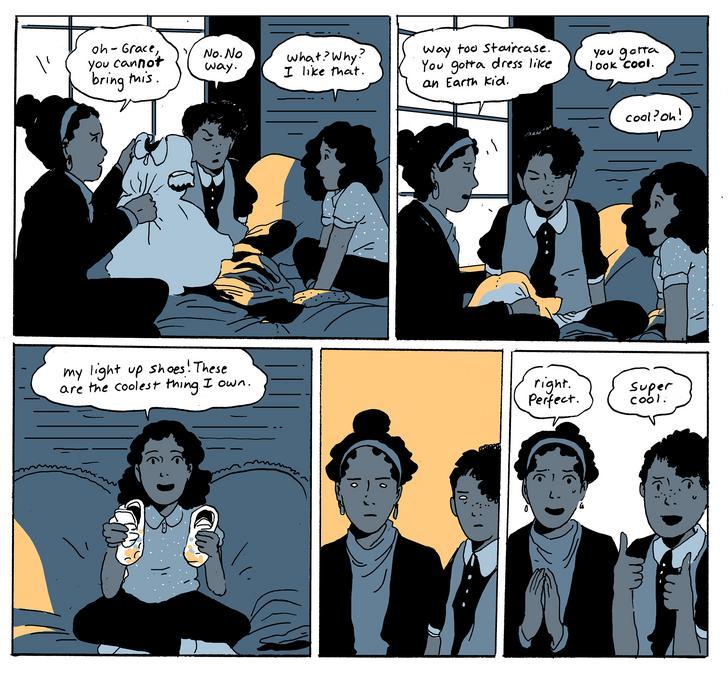 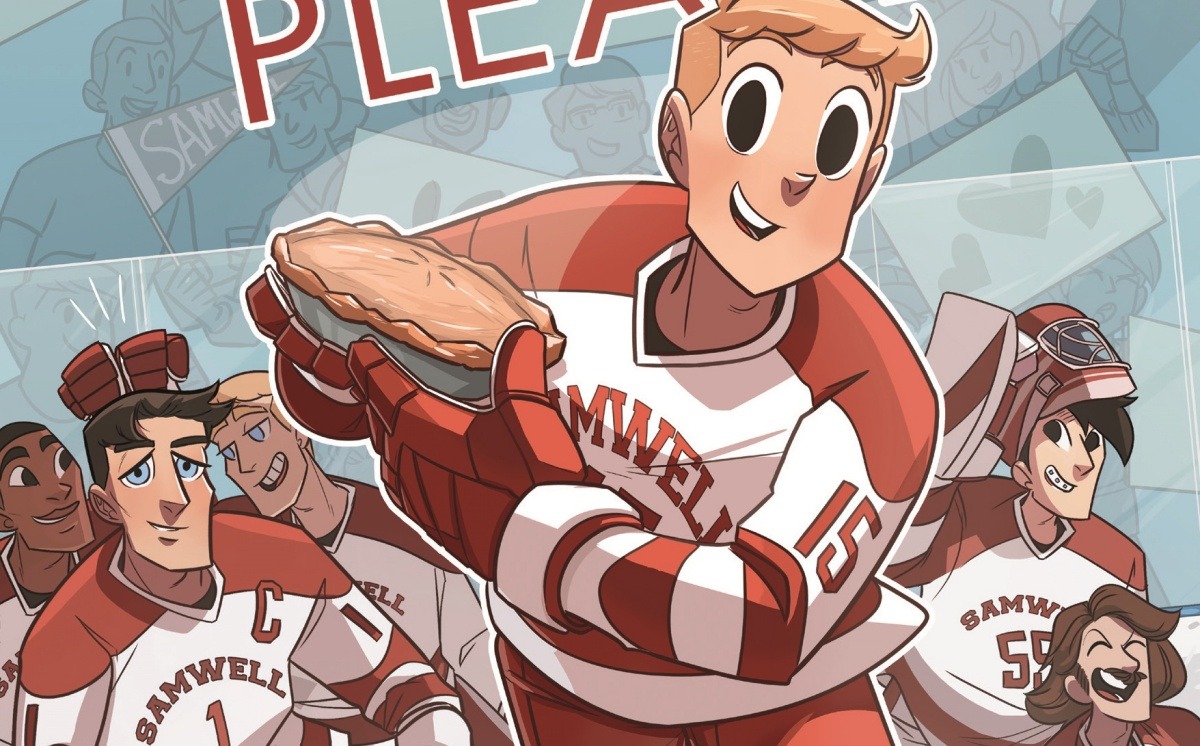 From the creator: "Just as Bitty would bake affection into a pie, I might have encoded into CHECK, PLEASE the heartfelt fondness I had for my time in college, the love of the friends I made there, and the gratitude I have for my own growth."

ABOUT:
Eric Bittle—former Georgia junior figure skating champion, vlogger extraordinaire, and amateur pâtissier—is starting his freshman year playing hockey at the prestigious Samwell University in Samwell, Massachusetts. And it’s basically nothing like co-ed club hockey back in the South. For one?

It’s a story about hockey and friendship and bros and trying to find yourself during the best 4 years of your life.
From me:
Are you okay with reading a comic with mainly guys just because the main character is gay and has a romance? Then you'll probably be okay with reading this! If not, don't do it. You will not survive the sausage fest.

I started reading this in 2014/5 or so and then dropped it since it was only on tumblr at the time and I didn't understand how I was supposed to read it. I'm old :( Last year I found the first book for this comic in the library, checked it out, and liked it a lot better the second time around. It's funny! And sweet! And I would DIE for Lardo aka the first important female character that shows up. It's like Lord of the Rings but make it hockey (because all the characters are male except, like, two. Not because anyone is obsessed with a ring. They're obsessed with a cup?? i still have no idea what hockey is even after reading this tbh).

This comic finished up this year. 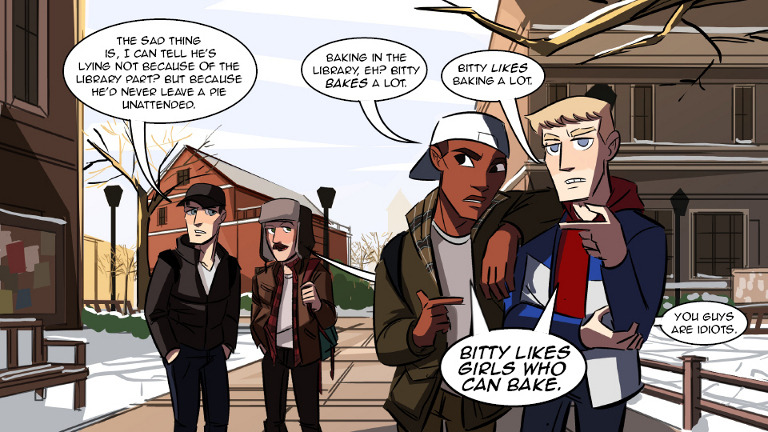 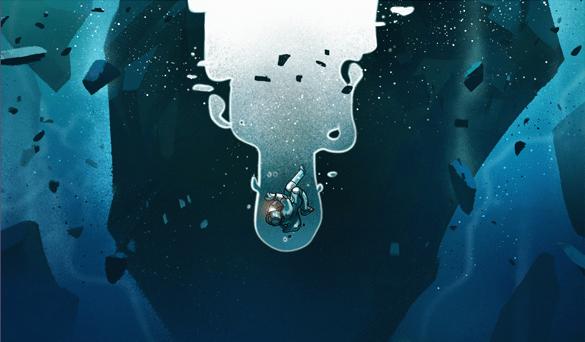 From the creator: "Personally I’m writing for a reader like me, the third type [those kinda going with the flow of both a literal story and a meta story], who enjoys making intuitive leaps and chewing over stuff, but doesn’t always need every answer."

Mare Internum is an award-winning online science fiction graphic novel about the isolated inhabitants of the planet Mars, and the ability of life to persist through darkness. (same creator of The Meek! an unfinished webcomic... she says she'll update it though......)

From me:
I had a lot of ups and downs in terms of emotions with this comic, but the ending really felt like a catharsis. I loved both main characters and the animal/alien sidekicks. The, uh, body horror was AHHHHHH at first but I got used to it and I'm someone who freaks out pretty easily about that kind of stuff. It might have had to do with everyone calling the body horror things cute pet nicknames in the comments.

Just don't read the comment section after the page that is posted on the date 45 was elected, people get really terrible. (The two main characters are a non-straight white guy with some triggering/mental health issues and a Nigerian woman who has a different desire coinciding with motherhood. People were not kind to the woman.) No spoilers: I just remember that the page that was posted on that day made the election sadness even worse - not sure if it really hits you like a punch in the gut if you're not reading the comic update by update, but back in the day it was an emotional MESS. 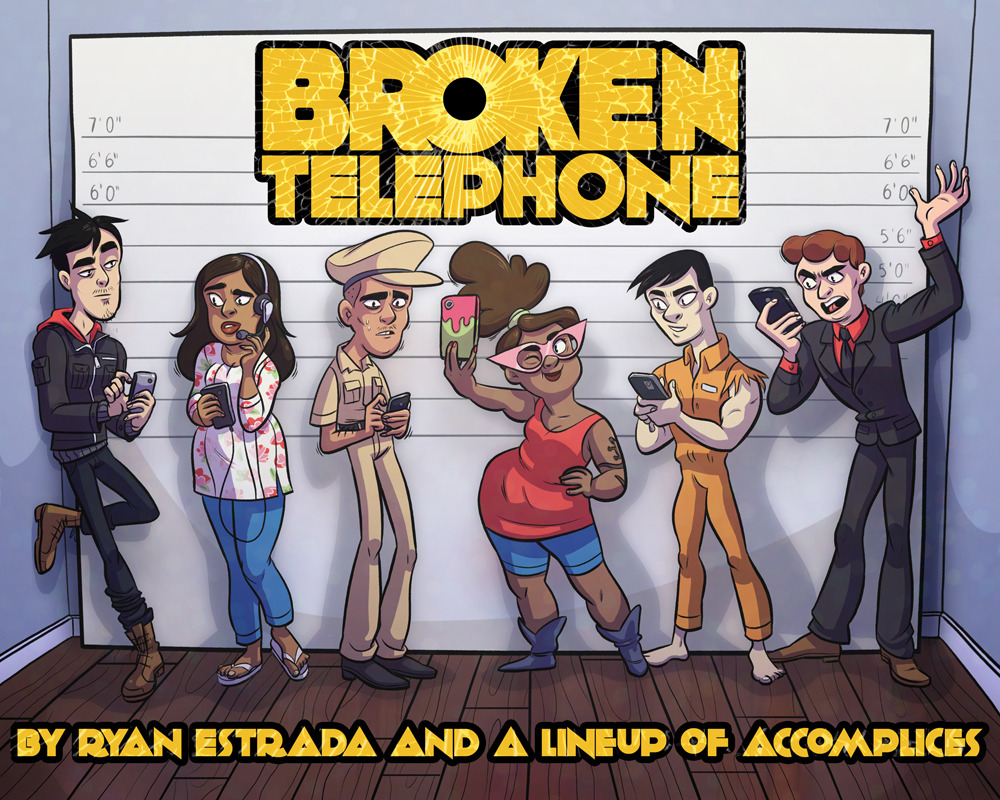 From the creator: "In order to make it, I spent eight years traveling the world, researching law enforcement loopholes, as well as investigating (and occasionally committing) potential perfect crimes. I'm probably on every government watch-list there is for the bizarre Google-searches this book brought on.

But this book would be nothing without my amazing artists. Each chapter is drawn by a completely different team of artists, to reflect the different points of view of each set of characters."

The story begins with a woman in a call center in India who overhears a murder during a customer service call. After that it gets a little bit complicated...

There are no true good guys or bad guys in this story. Or, more to the point, there are six good guys and six bad guys... but they're the same six people.
From me:
This comic is a rollercoaster. By the time I got to the end and realized what was happening I let out a "holy shit" because lol whoops @ these characters. The events are planned really well, and the different art styles and characters are interesting. Some chapters may be hit or miss due to the different art styles and pespectives though, depending on your preference; however, they are all necessary to connect the events that happen. This comic also made me realize I can have a morbid sense of humor more often than not.

This comic finished a couple years ago or so. 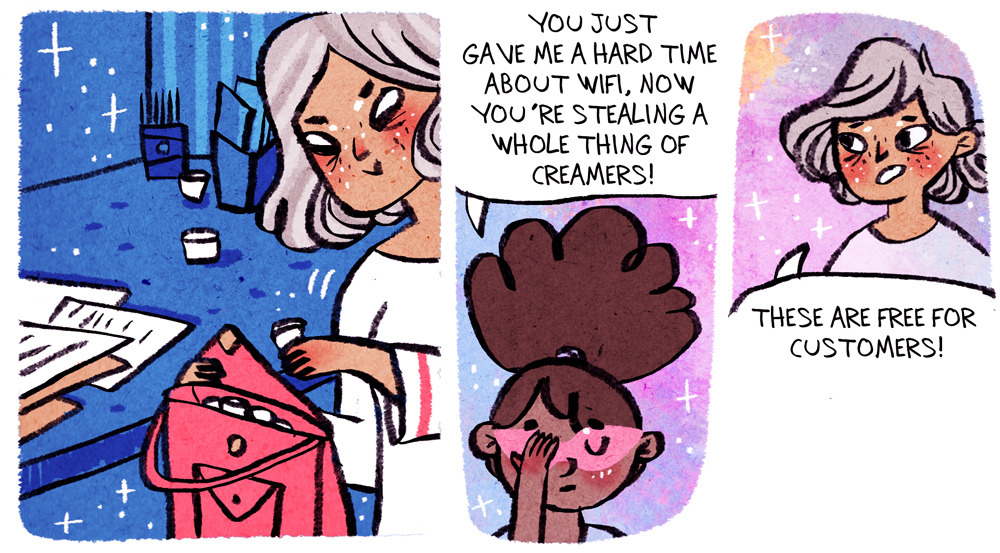 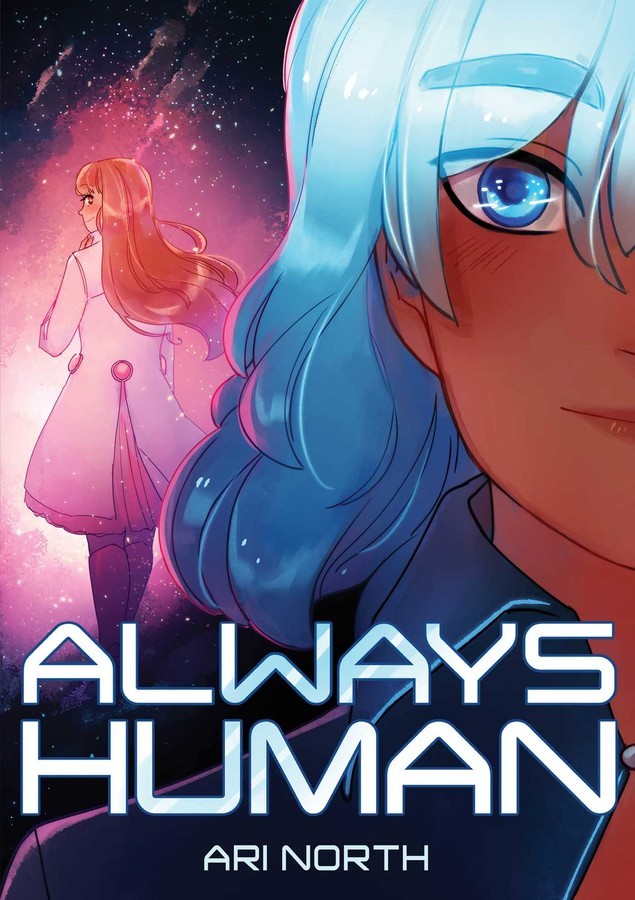 From the creator: "Thanks." (I got lazy also she doesn't really say anything about this comic?? idk sue me, she really does say thanks at one point tho!)

This is a story about nanobots, genetic engineering, and two girls falling in love. No matter how technology changes us, we'll always be human.

From me:
I got hooked the moment the main character reminded me of Korra from The Legend of Korra tbh. Also the colors/art is pretty and it's just a pretty relaxing comic to read, especially if you're in it for the f/f romance and soft sci-fi elements. Also also who wouldn't want to live in their world with that technology?? I could finally change my hair color without killing it with bleach! I mean, among other things...

This comic finished a couple years ago. 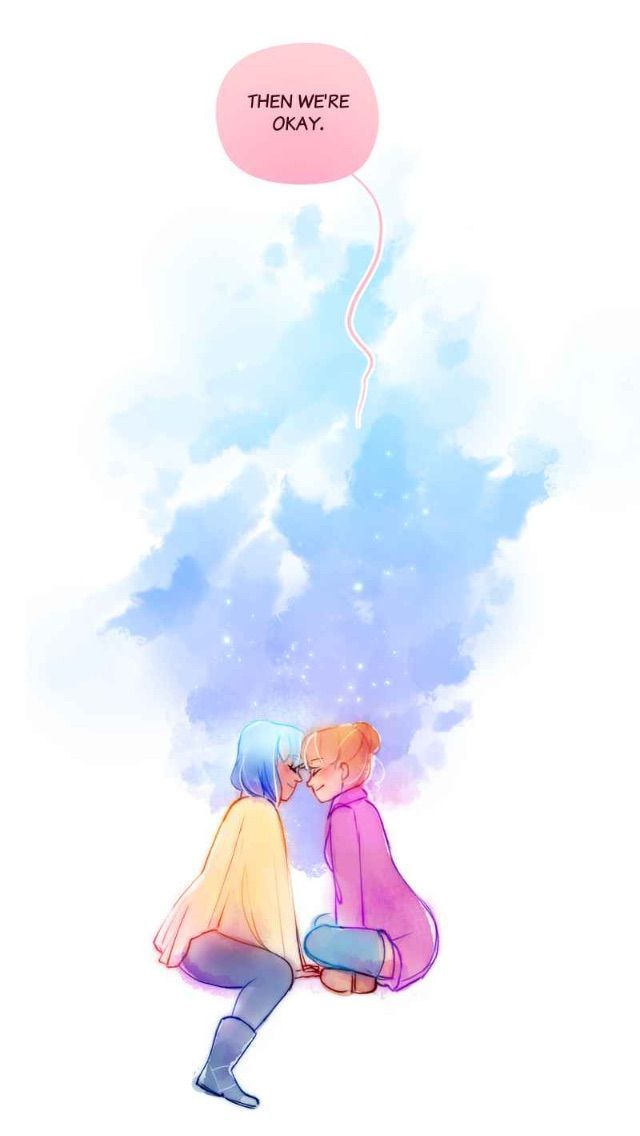 ONTD, please rec some COMPLETE webcomics to read! Keep your disgusting unfinished and/or on temporary hiatus (it's a permanent hiatus, boo, lbr) webcomics out of this already shitty post, thank you for your time

i'm sorry about the formatting being weird, please don't kill me this is basically my first post here and my computer is so old I have to cramp my fingers to click down on the trackpad lol D: