apropos of everything here is a spreadsheet of conde employees sharing their salaries and statshttps://t.co/79vGfAx9FH

xhurlyburly conducted a research study to determine whether Conde Nast is underpaying BIPOC, LGBQ, and women. But before we get into the nitty-gritty, we need to lay out some things first.
[Boring (but important) statistical disclaimers.]1. Analyses were conducted using a three-way interaction linear regression analyses.
2. 4 entries were excluded due to exceedingly low salary (< 10000 USD) without clarification in the notes/comments (e.g., salary reported by day/week), as it's unclear what the intended salary is for those entries.
3. Gender non-binary/gender fluid was excluded from analyses due to issues with low sample size for this group in the context of conducting analyses (Long story short, the interactions/intersectional identities we're looking at requires a sizable sample across all combinations. However, non-binary/gender fluid only had a sample size of 7, so I strictly looked at man/woman for gender identity. Similarly, analyses with non-binary/gender fluid by itself is also not feasible due to sample size.
4. The following variables were used as covariates to control for confounds: transgender, years in role, years of experience, number of indirect reports, and number of direct reports.
5. Unfortunately, I was unable to categorize titles/job roles and control for it as a confounding variable due to unfamiliarity with the field and how jobs should be grouped together.
6. Data reflects what was on the Google Sheets as of 3:04PM PST 6/15/2020. 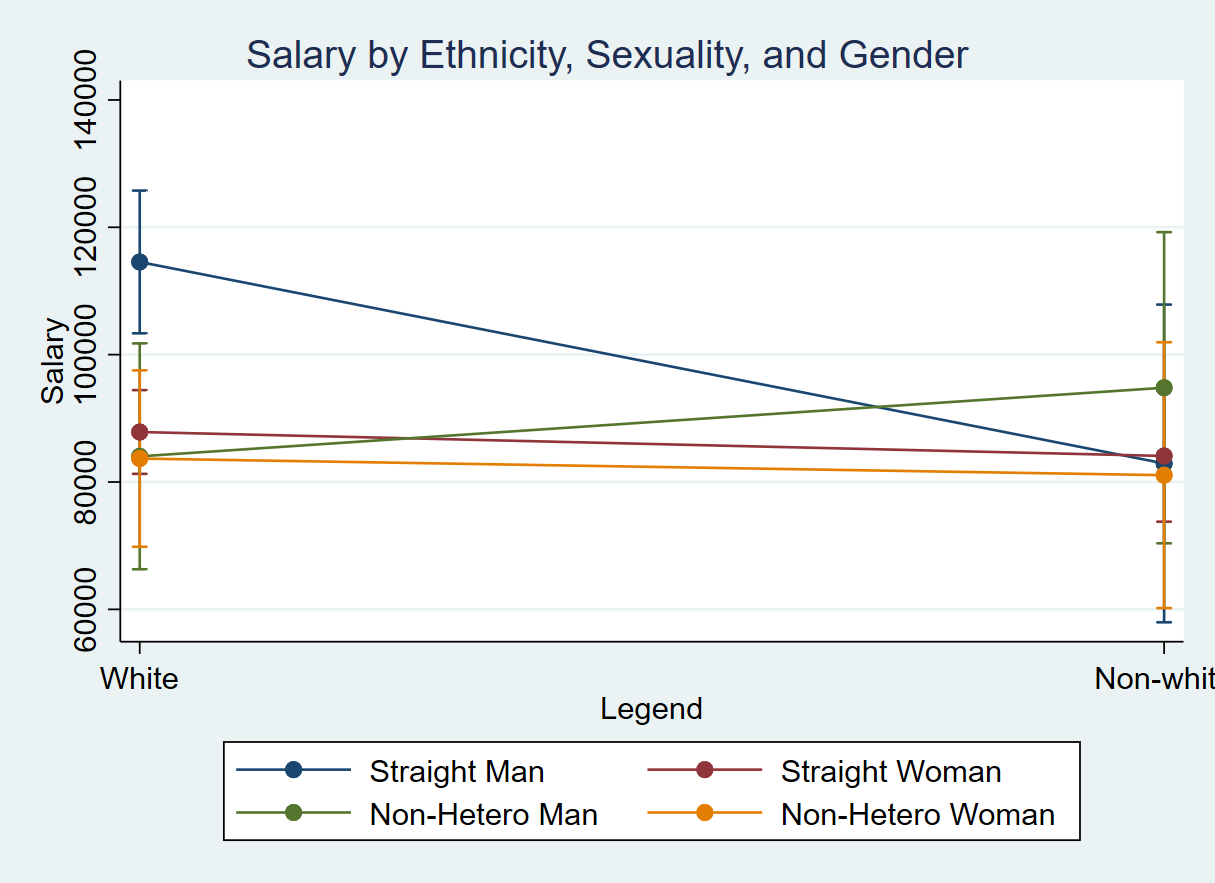 1. The three-way interaction is marginally significant (p = 0.98), indicating a trend such that there is a difference in salaries between whites and BIPOCs that is dependent on gender and sexuality. Although this is not statistically significant, it should be noted that three-way interactions require lots of power to detect a significant difference. The fact that a sample size of 198 already reached marginal significance would suggest that it may simply be a sample size issue rather than a lack of findings.
2. The first thing to note from the graph is the blue dot on the far left side. This is the average salary of a straight white man, and it is much higher compared to everybody else.
3. There is a large gender gap between straight men and straight women if they're white. However, this gap diminishes if they're both BIPOC (but either way, significantly underpaid compared to white straight men).
4. There is a general trend of a pay gap between white and non-white counterparts. The only exception is non-heterosexual BIPOC men. However, a deeper analysis of why this is occurring is interesting. Below is a chart of the average salary for men by sexuality and ethnicity with standard deviation. 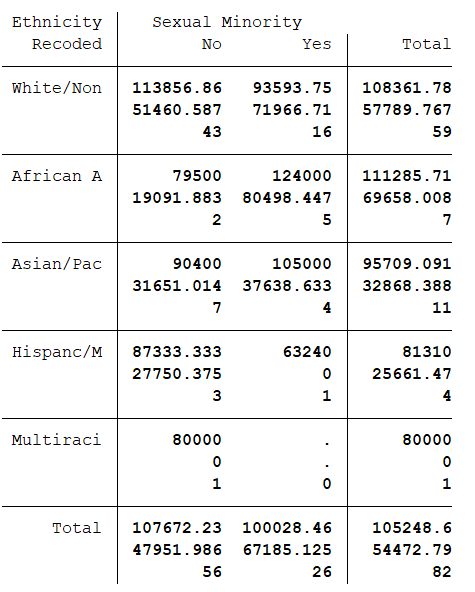 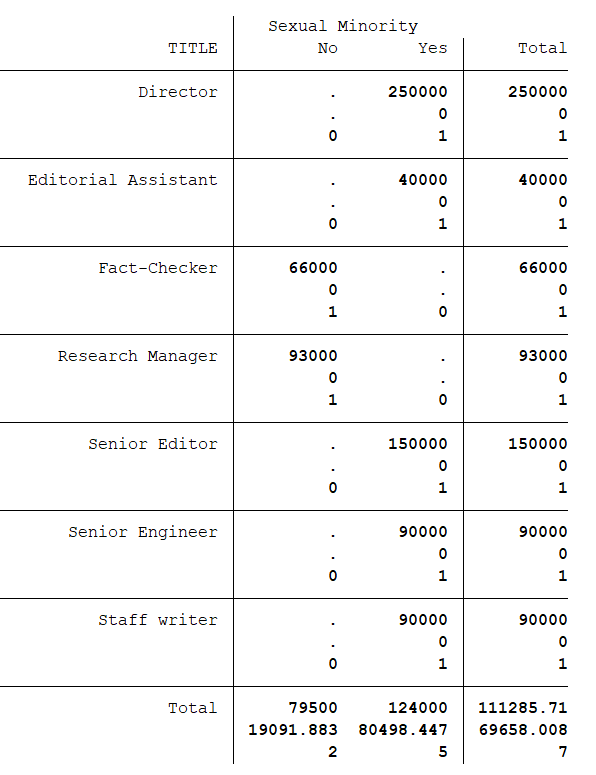 For African American/Black men, it appears that the unusual pattern is largely attributed to a director with a much larger salary compared to everyone else. It also looks like fact checkers don't get paid well. 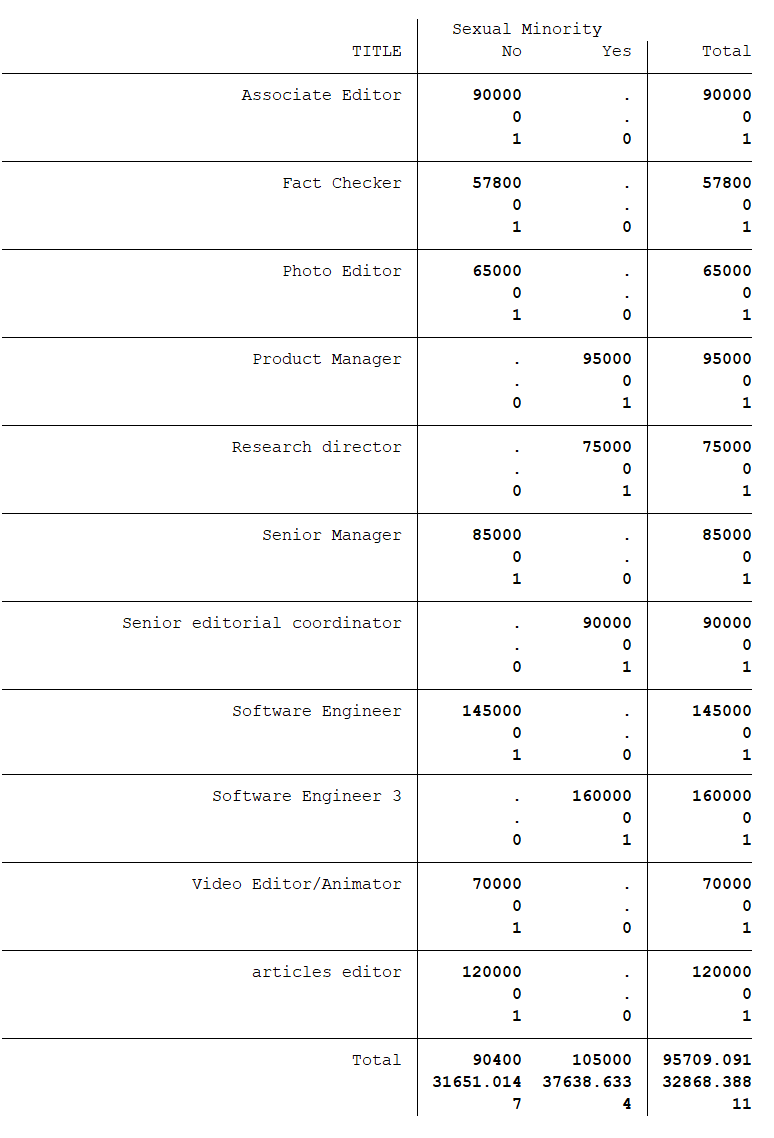 For Asian/Pacific Islander, it appears that the lower salary among straights can be attributed to including a fact checker and photo editor: two roles that are paid less compared to other roles.

Conclusion:
It is exactly what we expected: Conde Nast is underpaying those who are not white straight men. Are we really surprised? On the one hand, a limitation to consider from this study is that we did not control for title/role because OP is too stupid when it comes to the corporate world. On the other hand, I would argue that even if including title/role as a confounding variable would make our findings non-significant, it would indicate that there is still a problem with underpaying POC, women, and sexual minorities due to restricting the highest roles to white straight men. Regardless, this provides supporting evidence that these pay discrepancies are not imagined by those speaking out. It should also be noted that this is simply self-reported salary and does necessarily include video appearance costs that Sohla mentioned. In other words, this discrepancy may be even greater if we account for income outside of base salary.