Behold, the great short film of Hottie from "Rock of Love" 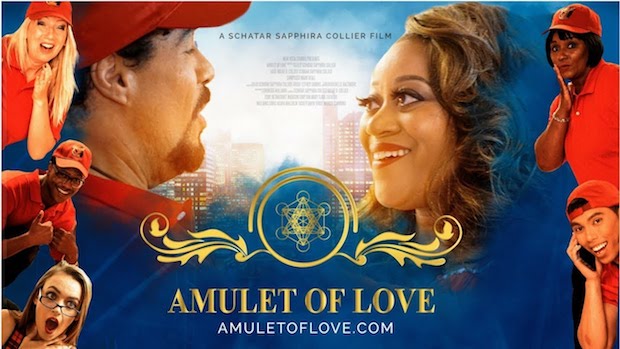 Are you aware that the iconic star of Flavor of Love, Hottie, created her own musical? Did you know that it is only 8 minutes long and it is on YouTube? Well, what the fuck are you waiting for?

It is entitled Amulet of Love.

The opening shot is Hottie singing a wordless tune with lipstick smeared on her teeth.  Some community theater rejects great thespians have an opening "song" where they dance around carrying cardboard boxes.

Enter the love interest, a guy who looks like the floor manager of a pawn shop.  His hairdo is a... jheri curl? Relaxed afro ponytail? Perm?


Hottie "plays" (this is a very generous use of the verb) Alexis Hamilton, a superstar who yearns for love but can apparently only afford $10 Amazon wigs.

Hottie strides through a an empty hallway filled with ghostly applause. Through two eye sockets of raccoon makeup, she stares forlornly at a fake Oscar. The camera pans dramatically at some cheap statues meant to symbolize awards. She has a fantasy in which she jogs against a green screen projected with balloons, then dreams of a mysterious clipart moon with a Renaissance Faire-looking design projected onto it.

Just sample some of the lyrical greatness of the music:

Though he is naught but a poor delivery boy, Hottie falls in love with him. But then, the twist: he is actually rich!

At one point, he dramatically sings, "I'll never leave you, gurl!"

The closing number is called "Epic." It involves making everything epic.

The credits roll. The mastermind auteur behind this contemporary opera is none other than Schatar "Hottie" Sapphira.

If u are too lazy to watch the entire 8 minutes, don't worry. I made gifs: