BTS' SUGA thanks COVID-19 for letting him finish mixtape, which includes a Jim Jones sample 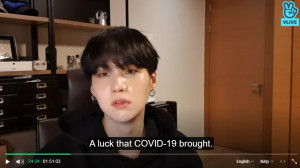 - BTS rapper SUGA went live on thursday to talk about his new mixtape under his Agust D moniker, D-2
- SUGA commented that because of schedule changes caused by COVID-19 he had time add two extra songs and film a music video for 'Daechwita'. "A luck that COVID-19 brought. Not because of, but thanks to COVID-19, we have 'Daechwita'. If we were still touring I wouldn't have been able to shoot the music video."
edit:

- During the peak of the COVID-19 outbreak in South Korea, SUGA donated 100 million won (US$82,297) to the Hope Bridge Korea Disaster Relief Association, according to the association.
- D-2's third track 'What do you think?' opens with a sample of one of Jim Jones' sermons

- Jim Jones was the cult leader who led a mass murder-suicide of his followers in his commune at Jonestown. Of the 909 people who lived and died in Jonestown in November 1978, the vast majority (around 70%) were Black people.