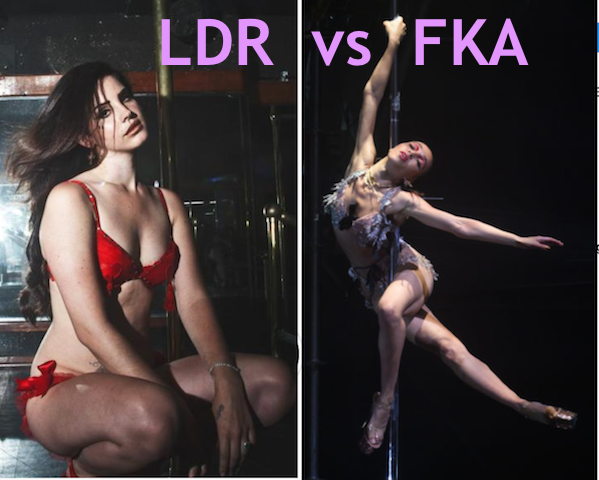 Lizzy Grant, known by the racially ambiguous name Lana del Rey, is in her feelings that her pole dancing is not considered art a la FKA Twigs. So, for a fair comparison, here are side-by-sides of Ms. Grant’s pole dancing vs. Ms. Twigs’s.

Lana’s long music video short film “Tropico” showcases her pole “skills.” The shots are almost all closeups of her torso or other body parts. This is to disguise the fact that the only “dancing” she does is some angsty wiggling.

The movie is 30 min long, if you want to watch it.

Or, here are gifs of pretty much her whole performance. Yes, her whole stripper performance is just a few gifs long.

We do see one shot of Lana doing a wannabe back bend. She doesn’t actually put in the flexibility to bend backwards, just clutches the pole and leans back until she’s like 60 degrees-ish to the floor.

In a way, Lana’s performance is more authentic to true stripping, because most strippers are not great pole dancers. Many strippers are drunk and high af and are just there to make money. Which is great! Which is also what Lana does.

But, hey: there is one thing that would make me NEVER call Lana a stripper. It’s because in the video, SHE PUTS HER ACTUAL MOUTH ON THE DAMN POLE. GIRL, think of all the stripper pussy and ass that has been on that!!!! No stripper would EVER actually do that*

*unless she was high af or incredibly dumb, of which Lana might be both.

Contrast this with FKA Twigs, a trained gymnast and ballerina who puts in hours of practice in pole dancing. Her music video for “Cellophane” features gorgeous pole work as well as incredible floor work.

Now, you might say, “But frejasface, that’s just a music video. She could have had a stunt double and it could have been heavily edited.”

In this performance she even gets 6 to 8 feet up the pole with no pads under her.

But here’s another reason why audiences might not take Lana’s pole skills seriously: she only ever did it in one video, very half-assedly. Twigs has incorporated pole art into numerous shows, even posting footage from her training sessions on social media.

It is true that many people use derogatory terms for female performers who choose to be sexual onstage. However, Lana clearly feels that being compared to a stripper is an insult. She deliberately plays a stripper in her short film to gain some edgy street cred, but does not want any actual connection to strippers, considering the term insulting.

Another thing: audiences & critics who have called Lana a stripper perhaps made this connection because she was playing a stripper character in an actual strip club. Twigs’s dancing, however, is completely divorced from strip club culture.

Also, unlike Lana, who seems to feel that being compared to a stripper is an insult, Twigs has never distanced herself from strippers. She simply presents pole dancing as an art form that can be highly skilled and respected.

EDIT: Twigs even held the release party for her album Magdalene at Cheetah's, a strip club in L.A.