Queer as Folk US' 20th Reunion Raises Over $20,000 for LGBTQ+ Centres Around the World 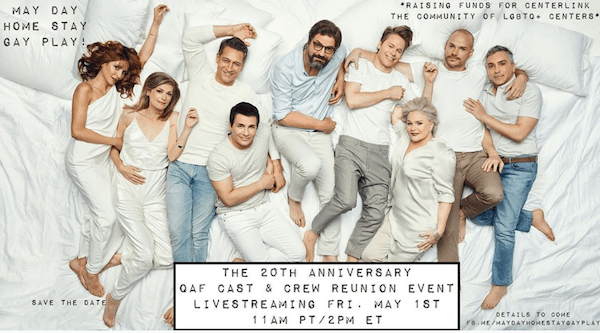 Scott Lowell (Ted Schmidt) organised a 20th anniversary online reunion for the US version of Queer as Folk in support of CenterLink — the Community of LGBTQ+ Centers. CenterLink works to assist new LGBTQ+ centers and strengthen existing ones around the world, including in Canada, the USA, China, and Australia. Lowell hosted the entire four-and-a-half hour reunion special with support from Peter Paige (Emmett Honeycutt).
Other cast members who appeared to reminise about the landmark series included:

The reunion also included conversations with the writers, producers, hair & make-up crew (one of the highlights), and even a quick visit from Russell T. Davies himself, the creator of the original UK version!

In the end, they raised over $20,000 from the broadcast alone for CenterLink and there are currently a number of special items connected to the show being auctioned on CenterLink's site. A second auction will go up on Monday and will include items that cast and crew spontanesouly decided to donate during the reunion (including a bunch of Debbie's t-shirts!). Donations are still being accepted here.

Reunion Video
CenterLink Information
CenterLink Donation
CenterLink Auctions
I loved every single moment of this entire reunion and made sure I donated. Also, Randy Harrison hasn't aged a day and still looks incredibly gorgeous (plus, he was fantastic in Cabaret a few years back)! For anyone else who watched the reunion, what were some of your favourite moments? And what were some of your favourite moments from the series itself?