My darlingssSS, after a wee break your favourite Snakey is back with her suggestions yay! Some of us have been quarantined for over 40 days, and it is starting to affect moral. This is why today I'd like to suggest something that will allow us to escape from our grim reality for a bit, something so funny and ridiculous and happy that will give your day a different flavour. Ladies and Gents, today's rec is:
GINTAMA

Why should I watch it?

Ridicously sexy Gintoki lives in feudal Japan, in a timeline where aliens have invaded earth and live among humans. Gintoki is an unemployed samurai who has an odd jobs "firm" and does anything that pays, which of course leads to hilarious (mis)adventures. Gintoki and his crew are the heroes we need for a bit of escapism.

Where can I watch it?

ONTD Health check: darlingssS, how are you dealing with the situation? Do you have someone to talk to? Are you sleeping enough, drinking plenty of water and doing a bit of exercise? Have you watched anything good lately? 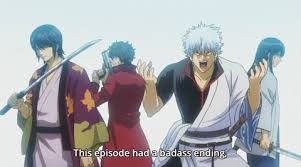