On Twitter, the hashtag #IStandWithLesbianBabadook is currently trending but not for anything that has to do with the 2014 Australian horror film.

A twitter user by the name of @lesbianbabadook posted a meme about being sad that they'd have to put the voice actress of She-Ra in a guillotine when the class war starts in response to a tweet of Aimee Carrero's (Elena of Avalor / She-Ra) that seems to have been a response to Bernie Sanders' supporters voicing their displeasure over Joe Biden after Sanders suspended his campaign.

They didn’t have the exact shoe I wanted so I think I’ll walk on a bed of nails barefoot for 4 more years. 🤷‍♀️

Aimee Carrero quote retweeted the meme with the following.

She’s so brave to block me. Here is the tweet in case she deletes it: pic.twitter.com/oVBmWe3uak

Fans are criticizing her for publicizing a much smaller account's handle and essentially siccing her followers on the person as well as being thin skinned and not considering her own class privilege. Hence, taking a stand with user @lesbianbabadook, who has since gone private. Carrero tweeted the following in response to those criticisms.

Also her initial reply to the original tweet, and Carrero's husband joining in.

The va’s husband has also joined in on trying to reach out to lesbianbabadook pic.twitter.com/WR6927kE68

source:1/2/3/4/5/6/7
which celebrity will you regret having to put against a wall when the class war happens?
Apparently, this is a Tony Hawk meme? 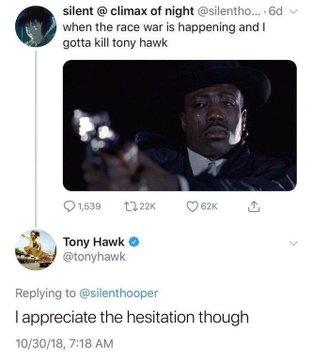