Orlando Bloom got his son's name in morse code tattooed...and it's spelled wrong

Orlando Bloom decided to get his 9-year-old son Flynn's name tattooed in morse code on his arm along with his birth date and time. After posting the tattoo on Instagram, several people pointed out it doesn't say "Flynn", it says "Frynn".

The tattoo artist posted the tattoo on his instagram and acknowledged the mistake, saying the extra dot needed to correctly spell Flynn will be added.

I still remember Ashley Greene got a tattoo on her foot that said "LIFES A DANCE" without the apostrophe and I dont think she ever fixed it even though it's huge and plenty pointed it out lol.

this reminds me of my AP US History teacher whose parents intended to name him Emil but the doctor misspelled it on the birth certificate as Ermil and he didn't know this until he was 16 and went down to get his birth certificate to get his driver's license, and instead of doing the logical thing of changing his name or just continuing to go by Emil, he was like, "well I guess I was wrong all along, I'm Ermil" and went by that the rest of his life

he was the weirdest cat, I learned nothing in that class

Something like that happened to me! I spent most of my life thinking I had a middle name but when I was 16 and getting my birth certificate ready to get my driver's license, I found that my middle name was not on it. I asked my mom about it and she told me that since she and my dad didn't speak English when I was born, they had my teenage cousin who dgaf fill out the paperwork. She accidentally put me as a boy so on my first birth certificate, I was listed as a male. When my parents had it corrected, they forgot to put in my middle name and never noticed.

lol my APUSH teacher was crazy too. He and his wife were part of an MLM selling acai berry drinks or some shit and he'd always come in telling us how we needed our Omega 3s. He showed us Dances with Wolves and jumped up in down in front of the TV when there were sexy bits instead of just...fast forwarding. My god.

Lol I didn't know he had any children so I sat here thinking, 'wait a fucking minute! When the fuck did Katy Perry give birth!!??' Omg 🤓

lmao oops. i guess as mistakes go, its a pretty easy fix, but still. they couldn't have triple and then quadruple checked the shit was right before the tattoo started?

anyway, timely post because i'm trying to get my shit together to email an artist about booking an appointment. her work is soo beautiful, so i'm keeping my fingers crossed that she can get me in.

My favorite misspelled tattoo was on that MTV show Sorority Life (I can hear Michelle Branch singing the title song right now). Julie aka Jewelz decided to get a tattoo of her own name. Her pledge sisters did not particularly like her but they went to the tattoo place with her.

While she was being tattooed, one of them noticed that the tattoo artist was tattooing JEWLEZ instead of JEWELZ. None of them said anything to Julie or the tattoo artist. I tried finding a picture of it but sadly came up empty handed. Sometimes I randomly remember that this happendd and start cackling.

I would love to rewatch that show. I can't find it in its entirety anywhere.

I would think "that's nice she's jewish and gay" lmao

Tattoos used to be cool, now they're... useless

Yes. Mine on bicep was on purpose. It is La Mort. But it has a upside down exclamation point that looks like a i instead of ¡. Lol. But the tattooist left a point dot after it, thinking it was "La Morti." Lmao. It’s fading now, so I can get a nice little tattoo to cover it or just a line. I have another tattoo read backward on my left back shoulder to remind me that it’s okay.

The other play-word I made up, a nickname for myself which had a deep meaning to me when I was a bb angst-ridden kid. It is a combination of a ~misspelling~ for zombie. It was combined French so "vie" is there. It just means Zombie Life LoL. Easier to correct it if I feel like it but nobody cares. It’s mine. It’s on my cubital fossa below the vein. Like, that’s where I do most of the blood work. Im into needles. I never have been on heroin nor plan on it so yes, that’s the spot... I was a bb. 😑

My first tattoo at age 18 is like Sienna’s! but my hometown tattooist was like nah that’s like the size of a dime and we got into it so they were like lemme make it better tbh! it turned out the size of a penny, spread out a bit and has a thin outline. Look like a fucking Dragonball’s three stars or shit. Lmao 😕: 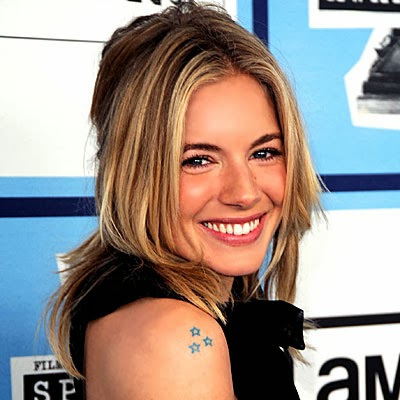 This is weird...a friend of mine recently got her daughter's name tattooed in Morse code on her arm as well but it was correct.

Aesthetically, that's really nice looking. But lmao at the misspelling.

Lmao I love when people get a tattoo of a language they don't even know and it's misspelled. Bonus points if it's Japanese

Nothing is misspelled on my body, as I dont have any words or decipher symbols.

I mispelled my name in an embroidery once