about the issues surrounding mental health, the use of inflammatory language in this way is offensive and potentially harmful.’


It’s clear from my conversations this morning that BOTH brothers are deeply, deeply unhappy about suggestions that Harry feels he has been ‘bullied’ out of the Royal Family by William.

Catherine was followed on the school run in the morning. The article with the photos got deleted.

The article mentioned in the statement has info that:

- apparently according to Harry, William was "insufficiently welcoming towards Meghan",

- brothers relationship has not recovered,

- H&M are tired of “constantly being told their place”,

- allegedly Meghan wants to leave because things are not working out for her,

- Harry is under pressure to choose,

- Meghan was seen without any rings (including her wedding ring) while visiting The National's Dorfman Theatre in London and taking her flight back to Canada.

This whole thing is so bizarre and embarrassingly public. During all the engagement/wedding craziness I kept thinking 'even becoming a duchess is not worth all this bullshit,' and it seems I was right. D: Throw the whole monarchy away.

Something rather odd has just happened at Sandringham. And it’s nothing to do with #HarryandMeghan.
Given it’s a private estate, I suspect the man with the mega-phone will be sent packing soon pic.twitter.com/VZYzknahpX

Not gonna lie, I have been living for this drama. I understand why Meghan would want out, the amount of vitriol and racism she had to deal with since she started dating Harry has been insane and I know people say that Kate went trough some harsh criticism as well but it's not the same, and I doubt the hate Meghan gets will stop after a few more years like it did with Kate. But on the other hand, I can't believe they want out but still want their security to be public-funded.

"But on the other hand, I can't believe they want out but still want their security to be public-funded."

Are you surprised? Royals always want the unearned benefits of their position but not the drawbacks.

I can't believe this sub is so defensive over a royal who (even with all of his benefits and advantages) was so fucking dumb he had to resort to joining the army to help kill people in American wars to validate himself to the public.

Fuck William and Harry, they're both greedy rats and leeches.

All the royal stans here (the fact that there are any is just....lol) have tried extra hard to make him look better since he married Meghan. It's pathetic. I'm not surprised in the least his dumb ass expects Canadians to foot the bill for his security.

lol at my use of "sub." I've been on MakeupAddict too much apparently... I mean "community" lol

And wasn't he in trouble because he was caught saying racist things about his fellow soldiers?

This whole drama just shows how ridiculous and out of touch all of these people. And how stupid. All.Of.Them. Including and maybe especially Meghan and Harry. Here's how this would have played out with anyone with half a brain:

1. You talk to The Queen, Prince Charles, and Prince William beforehand and lay out your case for why you want to do this. You frame it so that they can see that it is beneficial for all involved and that it helps the monarchy in the long run and helps Charles with his whole streamline the monarchy.
2. You come to an agreement with them on what works, you may not get everything you want but that's life and them are the breaks.
3. Once all parties have agreed, you allow the Queens press secretary to make the official announcement. Charles and William's offices follow suit with another glowing release about how great this is - and then you announce and release your website.

It's like Harry and Meghan continue to choose the worst possible way to do things. There are both so tone-deaf. And I'm sorry if Meghan is struggling this much, she clearly wasn't adequately prepared or generally thought that she was going to go in gangbusters, everyone would listen, and boom..change. I don't understand how two people approaching 40 could be do dimwitted.

That's what generations of in-breeding will get you.

nah don’t blame inbreeding, the scandinavian and spanish and dutch royals figured out streamlining their monarchies ages ago.

There was no reason they couldn't have done this super secretively and hashed out all the details. They both seem SUPER impulsive and I can't help but wonder that in a few months that one or both of them might regret this.

H&M PR team was Sunshine Sachs (A-list Hollywood PR - Janet Jackson nipple, Ben Affleck divorse, Harvey Weinstein). They hired them just before the african documentary. Lol. Probably it's probably reason why they have been so un-Royal in handling things and everything became more dramatic.

The part that gets me is the statement where they say, “this is what is happening” when they knew it actually wasn’t worked out, and so they were deliberately misinforming the public all as part of their little “you’re LEAKING!” back and forth that we’re supposed to care about.

lmao this is the only comment i need for this whole thing.

Is this where people suddenly remember that Prince William was Diana's best friend and that she would go to him for comforting after fights and when she was sad.

William was the one saddled with all her trauma.

Oh god yeah I mean they both had it rough but William had it a little worse especially with the divorce drama. I think I recall reading in the morton book she would be sobbing on one side of the door and he would be on the other side trying to cheer her up.

i mean, there is plenty of trauma to go around in such a fucked up situation that ends in untimely death

they all need better pr people

Damn this VF article. As cute as Harry and Meghan are together I kind of wonder if they bring out the worst in each other personality wise because some of this is just straight up rude. The queen has been pretty accommodating to Harry and Meghan but then you also read this and it seems as though they do what they want most of the time and don't really consult anyone first.

If they want to be celebrities they should just do it. I would straight up follow her IG and have definitely bought a thing or two she's worn before. Go out on your own and live the lives you want but they should not be getting any help from the BRF and Canada sure as fuck should NOT being paying their security detail. That disney video was one part cute husband one part can't look away from a train wreck levels or try hard.

He has ALWAYS been messy and this will only continue to look worse for them because they don't seem to think before they act. IDK why people are so defensive to them in here. Aside from bad/racist media coverage and her insane family they've mostly seemed to create their own issues and I feel like I've read countless articles on them both being told "this is how you should act if you want things to calm down" and they go and do the opposite.

Yep. They just don't listen. They also seemed to have some sort of Us vs Them mentality, which isn't good. I don't understand how they don't see that everything they do is just more fuel to the fire. All the people who were like they shouldn't get married, it's going to be a disaster, it's too soon, etc - are sitting back basking in the glow of "I Told You So". Harry and Meghan are their own worst enemies.

I mean a year is sort of on the fence of too soon but I could understand her being a little older wanting to try for kids. There definitely is a clock when you want a family. But yeah I'm convinced if most couples could wait at least 2 years they would really have a better sense of if they were a good fit.

some of this is so ridic lmao. like who cares if harry wanted his own caterer for his wedding

Hello! Your entry got to top-25 of the most popular entries in LiveJournal!
Learn more about LiveJournal Ratings in FAQ.

The meeting is over. The senior Royals have been seen leaving Sandringham.
We await news ...#HarryandMeghan

Statement from the Queen 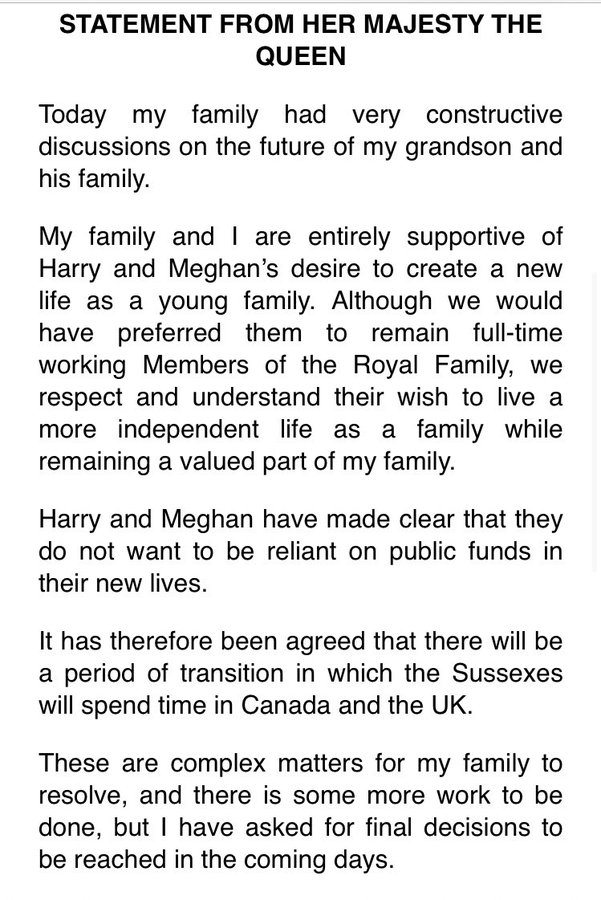 RE: Statement from the Queen

brexit talks but make it royal

They didn't use Duke and Duchess of Sussex. Simply Harry and Meghan. I wonder if they'll give up their titles.

RE: Re: Statement from the Queen

RE: Re: Statement from the Queen

lol, sure they have. This is not much different than the american taxpayer being forced to pay for melania trump's security, except this godforsaken country actually voted for her husband to be in office.

Interesting that they say "Canada" here instead of "North America" like the original statement. hmmmm

A statement from Her Majesty The Queen. https://t.co/IVSyfeojqk

Why didn’t she just release this from the very beginning? No wonder Harry and Meghan want to get away from all of this nonsense. They aren’t free to live independently under the royal family and doing anything for themselves pissing off everyone. They are entitled to live however they choose.

On the backs of Canadian taxpayers? They could've renounced their titles and declared themselves private people and live off the estimated $20-40 million they have.

edit: and yes, charity work and volunteering doesn't magically stop when you don't have HRH in front of your name

They are entitled to live however they choose.

so they should give up money they want to get? they still want money from charles and publicly-founded security. when they were marrying there were talks charles (or even the queen) having to show some numbers to american taxman because meghan is still american.

They are entitled to live however they wish but I think it was the first time they had a sitdown talk about getting less royal roles.

It not a simple family dispute. They have to talk about funding, security, visas, charities, their home -- all of which are funded by the royal family.

"Why didn’t she just release this from the very beginning?"

because harry and meghan published a website detailing things they would be entitled to without actually have permission to do so.

Ok so I've mostly ignored this ~scandal~ thanks to some travel and a cranky 10 month old, but now I want to be caught up.

Can someone give me the reader's digest version? Confirmed details?

5. It sounds like the Queen desperately wanted them to stay as FT royals but realizes that, if they want to make money, then that won't work. If correct, they remain valued members of the Queen's family, but as private people, not working royals

Yeah it sounds like the queen wants them to transition out of representing the family as royals and into just being private citizens. Which tbh I think the Sussexes will be fine with. They probably want to be celebrity philanthropists, free to make money for themselves and free to do whatever charities they want.

its really the only thing that makes sense

If they're making their own money then they can pay for their own security, period. The audacity if Canada ends up footing their bill when they're millionaires
Previous
← Ctrl ← Alt
Next
Ctrl → Alt →