For some reason, KJ did a Wired autocomplete interview.

-Not friends with Cole Sprouse (probably joking but let's believe otherwise for drama)
-He's Samoan and explains that his name Keneti is the Samoan name for Kennedy.
-Shows off his tattoos
-Thanks the autotune sound people of the show for adjusting his singing voice
-Says people call him Edward Cullen, and he considers it a compliment

------
Cole Sprouse and Adam Sandler reunite at the premiere of Uncut Gems. Earlier, Adam sounded very happy that Cole was there and joked that he wouldn't "do that to him" in terms of a Big Daddy sequel

sweet death, take me away pic.twitter.com/Tk1DoV0WfT

------
RAS posted a picture of the episode writers for the episode they're filming but doesn't seem to notice that the script page is lying in plain sight on the writer's tablet. 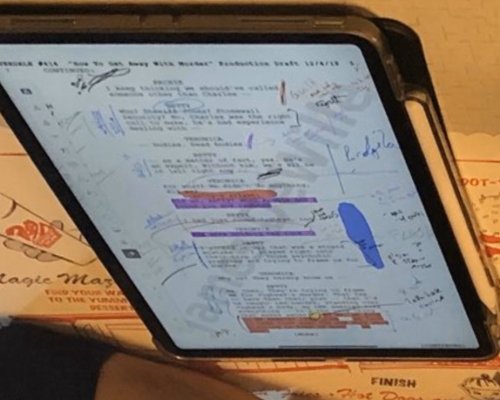 Fans have deciphered that Betty, Archie, and Veronica are talking about dead bodies and bringing Charles into their problem.
------
Lili attended the Gotham Awards