- Kings of K-pop BTS ended their first extended month long break on monday. They flew out to film a reality show and youngest member Jungkook surprised everyone at the airport with his long hair and new knuckle tattoos with the name of their dedicated fanbase. 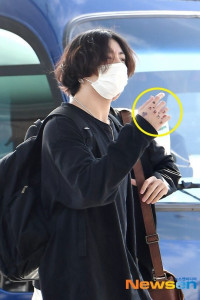 - That same morning a store owner from Geojedo leaked a CCTV pic of Jungkook with his arms around a woman. Another leaked pic showed them drinking together.

- Netizens were quick to identify the woman as a tattoo artist, and found references to him and their island trip on her instagram. The woman has since stated it was all a misunderstanding and that the two are "simply close friends."

- Amid the growing scandal, Big Hit Entertainment responded by stating that the dating rumors are not true, Jungkook was just hanging out with friends from a tattoo shop, and BH will take legal action against those who leaked the photos and spread false information about their artist.

How close are you to your tattoo artist, ONTD?