Tagline: Protect Family And Faith At All Costs

Synopsis: When crisis strikes and their world crumbles, is God reliable to meet their needs or must their faith remain blind to facts? After an innocent trip to the store ends in rioting and chaos, father of five, Rick (Kevin Sorbo) rushes home desperate to gather his family and find safety. His plans are dashed when the very same armed men suddenly appear, led by the ruthless Jack (Brian Bosworth). Caught in the deadly crossfire, the children are forced to seek shelter in the surrounding woods. Alone and vulnerable, the children's faith and family bonds are pushed to the limit, especially those of the eldest daughter, Sophie (Mollee Gray), who questions the morality of gun ownership but soon learns that in God all things are good, including her family’s Second Amendment right to defend themselves. It is now up to the children to reclaim their home, find their parents and put an end to Jack's rampage.

The film also has a second trailer, the “Faith Trailer”, which seems to be tailored to the womenfolk:

"At the heart of THE RELIANT is a love story. It’s an anthem of hope in the hardest of times, of forgiveness, and of redemption."

Right-wing superstar Kevin Sorbo is joined in the film by twins David and Jason Benham, who in 2014 were set to star in an HGTV show called “Flip it Forward”, but the show was pulled from production when it was revealed that they were homophobic (they are also rape apologists). The film is based on a 2017 novel Patrick Johnston, a family practice physician and the founder of the Association of Pro-life Physicians, who is also a screenwriter and producer of the film. In December 2017, while raising funds for the film on Indigogo, Johnston offered his own AR-15 rifle as a giveaway prize to be awarded on Christmas day. 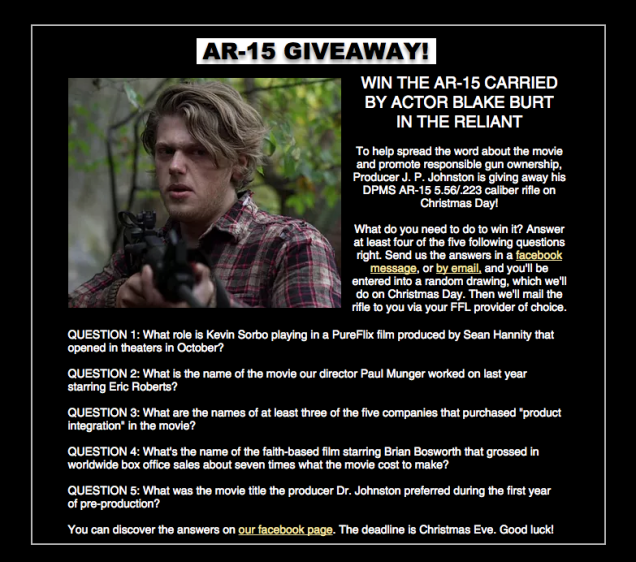 Throughout the film’s production, several guns have been auctioned to raise funds for the movie. The most recent auction in December 2018 was for the handgun carried by Sorbo’s character, which also included a one-year membership in the U.S. Concealed Carry Association (one of the films’ largest investors). A quote on the film’s Facebook page reads “Finally, an action film that P R O M O T E S the 2nd Amendment! Co-produced by CEO of the U.S. Concealed Carry Association, with Product Integration from Smith & Wesson, Doubletap Ammo, Subscription Ammo”.

The family-oriented, faith-based film suffered a setback when it was originally rated R based on gun violence, specifically a scene of a preteen boy using a gun. Author Peter Johnston notes that "there's no obscenity, no sexuality, no gore, and no horror in this movie” and called the MPAA's rating “a deliberate attempt to sabotage” the pro-Second Amendment theme. Tim Schmidt, the CEO of the U.S. Concealed Carry Association and executive producer of "The Reliant," also described the film as “family friendly” and said that "It seems the MPAA gave 'The Reliant' an R-rating due to their discomfort with how the movie depicts the responsible use of a firearm by a pre-teen boy. This boy saved the innocent lives of his own family members! It just doesn't make sense to me”. The filmmakers edited some of the more gruesome moments, including “pulling back on some of the blood-VFX… as well as clipping short two of the more "visceral" violent moments of the film” and were eventually able be approved for a PG-13 rating. Some prospective viewers were disappointed at the reduced explicit violence, but the filmmakers assured them that “The BEST news for all the fans who wants to see the more violent version of the film is that there will be an uncut version on the DVD. Probably. If we can afford it.”

After guns have been outlawed, Kevin Sorbo and his family fight their way through Black Bloc snipers, socialists on dirtbikes, and run over protestors in the streets.

This movie is going to rule so hard pic.twitter.com/03SOJ6KcvI