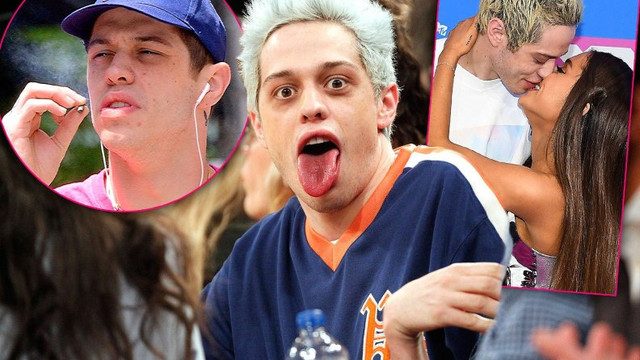 Remember Pete Davidson? He had a brief brush with fame after getting engaged to pop star Ariana Grande, which no doubt helped his Saturday Night Live career at the time. Now, the controversial comedian is currently in hot water once again for bad behavior while performing stand-up at the University of Central Florida.

Not only did he curse out students and call them slurs (including the r-word), he yelled at those who were filming him despite the "no camera rule," but someone managed to get audio of his rant, anyway. Twitter is now filled with comments from upset students who attended the event, including claims he told them to "get off [their] phone or he'd tell another pedophile joke" and that he called students "bitches and the r-word."

According to one Twitter user, after his "drug-fueled rant," he then back-tracked and attempted to turn it into a motivational speech. Someone also posted to the UCF subreddit, and dozens of students chimed in with their disgust.

pete davidson had a whole meltdown in front of some college kids and called us all bitches and r-words..... then he got pressed that no one was laughing at his lame ass jokes? girl eye- 😗 pic.twitter.com/WWNFrZ6Rnk

Demi Lovato talks about her mental illnesses and everyone here goes off about how she’s an asshole and uses her MI as an excuse for attention, but this troll continues to be a complete dick, doesn’t get any help, and y’all are feeling sorry for him

katheli
August 27th, 2019, 03:03 pm
where tho, I feel like the comments here are wayyyy more unsympathetic than they are when it's Demi etc.

lolzerz
August 27th, 2019, 08:09 pm
kanye got so many passes here for being a 'genius' and for all that taylor swift shit, but i think once he started being a trump supporter it was 100% over

erika92
August 27th, 2019, 05:21 pm
internalized misogyny is difficult for some people to operate out of

screamingintune
August 27th, 2019, 02:21 pm
this reminds me that the only MLB player who will get naked for the ESPN Body Issue is Christian Yelich, aka MLB's Pete Davidson look alike. Y'ALL. NO ONE WANTS TO SEE THIS. D:

barakat_anon
August 27th, 2019, 02:32 pm
Is John Mulaney still trying to help him out? I always found that pairing interesting, even with John’s past addiction problems. Even when they were doing shows together Pete seemed like he didn’t really want to follow in his path

anterrabre
August 27th, 2019, 03:26 pm
I'm not giving him a pass for shit. There are loads of people with bpd who don't act like this. This man is an asshole independent of his disorder, and it's why he can't keep a woman or friends or anything else in his life. He needs to get his ass in gear and get it together.

kimda
August 27th, 2019, 03:51 pm
If I ever act like this, it means I'm completely in crisis and probably suicidal and having issues with rage and hyper-vigilance. However, I have self-awareness and this almost never happens if I'm actively taking care of my mental health and recieving the correct treatment (I was put on some medications before that made it 100x worse) but I still took responsibility for my actions and accepted that they come with consequences.

Bpd blows but he's not doing a single thing to help himself. Drug and alcohol use are pretty much like putting a loaded gun to your head when you have bpd and just waiting to see if the come-down makes you pull the trigger. It's not the fucking audience's fault that he's not taking care of his mental health and that's where the whole personal responsibility thing comes in again.

Most men don't take any and men like Pete are even less likely. Thanks, Pete, for making people with BPD look like a bunch of strung-out asshole babies who get off on acting abusive, as if we need to further highlight that stereotype. /sigh

for a moment i thought it was turnabout big top bc circus but then i remembered franziska was the prosecutor on that one.

arawelo
August 28th, 2019, 11:47 pm
Sadly it isn't an actual quote from the game, someone photoshopped in the subtitles on a screenshot from the trilogy remaster. The fact that I can 100% see Edgeworth saying this is what makes it so funny lmao
(no subject) -