-His first solo debut song Danger premiered August 15, 2014 from his first EP/debut album Ace which was released on August 18, 2014.

-Since then, he released 3 full studio albums and 5 EP's. OP fell down the rabbit hole recently, and his progression as an artist/performer has been quite interesting to see over a decade.

-For his first solo debut, he said that he tried to offer some opinions about the songs/direction he wanted to go in but ultimately there were more of the company's ideas in it. His songs tend to more open about sexuality and sex positive embedded with a lot of sensuality.

-It wasn't until his next album, he was able to have a bit more leeway with his choices and his input with the music, choreography, and song choices. This is a bit lengthy but hopefully this was a somewhat of an interesting/intriguing and in-depth read of the artist!

The SHINee member opens up about his approach to beauty in this edition of Mascara & Masculinity. https://t.co/MK23NO5NrB 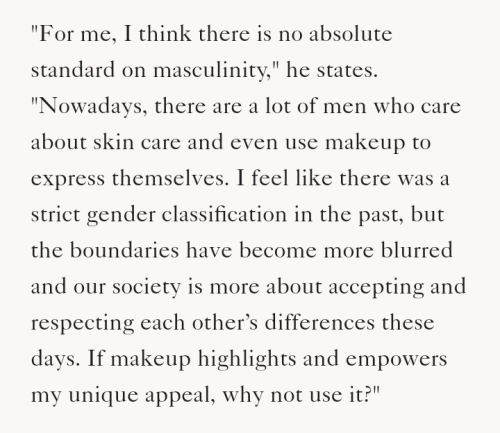 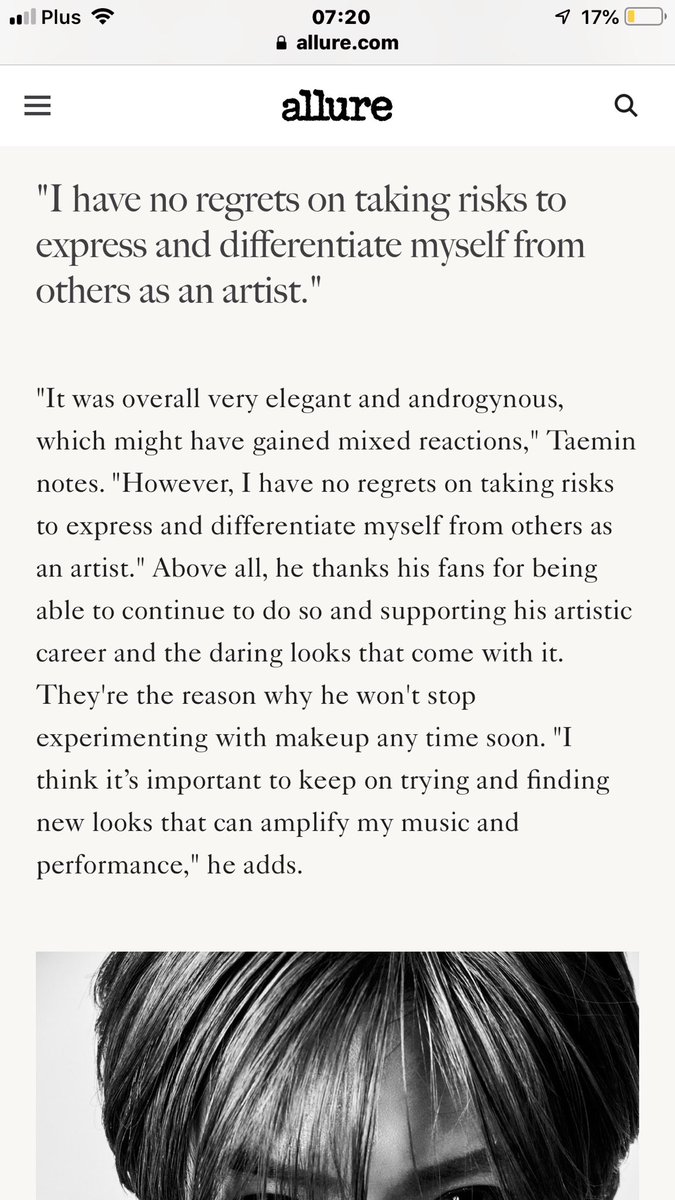 -Said that wearing makeup at first was like wearing a mask not because he was uncomfortable but because he thought he looked looked kind of cool yet a bit unfamiliar at the same time, and how his attitude towards his looks changed.

-"As I utilized makeup, I found the increasing need to build my own artistic image," he says. "The synergy created from clothing, hair, and makeup combined is truly amazing, so makeup has been, is, and will be a key factor in establishing my identity as an artist."

-"It was overall very elegant and androgynous, which might have gained mixed reactions," Taemin notes. "However, I have no regrets on taking risks to express and differentiate myself from others as an artist.

-Thanks the fans for being able to continue to support him taking on risks, and he wants to continue to keep on trying and finding new looks that can help bolster his performance and music.

-Auditioned at 11 for SM and debuted as part of SHINee at 14. Has been in the industry for 11 years now.

-"In spite of K-Pop’s ever-quickening revolving door of idols, where you’re only as relevant as your latest chart position and YouTube view count, Taemin has become a stable fixture, unperturbed by the trends that often dictate the sound of the entire K-Pop industry, instead focused on making records that wholly suit his dramatic, and often melancholic, flair."

-"Unfeasibly grounded, quick to smile, Taemin, despite the sensual stage persona and having coming out of his self-confessed introverted shell over the years, retains a certain, endearing, reticence. I also don’t want to let anyone down. Just like they have, I’ve always had others that I respected and admired, and the fact that I could become that person for someone is a dream for me.”

-Says he's more at ease and has coped better on his nervousness, and instead of comparing himself to others he wants to showcase express himself as an artist but at the same time still be special and different.

-Credits his team more than himself for his creative and personal evolution, and says debuting at an early age gave him a lot of pressure it also helped him to absorb things faster and he's now grateful for it.

-“I’ve had a lot of experience, and put out many albums. And because of that, I’ve been exposed in a particular way to the spotlight and attention. Fans and audiences have certain expectations of me and, as much as that expectation is there, I really do enjoy myself and try to have fun while promoting. And if there’s another opportunity, I definitely want to try out new concepts as well.”

For the Korean Herald:
-“Many renowned male solo singers have their own stage attitude, or presence,” he said. “For me, I have my own attitude. It could be more androgynous, and maybe less masculine, making some people wonder why I dance like this. And that’s how I want them to perceive, giving a fresh hunch that will stand out, if done right.”

-"He named Japanese choreographer Koharu Sugawara (His good friend) as a source of inspiration in transforming him into a solo artist with a unique style, countering the stereotype of other male solo artists in the industry that is divided between either ballad performances or singers with aggressive, masculine dance moves."

-“When I saw her, I realized this is what dance is. Her dance expression is extraordinary, and inspired me to do something that is different than other acts.”

-Also revealed Norwegian indie folk-pop duo Kings of Convenience is an act he likes and is interested in. He says that'll be very fresh to dance to this kind of music genre in the future.

-He says he is open to all types of trends, genre and classics for inspiration for his music.

-"I considered maybe inserting more catchy choreography to make the performance to stand out, but for this song, I focused more on the overall mood of the song, rather than one specific move. From beginning to end, it’s more like one piece of an artwork. I want to continuously work hard so that I can create high-quality works. Rather than focus on others, I want to create music that I am really proud of.”
Shabekuri 007: 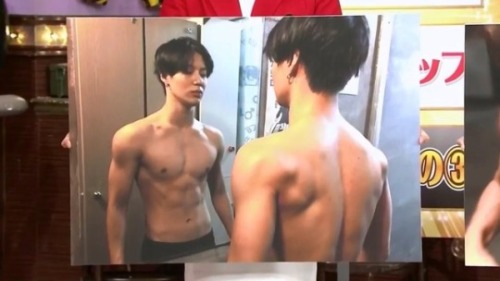 -I guess, I suppose.

-Stacey Nam (The Interviewer): "I wanted to give him the platform to speak freely and comfortably about his solo career and struggles/successes to becoming the brilliant artist he is today. And yes he is the sweetest angel ever..I've worked with him many times so sitting closely to him is not an issue lol. I think the bigger problem is every time I see him I realize even more what a beautiful person he is inside and out and that's a problem >.<."

“My strong point is a sexy and androgynous image. When I was younger, I even dreamed of a muscular macho image. But a delicate androgynous body is who I am and that’s the sort of power I express, so this is the aspect of myself I’m exploring and polishing now.”

“There is no absolute standard on masculinity. I feel like there was a strict gender classification in the past, but the boundaries have become more blurred and our society is more accepting. If makeup highlights and empowers my unique appeal, why not use it?"

“I think masculinity is kindness. I want to make everyone smile and be kind to everyone.”

taemin: in fact i've tried diverse styles with shinee and as a solo artist i don't know what else to do it seems the only thing left is dressing as a womanpic.twitter.com/pqBCwNGx6G

[Soloist Looks Throughout The Years]

“I like Shinkai Makoto’s works. Japan’s unique/ distinct feel is swirling in this movie, it gives unprecedented fresh feel. My most fav scene is clearly when Mitsuha forgotten Taki’s name. You can feel love in various scenes.” pic.twitter.com/RSk0IrIWoJ

“My most favorite among Marvel’s works. As I regret not having seen much Marvel's work so far, the CG was so great and exciting, it was fun. I want to see Marvel’s other works too.” pic.twitter.com/9Bnrilg5GC

-Suddenly his albums make sense given the sensual and sexual imagery/themes in Raw and The Lobster...

I laughed aloud when I saw their recommendations
THE DIFFERENCE OH MY GOD pic.twitter.com/m5GA749fpa

-Recommendations to listen with your family: Minho picked Despicable Me 3 OST and Taemin picked Korn The Path of Totality...
Throwback Interview During Move 2017 on Lee Guk Joo's Radio Show:
-(*The female comedian was the first to cover his dance. He thanked her years later for starting the trend, and that her dance cover is his most favorite out of the ones to come out).

-“It seems like my appearance has changed, but when I get a haircut similar to the one I had during the debut days, I look the same. Looks don’t change as much I thought they would. When I first debuted, I was shy. I was defensive at the time.”

-Shared that he listens to Rain’s “Me” when he’s having a hard time, Taemin went on to reveal that he cries more often than he used to these days. “I feel lonely from time to time. I don’t cry because of that, though. I’m not the type to cry even when watching movies. But this year has been different."

-“I’ve even cried during a conversation with the members. We weren’t fighting, but I cried while we were talking. Also, my friend was trying again in an audition show. I cried watching that.” (His friend auditioned for a competition show which made him cry b/c of how hard its been for his friend to be successful)

-Said he doesn't know if he's good looking and he joked by saying that all men are the same and they think they're handsome.

-Also said back in the day people confused him with Minho and he was flattered. He noticed how attractive Minho was when he saw a clip of him in a suit at an awards show.
Happy Together:

-Yerin of GFriend said her dance choreography was really hard compared to other girl groups, but the mixed response to her comments after her dance came off very poorly.

-Out of the male panelists who spoke, he was the only one who showed understanding/empathy to her. "It might look easy but a lot of techniques were used. For example, there was Neck-O-Flex, which is when the upper body and the leg go opposite. There were also a lot of steps."

-"Taemin: Koharu’s really sweet, looks cool and stylish like a model, but warm-hearted. She listens to me about worries, with better Japanese I could express better. Sorry, please cheer for her and a bit for me too."

-"Koharu: (laughs) he beats me as expected in comments as well as in dance! Great."

-"During an Instagram live of Sugawara Koharu, someone asked about Taemin. She answered “he’s a good guy, a totally good guy. He also likes Princess Mononoke."


[From his trainee days to becoming a soloist]

+ you can take a look at various informations & services. I hope everybody gives it a lot of interest and love. I also support autism myself. Fighting!” pic.twitter.com/xplQ9YP5Tc

-Had to put this in here his most recent charity work/support and such.