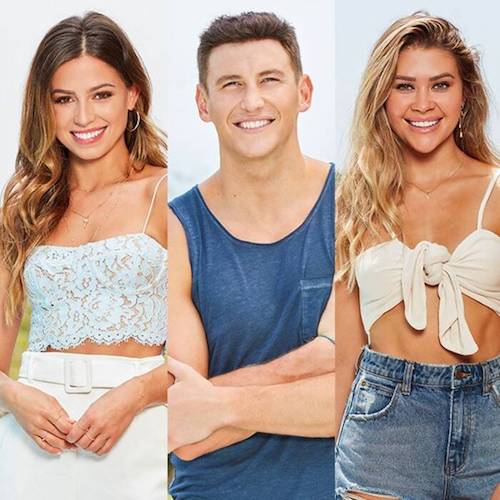 On Bachelor in Paradise, Blake was allegedly putting his spoon in all the puddings. Caelynn claims that he ghosted her, then made her keep their relationship a secret. But Blake has posted texts revealing that Caelynn was lying about their hookup.

UMMMMM GUYS BLAKE IS CURRENTLY ON INSTA POSTING ALLLLLL THE RECEIPTS THAT 100% MAKE CAELYNN LOOK LIKE A CRAZY LIAR AND IM SO SHOOK.#bachelorinparadise pic.twitter.com/zEBFRO25YO

In the screencaps that he posted (and then deleted), Caelynn insists that their hookup is "strictly for sex. nothing more, nothing less." On Paradise, she was sobbing about their supposed relationship.

Blake says that he posted the texts because he felt "backed into a corner." Also, Chris Harrison referred to Blake as "a dumpster fire."

Blake allegedly slept with Kristina at Stagecoach festival, then slept with Caelynn within the next 24 hours, stringing both of the women along. Caelynn made it seem as if Blake had led her to believe that they were dating, but then ghosted her and made them keep their relationship a secret.

Kristina confronted him for being a douchebag, but he insisted that he was just being a single guy. Caelynn confronted him while sobbing, saying that he played her and tried to silence her. He acted shocked and pretended to cry cried.