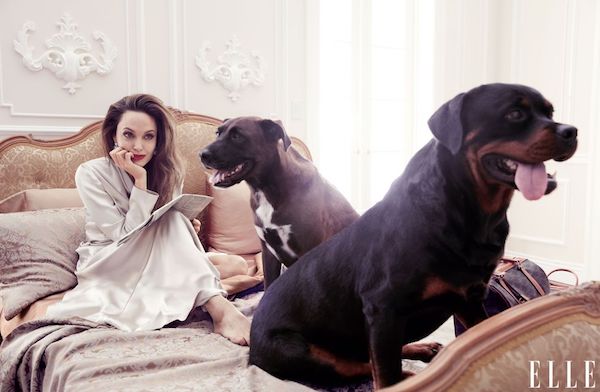 Angelina Jolie is starting the PR tour for Maleficent 2, and she wrote an essay for Elle magazine about maleficent women.

She also poses with her two rescue dogs, a pitbull mix and a rottweiler that her oldest sons chose as puppies.

An excerpt from her essay:

"Women could be accused of witchcraft for having an independent sex life, for speaking their mind on politics or religion, or for dressing differently. Had I lived in earlier times, I could have been burnt at the stake many times over for simply being myself. The accusation of witchcraft has been used to control and silence women in almost all societies and in every century." 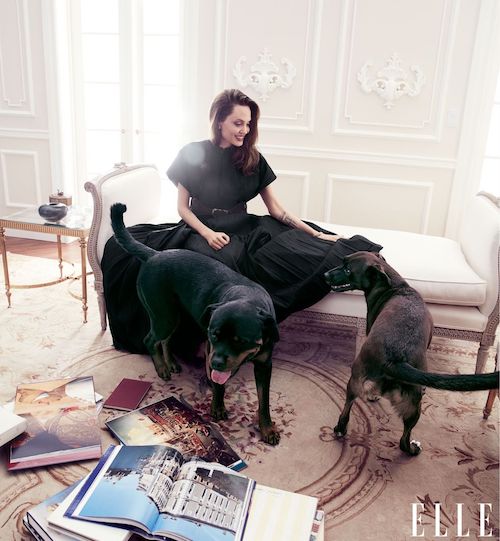 Open to: All, detailed results viewable to: All. Participants: 144

Would u have been accused of being a witch?

t_snake
August 5th, 2019, 11:06 pm
She's so beautiful.I wonder if Shiloh, Vivienne and Knox will ever be the next wave of nepotism models

muzicnem
August 5th, 2019, 11:09 pm
I’ve been getting into witchy stuff lately. Bought a cool book that’s called HausMagick and I love it.

swissbeauty23
August 5th, 2019, 11:22 pm
anything witchy/earthy/feminist/centering has been really helpful for me lately in this horrific patriarchy we live in

bellwetherr
August 6th, 2019, 03:05 pm
that book is great! the boutique its from in salem is lovely. hauswitch

analievelyn
August 5th, 2019, 11:10 pm
With all the training she is supposedly doing for the eternals, I hope there are good dietitians for her and the rest of the cast. Idk if she's active, but she looks so frail to me.

thebadunkadunk
August 6th, 2019, 01:38 am
She looked great as Lara Croft, hopefully she brings that vibe back

justleilah
August 7th, 2019, 02:42 am
I'm glad someone said something, there are so many people gushing over 'how good' she looks here. She looks rail-thin, it's really alarming :(

screamingintune
August 5th, 2019, 11:34 pm
she looks stunning and the the dogs are dorable. I love rottweilers so much. big ol' teddy bears. Great that she has dogs for her kids, too, I feel like it's important for kids to grow up around animals.

screamingintune
August 6th, 2019, 12:31 am
unf he is so hot. I love that movie Phone Booth where he's angsting in the phone booth for the whole movie while Kiefer and his velvet velvet voice talk to him
(no subject) -

babydontsweat
August 6th, 2019, 01:13 am
so it's confirmed about jonny lee? i follow him and his (former?) spouse and it really does seem like it's been over for a while
(no subject) -

black_swan87
August 5th, 2019, 11:35 pm
I saw once upon a time in Hollywood yesterday and I was really uncomfortable with [Spoiler (click to open)]Brad’s character being a dude that killed his wife and them treating it like a joke given what happened to them irl

screamingintune
August 6th, 2019, 12:32 am
yeeeikes, but that also sounds pretty typical of Tarantino

zmack
August 5th, 2019, 11:40 pm
I’m not catholic/religious, but I went to a catholic high school and I would always question the religion teacher and bring up historical points to criticize the church and tradition. So the dumbass guys in the class accused me of being a witch lmao, I don’t think they realized I took it as an honor


Which also.
So my ex called me a bitch the other day, it shook me to my core I have never been called a bitch before by a male let alone in a hostile way. It killed everything I ever felt about him even the remains. Like I’m disgusted.

fun fact: my great gma was a bruja back in el salvador and she was the reason my grandma left during the civil war and took my dad with her. she was into some dark shit and afaik, she sacrificed my aunt (she was older than my dad) by taking her to the jungle and they never saw the baby again. i met her once and she always freaked me out, no thanks

thinkweism
August 6th, 2019, 12:11 am
honestly idk. all i really know is my great grandma was a scary as fuck witch in their village and fucked with some scary ass shit that freaked everyone out. i feel like my grandma blamed her a lot for her health issues as a kid - my grandma got scarlet fever as a child and my great gma allowed it to get worse to a point where my grandma suffered from heart issues up until her sudden death about seventeen years ago. my family is pretty superstitious and whatnot, and brujeria like that is something that even me, the most "rational" and "this can logically be explained" of my family, will not fuck with.
(no subject) -