The 2019 Booker Prize longlist has been announced. Watch what our judges had to say and read more here: https://t.co/BgLFiyaEbc#BookerPrize2019 #FinestFiction pic.twitter.com/gi1Xx6oe8h

It's the UK’s biggest literary award. The Booker Prize recognises the best novel written in English and published in the UK and Ireland. Previous winners include Wolf Hall, Lincoln in the Bardo,The God of Small Things, The Remains of the Day, etc. 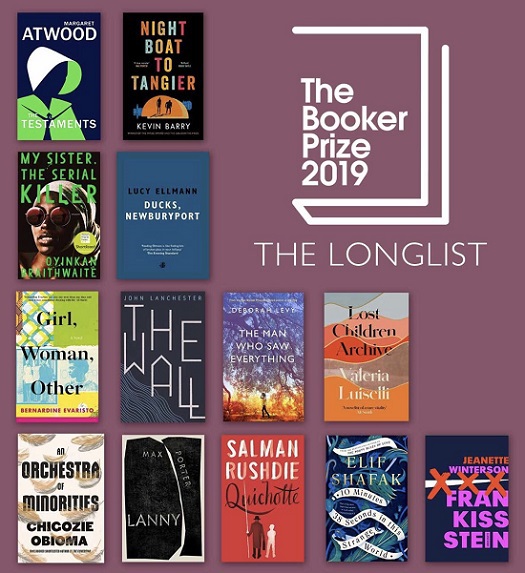 Sequel to The Handmaid’s Tale. Picking up ten years after its predecessor’s tantalisingly open-ended conclusion, The Testaments promises a new window into Atwood’s dystopian world, as seen through the eyes of three women of Gilead. Having previously won the Man Booker Prize with The Blind Assassin, The Testaments could see Atwood become the second novelist to win the prize twice in its illustrious fifty year history.

A sly, twinkling jewel of a novel, Night Boat to Tangier ripples with the kind of mordant humour and tattered romanticism that has made Kevin Barry one of the most highly respected of contemporary authors. Carrying echoes of the theatrical brio of Harold Pinter, Barry’s novel treads a technicolour turn down memory lane with menace and heart aplenty on the way. Marrying laconic Irish wit to faded Latin glamour, this tale of careworn gangsters, lost love and male friendship is rich, evocative fiction at its very finest.

Sharp, menacing and darkly funny, this debut novel from Nigerian author Oyinkan Braithwaite is not just an inventive take on the serial-murder thriller but also a tender examination of sibling relationships in an oppressively patriarchal society. A wickedly original story that turns the tables on the woman-as-victim trope, My Sister, the Serial Killer is an addictive - and hugely satisfying - read. 'Pulpy, peppery and sinister,’ as the New York Times writes, ‘this scorpion-tailed little thriller leaves a response, and a sting, you will remember.'

Through one discursive sentence spread across 900 pages, an Ohio housewife catalogues the state of the American nation under the scattershot Trump regime. A monumental feat of sustained characterisation, everyday drama and devastating satire, Ducks, Newburyport is a classic for our times and a landmark for the modern novel. Pitched by an enraptured Guardian as ‘Anne Tyler meets Gertrude Stein’, it is a book that, in stretching to the limits the novel’s ever-adaptable form, is an ‘unabashed triumph’.

Kaleidoscopic in theme and incandescent in tone, Evaristo’s panorama of modern black womanhood resounds with an astonishing diversity of voice and character as seen across a changing century. Tracking the lives and loves of a dozen British women through generations and social classes, Girl, Woman, Other weaves a distinctive, illuminating tapestry of modern British life. ‘This is a story for our times,’ comments the New Statesman. ‘If you want to understand modern day Britain, this is the writer to read.’

Framed against the aftermath of a catastrophic climate disaster known as ‘the Change’, Lanchester paints a deeply compelling picture of a divided nation, committed to defending its walls at all costs. The dark heir of his state-of-the-nation novel Capital, The Wall is a Middle England dystopia for our fractured and uncertain times. A thrillingly apposite allegory of Broken Britain that asks key questions about the choice between personal freedom and national interest.


The Man Who Saw Everything (Deborah Levy)

The Man Who Saw Everything is a bewitching novel of fractured time, memory and experience. Pin-wheeling through one man’s life, from late 1980’s Abbey Road to communist East Berlin and beyond, Levy’s deft, playful and sharply honed novel is a masterpiece of narrative invention. A book that asks bold questions about how our love, allegiance and comprehension might change – subtly, shatteringly - in the face of the merciless march of unfolding history. Previously shortlisted for the Man Booker Prize twice for Swimming Home and Hot Milk, will The Man Who Saw Everything prove the charm?


An Orchestra of Minorities (Chigozie Obioma)

Obioma’s reinterpretation of Igbo folklore intertwines with a vibrant updating of Homer’s Odyssey to create a myth-infused story of love and a life-plan gone awry. Delicate yet muscular, thoughtful yet dynamic, An Orchestra of Minorities churns with the wrench of heartache and the sacrifices we make for the ones we love. Previously shortlisted for the Man Booker Prize for his haunting novel The Fishermen, An Orchestra of Minorities delivers a welcome second nomination to an author with a striking ability to meld myth and lyrical storytelling with timelessly powerful themes.

A child, a family, a village; a community built on ancient soil, shelter to generations of lives and the tales they tell. For all time, Dead Papa Toothwort has forever walked amongst them all. Now, he is drawn again from his slumber, drawn to something new and precious. The boy. Lanny. The author of Grief is the Thing with Feathers takes flight once more with a paean to childhood, friendship and landscape that interrogates the very form of the book itself. A trailblazing work of sublime lyrical intensity, Lanny is a tour de force of style, substance and near-mythic power.

A rumbustious picaresque that dissects modern America with merciless relish, Quichotte tells the surreal, satirical story of a television-obsessed travelling salesman and his imaginary son. Framed as a riotous road trip across the United States, Rushdie’s latest masterpiece is a hilarious, poignant and bitingly intelligent take on the rebooted American Dream. A previous Man Booker Prize winner with his illusionary epic Midnight’s Children, securing the 2019 award would make Rushdie only the second author (after Hilary Mantel) to win twice in five decades.

A dazzling conceit handled sensitively by a master of world literature, journalist, activist and novelist Elf Shafak’s remarkable new novel traces the memories – by turns poignant, effervescent and tragic – of Tequila Leila in the ten minutes after she dies. Unearthing unexpected joy and illumination amidst the devastation of its premise, this is a novel that extracts the value of a passionate, fully lived life from its untimely ending. Sensuously written with Shafak’s customary tenderness and insight and fully evoking the atmosphere of contemporary Istanbul, 10 Minutes 38 Seconds in This Strange World is a profoundly moving triumph.

Form very much reflects subject matter in Jeanette Winterson’s astonishing new novel, as the celebrated author of Oranges are Not the Only Fruit splices together the iconic narrative of Frankenstein with a modern day dissection of AI, cryogenics and synthetic humanity. As any Winterson reader might expect, there’s plenty of wry, tongue-in-cheek, black humour to her lively and energetic reanimation of Mary Shelley’s man-made monster novel. The result is a magnificently macabre fable about body image and body horror that encompasses some of the most contentious and pertinent issues of the day.