After the infamous Starbucks cup incident the 'Game of Thrones' finale featured a visible water bottle on set during one of the final scenes.

a water bottle in King’s Landing!! #got #gameofthrones pic.twitter.com/mwGQlsLwnh

fromyourashes
May 20th, 2019, 07:57 pm
the only thing that could surprise me at this point in regards to this show would be
well
i mean
nothing

trendsnational
May 20th, 2019, 08:12 pm
And that cup was craft services and not Starbucks. Theyre getting free promo out of this.
(no subject) -

palosantos
May 20th, 2019, 07:59 pm
D&D directed this. How does no one go back to at least edit it out, especially after their last kerfuffle?

asterope
May 20th, 2019, 08:01 pm
i just went down a rabbit hole of reading about all the changes they made from the books and now i want to reread T___T i haven't read them since 2011 and i want to remember them bc they're great but......is it really worth it when he won't finish em
(no subject) - (Anonymous)

thebadunkadunk
May 20th, 2019, 10:14 pm
I only read the first book and it was wonderful but I read it on my kindle and did not realize there was a whole supplement explaining who everyone was and the history so I was pleasantly confused the whole time. It's my fault for not reading the table of contents tbh!

So in conclusion I think reading the first one is a good way to go because if you read all of them you'll be mad about how it hasn't been completed, like the worst kind of fanfiction to be invested in

sthlmsyndrom
May 20th, 2019, 10:31 pm
same, i read them all over the summer in 2012, and im always bad with names and deetails so ive forgotten a lot! i re-read them, maybe some of the other in-universe books and end it with the fic everyone says is good...

send this of with a sense of closure. like im not mad or upset, but im def underwhelmed and either i end it here or i do a send off

So basically they, like most viewers, quit giving any and all fucks this season.

stuffedpanda
May 20th, 2019, 08:03 pm
i liked the ending but it felt rushed af. dany needed at least 3 more episodes of going crazy

Me to Bronn everytime i remember he got Highgarden

allmylines
May 20th, 2019, 08:24 pm
MFTE i can't believe such a useless, shitty character got to take over the land rightfully held by my poor bb tyrells :( #rip #gonebutneverforgotten

I hope he gets stabbed and dies three days later in a bar fight.

valentineballad
May 20th, 2019, 08:04 pm
D&D could not have made it any more apparent that they didn’t give a fuck about doing this season right. It’s such a slap in the face to the fans. 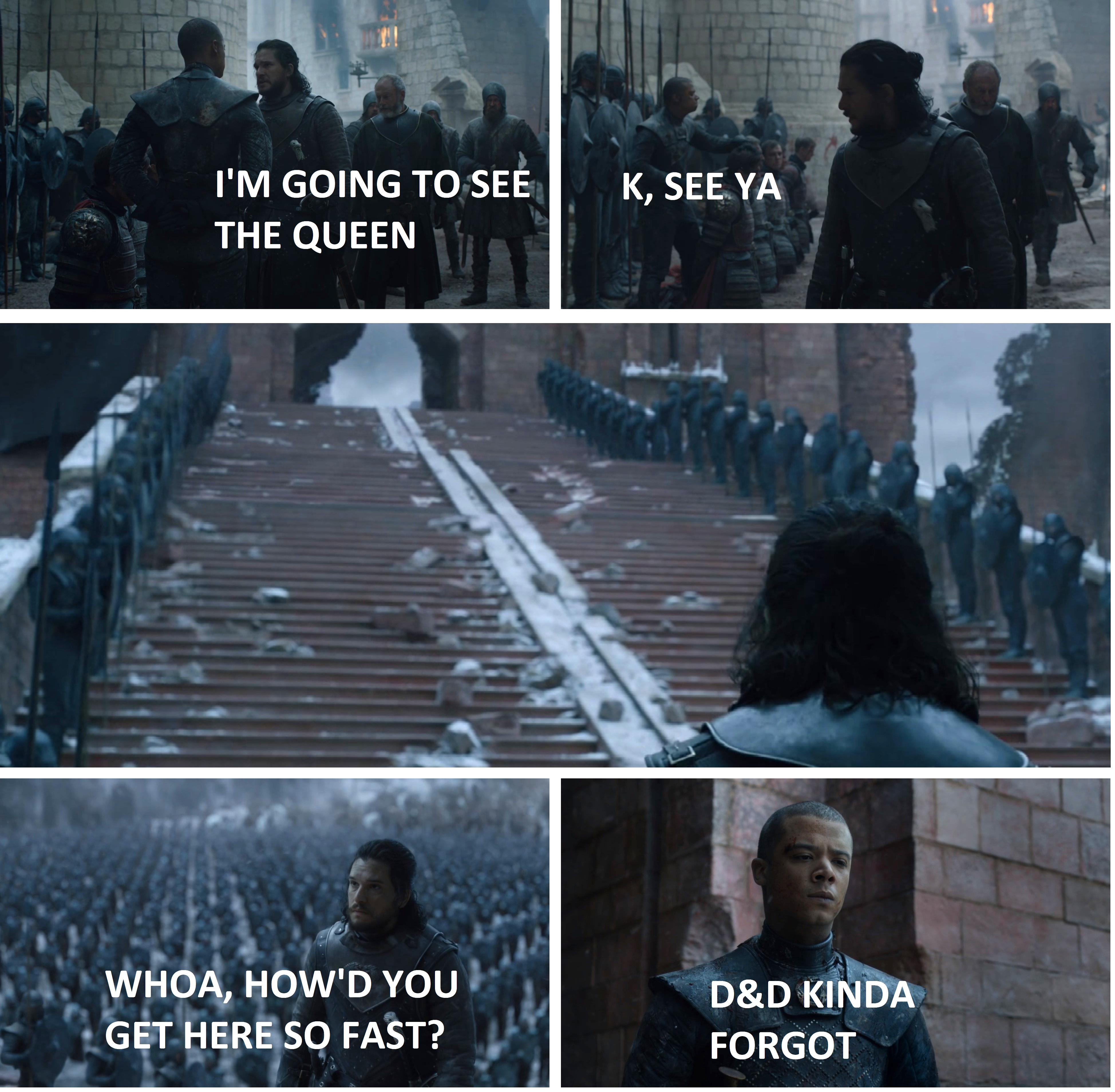 rhapsodeeinblue
May 20th, 2019, 08:15 pm
Teleporting around Westeros, what a throwback tbh!

brokencrystal7
May 20th, 2019, 09:17 pm
They just wanted a ~cool ending~ shot for that second to last episode. Nothing matters anymore, just cool shots.
(no subject) -

jellycar
May 20th, 2019, 10:07 pm
right I thought it would be Bran warging but nah, lmfao. Feel like they just skipped an entire episode

neev
May 20th, 2019, 09:45 pm
It was this exact moment that I was like "Oh, this will be VERY bad". I'd been tricked for a hot second because Tyrion digging Jaime and Cersei out of the rubble had briefly made me feel an emotion.

swissbeauty23
May 20th, 2019, 10:03 pm
she and Gendry should've gone off to adventure together. Gendry can't rule THE FUCK lmao

la_petite_singe
May 20th, 2019, 08:08 pm
lmao it kills me how much (some of) the actors care SO much and the special effects/stunt guys care SO much ... and then there's the writers and the script supervisor, apparently, who are fresh out of fucks to give and don't catch the most basic shit like coffee cups and water bottles and wait, how many Dothraki are there??? s m h