Paula announced this week that in addition to her Vegas residency she is also scheduled to take the stage at LA's Pride Festival, which she will be opening on June 7th with a free performance #generousQueen.

She said in a statement to ET: "I am so happy to be a part of this year's LA Pride Festival and to celebrate this year's theme, #JUSTUNITE". Throughout the course of my career, the LGBTQ+ community has stood behind me, and I'm honored to now have the opportunity to show my support and gratitude by performing at this year's Opening Ceremony. I'm hoping the night will be a chance for all generations of the community to come together to celebrate one another and the work that has been done."

People Magazine called her performance "show-stopping", while the Washington Post described it as "unbelievably mesmerizing" and choosing it as one of the show's highlights. Finally E! said that Paula showed that she's "a force to be reckoned with" and noted that the singer/dancer/choreographer proved her "icon status on the 2019 Billboard Music Awards stage".

After throwing her hat on Julianne's neck on Wednesday, Paula also shared this twitter moment with her lucky victim.

Straight up, let me tell you, my neck is fine! 😝 I was just caught in a hit and run by one of my idols! I love you @PaulaAbdul! 💋💕 Now bring that hat to @AGT and let’s have a dance off! pic.twitter.com/gUbXaGwGql 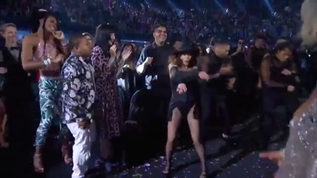