ONTD Original: So.... who won the Weekend? 'AVENGERS: ENDGAME' or 'GAME OF THRONES'?? 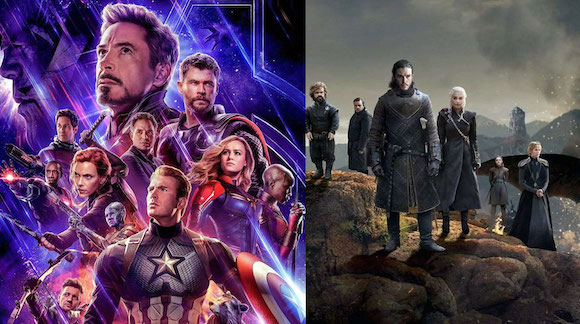 BIG SPOILERS FOR 'AVENGERS: ENDGAME' AND 'GAME OF THRONES'

ONTD, who do you think won the weekend? GOT or Endgame?
Tagged: game of thrones (hbo), marvel, spoilers, television - hbo, the avengers

messfortwo
May 2nd, 2019, 01:27 am
The "Assemble" should've been louder and angrier like a battle cry, it was like Cap was talking to himself, but other than that that final fight was epic, I need to see it again.

icedevil0289
May 2nd, 2019, 01:29 am
i liked that it was almost a whisper, like he was just done with everything and ready to fucking kill thanos

weighty_ghost
May 2nd, 2019, 01:37 am
avengers assemble is.. strange because like, they were already assembled?

messfortwo
May 2nd, 2019, 01:53 am
lmao yeah, Strange was the one that assembled the whole team, maybe Cap was just reassuring everyone?

youdontknowme
May 2nd, 2019, 04:01 pm
the entire line shouldn't have even happened lol it was weird and awkward

go3x
May 3rd, 2019, 02:01 am
Because it's the only way to make that word sound less cheesy. By making it look like he's in pain and gritting his teeth, it gave the line the urgency and tension it needed.

xfindyourlove
May 2nd, 2019, 01:28 am
GOT had me barely breathing for 90 mins. i was anxious as some parts of endgame but not nearly as much. overall GOT won for me just on pure emotion alone.

roxiful
May 3rd, 2019, 03:33 am
I've been slowly watching that titans show on netflix and my GOD Rachel is just the worst. Everyone is the worst. Does the show get better?? I'm only 4 episodes in but I'd be okay with that weirdo family killing everyone. That bird couple just bounced from the story lol. Sorry lol, your icon apparently unleashed my feelings on this subject.

xfindyourlove
May 3rd, 2019, 03:56 am
haha, yes it does get better! though it has its misses, definitely. i find rachel annoying as well. but i really enjoyed the season for the most part. apart from dawn (obviously) i love starfire and she makes the show for me.

I've been listening to King Ramin's Night King theme on constant replay for dayyysssss. Everything he does really is iconic!!

nomorefrostbite
May 2nd, 2019, 02:30 am
Same!! And I thought Light of the Seven would forever be recurring around my brain when I least expect it to. But when The Night King isn't playing on repeat (aka when i'm at work and have to actually not be playing music 24/7), it's still playing in my head on and on.

icedevil0289
May 2nd, 2019, 01:40 am
Frigga said it to Thor when he went back to Asgard right after they had their conversation and had to go back to the main timeline.

weighty_ghost
May 2nd, 2019, 01:39 am
it was very motherly... like if it was anyone else, sure i can understand people being pissed but mothers tell their children to eat vegetables and will do so until the end of time
(no subject) -

doverz
May 2nd, 2019, 01:41 am
Yeah, having trauma, mental illness, and alcoholism be the comedic element of movie is not funny at all.

pagliyab
May 2nd, 2019, 03:00 am
the whole fat thor thing wasnt funny at all tbh. i hated what they did to thor. i mean, i guess it makes sense in SOME way, but a lot of it just came across as fatphobic ~lets make him fat for the lulz~
(no subject) -

ibby
May 2nd, 2019, 04:47 am
Yeah because it was regressive fatphobia as a comedy shtick as usual, plus making a powerful character's extremely legitimate depression, grieving, alcoholism and overall trauma into a punchline.

saemcrh
May 2nd, 2019, 01:36 am
GOT for me. Endgame was a great end to a long journey, but I only really shed a tear because once again, crying Tom Holland/Spidey got to me lol. I liked it a lot, but I kind of felt overwhelmed for 3 hours, in a way that makes me feel as though I really didn’t take it in properly.

GOT was the opposite in that way, it was overwhelming but I felt every moment and took everything in as it came. I legit forgot to breathe at points because I was so immersed.

Also *controversial* on ONTD, but Jon is not useless at all. Obviously he has his moments of stupidity and poor choices, but he’s not useless.

weighty_ghost
May 2nd, 2019, 01:54 am
i was wondering what it would be since he seemed nervous in AOU that it moved, but then just YEEEEEEEEEEEESSSSSSSSSSS I KNEW IT

meganlynn09
May 2nd, 2019, 01:53 am
It was amazing. It also definitely got the loudest reaction from my audience, it really heightened the moment tbh

chibik3r0
May 2nd, 2019, 02:16 am
That whole scene where he just beat the shit out of Thanos. I want like...a framed landscaped poster of him with Mjolnir, lightning, give me everything. It was like the "Thor lands in Wakanda" scene for me this film
(no subject) -

gssilver
May 2nd, 2019, 03:12 am
I had such a responsive and loud audience but everyone went completely nuts over this. So deafeningly loud lol

ibby
May 2nd, 2019, 04:49 am
My only issue was the accompanying lightning when we just established in Ragnarok that mjolnir had nothing to do with the lightning, it was all Thor.
(no subject) -

megalixer
May 2nd, 2019, 01:43 am
I've been invested in GoT/ASoIaF since high school so this wasn't even a question for me. (I guess technically IM1 also came out when I was in high school lol but it was just "cool, the summer superhero movie that's not TDK" to me then whereas I've been dying to know how shit ends up in Westeros since 5eva!)

I had some issues w/ last week's ep - I wish more of the lore had been paid off, I'm concerned for where the show is heading next - but I cared the whole time. I'm not a super-invested Marvel fan so the whole fanservice-y ass second act of Endgame got longggggggg for me.

colonel_green
May 2nd, 2019, 01:43 am
Endgame wins for me. Surprisingly, it had more guts as far as narrative goes (not just in killing such an important character, but also in not undoing the time jump).

doverz
May 2nd, 2019, 01:43 am
I'm going to say GOT. I enjoyed Endgame, but there were too many things that happened that soured me to the movie.

I do wish i could have enjoyed the wielding of mjolnir more.

The women of MCU shot was definitely pandering especially after they just killed Black Widow but I still enjoyed watching it, also love how they were protective of peter. I mean it doesn't make any sense for them to leave what they were previously doing and congregate in that one spot, but i still enjoyed it.

Then again GOT didn’t leave me feeling depressed for days like Endgame did so....

But in the end Marvel does have one thing that can never be second place in my mind....Cap’s ass.