Riverdale Roundup: Guess Who's Back for Season Finale, KJ Joins Faith Based Film, and More

KJ joins Lionsgate's "I Still Believe" along with Gary Sinise. It's a sequel to the "hit" film I Can Only Imagine.

Apa is set to play Jeremy Camp, a real-life Christian musician. Gary Sinise will play his dad, Tom Camp. The film will start shooting this spring (so basically once Apa is finished filming Riverdale), and Lionsgate is planning on a March 20, 2020 release date.

This is the song the film is named after.


---
As the end of production draws near, filming in the woods continues with both night and day shoots

serpents and pretty poisons uniting to take down the farm? pic.twitter.com/mhwS6IirVV

---
Hart posted about being back in Vancouver which considering that he mentioned how he was receiving scripts for this season could signal a return of Chic in the season finale. 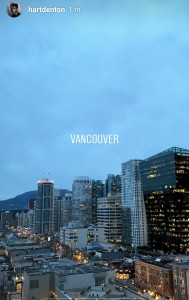 Also, Britt Morgan who plays Penny recently posted about being back in Vancouver

Lochlyn is also on the set thanks to KJ's IG stories