This morning, Kim, who has been an advocate for gun control, praised the government’s swift response to the tragedy.

A teen cracks an egg over Australian lawmaker Fraser Anning's head over anti-immigration remarks he made hours after the New Zealand mosque attacks. https://t.co/3aKgHn5ACk pic.twitter.com/dUDiemY3ul

A teen egged a far-right Australian lawmaker for his comments over the New Zealand attacks. The lawmaker then punched the teen in the face.

croakvegas
March 16th, 2019, 10:52 pm
I know that internet culture and memes etc were a part of the problem behind the attack in Christchurch but I've been loving the eggboy memes all day tbh 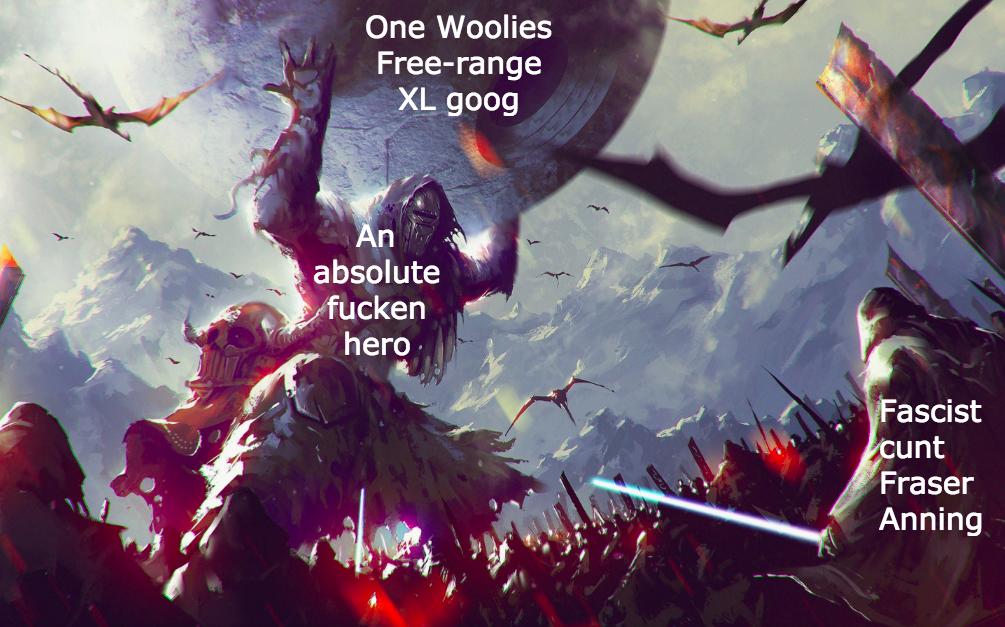 I also particularly enjoyed the video of the guy chasing Anning through the airport, calling him a 'shitcunt' lmao

Anning caught in the airport without his fash backup.

This is even better than egg boy. pic.twitter.com/YN53F9oS7G

stewie_e
March 17th, 2019, 12:44 am
Fuck I needed this. It’s so satisfying I’m not sorry. I hope he’s made uncomfortable like this everyday of his pathetic life and I hope he loses his seat. But I’m not holding my breath on that.

he's mainly saying variants of 'don't you have any fucking remorse for the families' and 'you're a senator of Australia, look how you act' and 'do something, you're representing Australia' (along with the classic 'you're a shitcunt' insult to finish)

justbolognese
March 17th, 2019, 03:52 am
I love this. The way he's pronouncing "remorse" is cracking me up too. I hope this guy never has a second peace

trancexperiment
March 17th, 2019, 08:02 am
Good. I hope this fucker continues to get harassed into resigning.

magnetic_rose92
March 16th, 2019, 10:58 pm
Good on Egg Boy, but the way that politician just immediately started going at it with him, a CHILD, is really disturbing. Wtf.
(no subject) -

dnttllhrry
March 16th, 2019, 11:08 pm
This story has nothing to do with Kim.
For one thing, the US has legalized bribery to keep these horrible laws afloat.
Passing a law to keep money out of politics should be the first step to get anything done in this corrupt ass country.

WHEN DID YOU HAVE THE TIME TO WRITE A FUCKING FANFIC?!

onceupon_awish
March 17th, 2019, 12:09 am
Wow, punching and standing on a kid for an egging... and the left wants us to think that old white men aren’t perfectly reasonable! /sarcasm*

Fuck that ego bruised “senator” and the men that tackled a damn teen over an egg. They really thought they did something other than look like the complete garbage that they are.

spellmanian
March 17th, 2019, 05:53 pm
They were just protecting the senator's safety! Eggings can be fatal!

nicholasdee
March 17th, 2019, 03:20 am
Lol when I read the description I imagined him chucking the egg from a distance but man he really just smashed that thing

I hope Fraser Anning is just egged wherever he goes for the rest of his life.

spellmanian
March 17th, 2019, 05:52 pm
Who the fuck's first reaction to being EGGED is to physically attack the small boy (I mean, really, he's quite tiny comparatively) who did it? The unwarranted aggression is fucking terrifying and bizarre. No one like that should have any political power. Especially someone who would condone adult men putting a teenager in a choke-hold.