Carter – whose brother Nick Carter is also an accused rapist - tweeted a list from the internet on the inconsistencies in Robson's allegations against Jackson.

If it's not an adult acting innapropriately with a teenager...

illyrias_pet
March 12th, 2019, 01:41 am
Also I went to the source and they posted this screenshot of the tweet 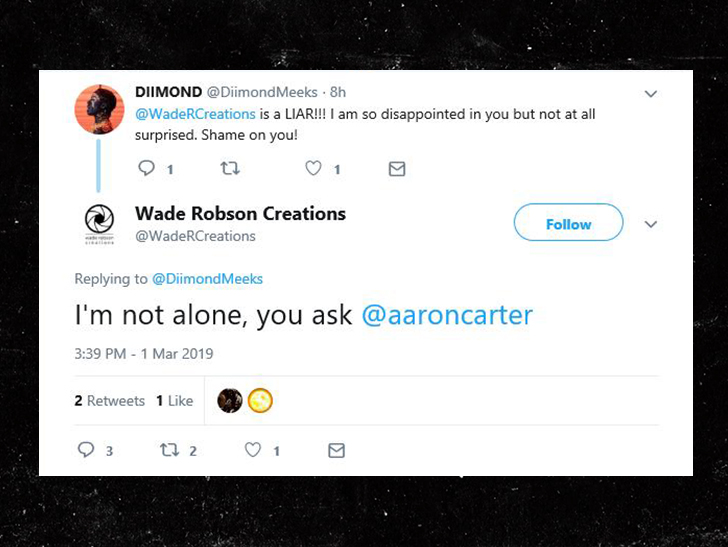 But isn't that a fake twitter account. It's gone now but from google it seems like it was created February 2019 and is fake? Wade only has a website and instagram where he has comments turned off and doesn't reply to anything I think.

illyrias_pet
March 12th, 2019, 01:46 am
When searching that account on twitter I found Chely Wright and Richard Marx responses to the documentary huh

Sadly, none of it surprises me. @michaeljackson was a sick, broken & manipulative man.

This documentary is difficult to watch, but I must; we all must.

Our society enabled this. @HBO

Hey Chris. You seem quite disturbed. But regardless of your mental issues, you owe the lady an apology for a completely unwarranted and unprovoked bigoted personal attack. Be much less of an asshole immediately.

One thing I can be absolutely definitive about after watching #LeavingNeverland is profound gratitude that the parents of these boys weren’t mine.

MJfamily. There has been a lot of discussion recently about whether WadeRCreations is Wades account. It's not. It's fake.The account has Italian listed as the language setting. From the tweets l saw before they locked, l believe it's a female behind it. Please ignore the account. pic.twitter.com/njTRyKw1vl

Thanks I saw the TMZ update saying his lawyer confirmed it's fake. I also found this tweet from a MJ stan saying the account is fake and made by someone from Italy. It's embarrassing that Aaron Carter is going to TMZ about a fake account and saying he's from the South and will punch Wade for @ing him on twitter and spitting on the grave of an icon/legend. The video was so gross he called James "whatever the name of the other guy is" and said how am I supposed to believe all those gross things Wade said when my own relationship was sweet, loving, gentle, and I slept in the same bedroom as Michael when I was 15

helyanwe89
March 12th, 2019, 01:42 am
ONTD is the only place I ever see anything about Aaron Carter. I don't think he's been remotely relevant in years (I do remember when Disney showed his music videos, but that was many years ago and he hasn't really done anything of note since).

longlonglong12
March 12th, 2019, 01:53 am
I'm watching the doc now and at the point where they show all the people disbelieving and saying awful things about Wade and fuck them all ugh

intangibleamor
March 12th, 2019, 02:11 am
He’s one of those assholes who thinks because he wasn’t abused then the neighbor who is accused of abusing other kids is innocent because they weren’t touched.

Such a dumb ass.

cocoforcourtney
March 12th, 2019, 02:57 am
I just watched the whole thing yesterday, including the the after show, and I cannot stop thinking about it. The people questioning Wade and James are infuriating and so sad to me. Just watch it and you'd have no doubt. It's unbelievable that this went on for so long, the people that didn't pay attention to what was so clearly going on. It breaks my heart. I am sending such positive vibes to Wade and James.

WADE ROBSON DONT DRAG MY NAME INTO SHIT!!! YOU DONT WANT THIS 💨 KEEP MY NAME OUT OF YOUR MOUTH YOU STARTED THIS SHIT

ladycyndra
March 12th, 2019, 04:24 am
Of course he reacts with violence. Didn't Nick smack him around a lot? Both are utter trash and FUCK bsb