smoke some weed n think about the bigger picture. chillax my dudes

yeah they do that to everyone with a good heart and tries to make a dfference but do you really think that it’s possible to tear his name down ? like do you truly believe they stand a chance ? relax and have peace.

Paris Jackson, Michael Jackson's daughter, says that everyone should "chillax and some some weed" because there is no chance her dad's name and legacy will be torn down.

Pierce Morgan a real one for this. Let this man speak for himself to defend his legacy. Don’t just listen to one side and expect to find truth. Oh that’s right...Dead men can’t speak. So what was the point again? Destroy another strong black historical LEGEND?!?! It’s several examples of pedophilia in American History... if y’all pulling up all our old shit... we gotta examine ELVIS PRESLEY, HUGH HEPHNER,and a whole slew of others guilty of the same if not more!!! BUT WHY US all the time? There’s an agenda to destroy OUR CULTURE. #KingsThoughts

These are assaults against OUR CULTURE!!! Make no mistake of it!!!

T.I. said praised Piers Morgan for defending Michael Jackson and said that the documentary is an attack on black culture. 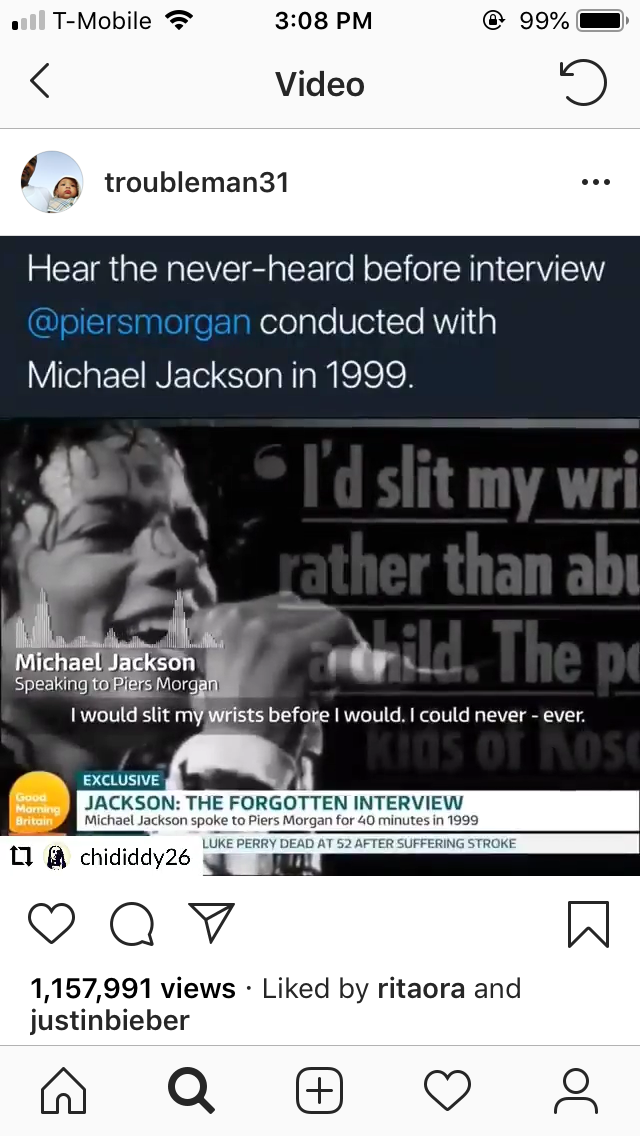 We know that love survives. These lies will not. ❤️ #MichaelJackson #MJ UPDATE: to those who are soon to no longer be among my follower count, feel free to unfollow with my blessing. Miss me with your goodbyes. Just get hat and be on your way. If you choose to be rowdy on your way out, my block will bless you as you go. YOUR page is for your opinions and long-winded debates about Michael. My comment section is not. #ISaidWhatISaid #AndIDidntStutter

A post shared by Yvette Nicole Brown (@yvettenicolebrown) on

Yvette Nicole Brown said that all the allegations against Michael Jackson are lies and she will block anyone who disagrees in the comments. 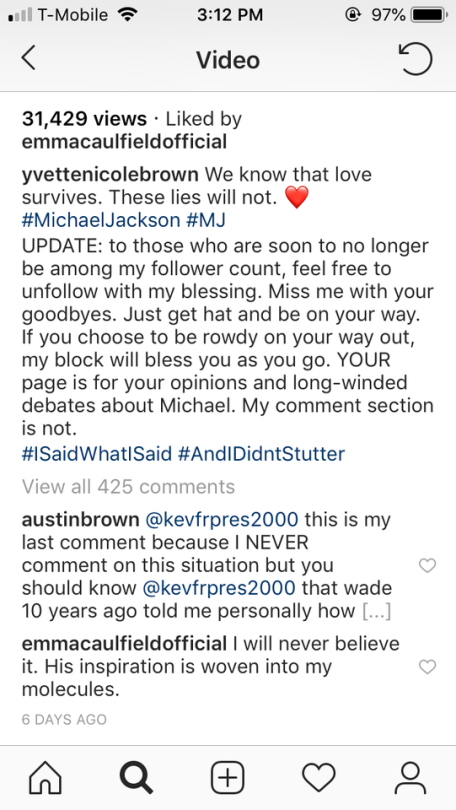 Emma Caulfield said in the comments of Yvette Nicole Brown's post that she will never believe the allegations because Michael Jackson's "inspiriation is woven into her molecules."

My 2 cents on #waderobson what I’m saying is truth @oprah you wanting to get the truth in #MichaelJackson I understand as a journalist and a reporter the responsibility to try to get both sides.. so I’m not upset at oprah what I am very incredibly disappointed with is the fact that this guy (wade) after being told he could not choreograph the Vegas show by the Jackson estate decided to go and create produce and create this garbage and now the world is watching #Facts As a world renowned choreographer Myself I was privy to tours , dancers , convos. And much more .. This guy did heavy drugs . I took wade on the Britney tour . He was acting up with her .. I put him in the #youdrivemecrazy video .. This well produced lie has stirred up questions that should have no space in heads ,there are things this man has done and clearly is still doing that has and shows a very low moral compass he has done things with other stars which I will not name and gotten involved in their personal lives did underhanded things behind their back‘s ..other notable names that trusted him ..huge mega stars this guy has gone behind their back‘s and has done things that were disloyal and underhanded and again as you see in this video I saw him on a dance floor tongue kissing his sister shantel what kind of behavior is that .. I was disgusted. And appalled and knew this guy had no morality . #facts #truth #morality #garbage #producedjunk #lies #oprah #choreographer #darrinhenson #byebyebye btw for the nay sayers I don’t need anything from anyone .. these are facts there is so much you guys don’t know living ,working ,and being in other parts of the world and country 💯This is my only IG account !!!! Others are fake 👎🏾

A post shared by Darrin D Henson🦅 (@iamdarrindhenson) on

Darrin D Henson, a choreographer who personally knows Wade and put him in Britney Spears "You Drive Me Crazy" video, trashed Wade and said he is a liar who does drugs and backstabs mega stars.

What are you ‘sayin’, Dan? https://t.co/WA7BQqghkq

Piers Morgan is arguing with the director of the documentary on twitter. Piers has also said that the victims are lying and out for money.

Plse read whole thing( to the end) and tell me your thoughts. https://t.co/2i2MtKxqIu

Peter Andre was actually in the same dance competition as 5 year-old Wade Robson when he was 11. He came in 2nd place to Wade who was actually too young to compete. The prize for winning was meeting Michael Jackson. He says he's still devastated that he didn't get to meet Michael Jackson, while Wade did. He says that he watched the first 15 minutes of the documentary, but couldn't continue. He will continue performing Michael Jackson and Jackson 5 tributes on his tour. He says if the documentary is true, we can't ignore the voice of any victims. He says imagine if it's true and how the victims feel if they don't believe them. But then he goes on to do exactly what he said is "beyond terrible." He says, if it's not true we have to look at how the documentary is hurting Michael's family and legacy. He says he knows Tito very well and is also devastated for Michael's mother who is in a wheelchair and has to go through this over and over again. He says that Michael's music should only be taken off the radio, if there's solid proof the allegations are true, but for now it shouldn't be because it will hurt the other songwriters who wrote songs Michael sung and we should trust the justice system that acquitted Michael of all charges in 2005.

Joey Fatone was on The Talk and said that the documentary was very hard to watch. He doesn't know if it's 100% true or 100% false or a mixture. He says personally he doesn't remember anything from he was 7, but then it was something traumatic for Wade, so he remembers, but Wade also said it wasn't traumatic for him then, so he doesn't know. And when NSYNC performed with Michael Jackson, Wade choreographed it and he never seemed scared or timid of Michael and seemed excited about him and was always praising him. But he doesn't know and says he loves Wade to death and hopes that he can heal and move on.


Carrie Ann Inaba was also on The Talk and teared up and said she was so touched by Wade's bravery and that she has known him since he was a young boy and taking dance classes. She says she's currently angry at Michael Jackson, but she doesn't think it will affect his musical legacy. And for her she can separate the art from the artist and she will always associate it with happy memories in her life even though she's currently angry at him. Sharon Osbourne commented that it must crush boys that every 12 months they are the favorite and then it ends and someone else replaces them.

“Just because you read it in a magazine or see it on the TV screen, don’t make it factual...” (Lyrics:Tabloid Junkie) #michaeljackson #mjinnocent #mjfam

I'm in awe of the bravery it took for these two men to come forward and speak their truth in #LeavingNeverland. Breaks my heart that people are accusing them of lying - so ignorant & shameful. & unless you've watched the entire documentary - you are in no place to comment on it.

Zero desire to get into a twitter feud with anyone.. just want to say, put the fact that it’s MJ aside... Please find a grown man who’s not a pedophile that sleeps in beds with little boys 🤷🏻‍♀️

Carly Chaikin believes the victims and says those who accuse them of lying are ignorant and shameful.

The Corey Feldman defense that MJ must not have done it because he didn’t do it to me doesn’t quite work. That’s like saying Ted Bundy wasn’t a murderer because I met him at a bar and he didn’t murder me. https://t.co/S2L2waCAIL

Judd Apatow said that Corey Feldman's defense that MJ didn't abuse others, since he didn't abuse Corey is flawed. Corey has now changed his tune and says he can't defend Michael any longer.

#LeavingNeverland should be required watching for parents to recognize seduction and grooming.@danreed1000 Thank you Wade Robson and James Safechuck for your bravery and dignity. @Oprah interview👏🏼

The @HBO doc #leavingneverland is one of the most devastating things I’ve ever watched. To see the lifelong trauma and destruction the abuse by Michael Jackson had on these men is hard to imagine, much less watch. I’m wondering if any of you watched & what your thoughts are. pic.twitter.com/61PPuFHTXP