Our incredible CEO and cofounder @KristinaSaffran co-wrote an open letter about body neutrality with @CamilaMendes and Amanda Crew — please give it a read and share.https://t.co/fSU547lKVX

[Body neutrality is the idea that our worth is not tied to how we look. We may seem to be unlikely messengers of the body neutrality message, as three conventionally attractive, smaller bodied women. However, this issue is not just important for women in larger bodies, but for all women, because nobody can measure up to our societal beauty ideal — it’s unattainable]It’s a good time to be a woman in America. We’ve outpaced our male counterparts in graduating from college, the #MeToo movement is demanding an end to harassment and violence, we’re running for office in record numbers, and we’re beginning to demand equal partnerships at home as well. The women’s empowerment movement is in full swing, and women are finally demanding full equality.

But we will never have full equality until we tackle the unhealthy societal expectations placed on women’s appearance.
From a very young age, girls are brought up to believe that our most important attribute is our appearance. We spend an unseemly amount of time, money and mental energy on making ourselves "beautiful." Women are estimated to spend a quarter million dollars on vanity products over the course of a lifetime, and an average of 40 minutes getting ready each morning, three times more than their male counterparts.

We invest the most time, money, and mental energy on the "perfect body." According to a 2013 study, 91% of American women are dissatisfied with their bodies. Other surveys suggest that 67% of women are trying to lose weight. And it starts young: 40-60% of elementary school girls (ages 6-12) are concerned about their weight or about becoming too fat.
We have a beauty standard in this country that is unattainable for the vast majority of women. According to statistics from 2012, an estimated 67% of American women are plus-size, defined as a size 14 or larger. Further, almost all the ads we see are also photoshopped, meaning that we are literally comparing ourselves to something that is impossible to achieve.

To add insult to injury, we’ve been told that weight loss is critical to health, and diets will help us get there, but there’s strong evidence that that’s just not true. Weight is a poor proxy for health, and long-term studies show that the majority of individuals on diets end up weighing more than when they began.

Instead of questioning the system, we blame ourselves. Our bad feelings about our appearance overshadow our good feelings about other attributes. We continue to pour time and resources into “fixing” our appearance, rather than cultivating our meaningful qualities. And when you’re not comfortable in your own skin, you don’t value yourself. On a subconscious level, you don’t think you’re worthy of the dream job, a loving and equal partnership, being treated with full respect.

Body neutrality is the idea that our worth is not tied to how we look. We may seem to be unlikely messengers of the body neutrality message, as three conventionally attractive, smaller bodied women. However, this issue is not just important for women in larger bodies, but for all women, because nobody can measure up to our societal beauty ideal — it’s unattainable. But 30 million Americans of all races, ethnicities, socioeconomic statuses, ages, genders and body shapes and sizes almost kill themselves trying. Body dissatisfaction is the most important predictor of developing an eating disorder, which is the second deadliest of all mental illnesses. And trust us, recovery can feel pretty impossible in this society that puts such an emphasis on women’s appearance.

What got us to full recovery was not accepting that we were "close enough" to the beauty ideal, but really discarding the notion that appearance was an important part of who we are. We are intelligent, we are ambitious, we are changemakers. These are the qualities that we work to cultivate, and where we derive true self-worth.
Only when women’s appearance and body size don’t hold such outsize importance in our society will we be truly be equal. We need to be teaching young girls and women to spend time investing in the things that matter. Being smart, being creative, being curious, being kind. Unlike appearance, these are the things that build true and lasting self-worth. And there is nothing more powerful than a woman who values

A few of the cast attended the premiere of Cole's movie including Lili, Skeet, Hart, Hayley, and Casey. Dylan Sprouse was also there

no offence but I’d risk it all for @CaseyCott #FiveFeetApart pic.twitter.com/KqicF1nxkp

A few weeks ago CMM posted about being on set as Edgar, and if that's really his outfit then dude just looks like a hipster rancher

KJ Apa’s first post since Luke Perry’s death is Third Eye Blind’s The Background so no, I’m not okay. pic.twitter.com/DqRzTQGoYZ

Still in absolute disbelief, you are so deeply missed Luke. 💔 I feel so lucky to have known you. pic.twitter.com/n1y4v6c4XW 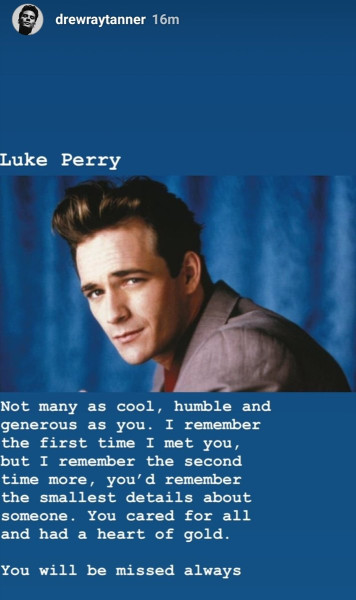 You lit up those around you and because of you the world is a brighter place. Thank you Luke. From the bottom of my heart, thank you.

When you wake up and the world seems unreal