6 Rings? Songwriter Kaydence Exposes Ariana For Not Crediting Her On New Album

Following the release of Thank U, Next, songwriter Kaydence who has written for Ariana on Sweetener and was one of the people behind her no.1 hits 7 Rings & Thank U, Next posted on her IG story claiming she was not credited for some songs (NASA, Makeup) on the album. 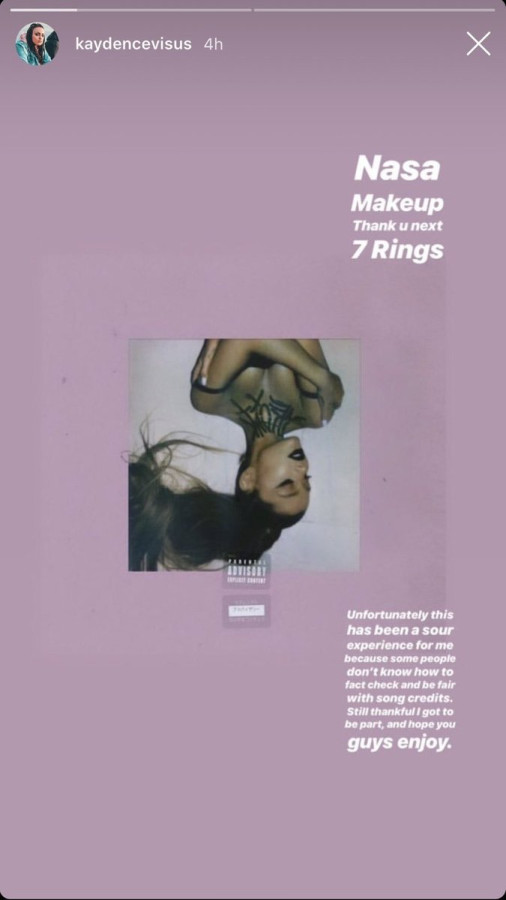 When fans got wind of her accusations, she was bombarded with insults which prompted her to delete the post.

Ariana and songwriters Tayla Parx and Victoria Monet chimed in to debunk her claims.

Damn should we credit Toulouse and Myron too @TAYLAPARX? They were also in the room 🤷🏽‍♀️

You’re looking at some of the nicest, most honest and fair people in this music industry. So nice it’s to our detriment sometimes NO cap. Ask around. With that said, be wise about what you reading from folks out here. They bucking

The entire process of creating this album was incredible & when it came down to business things were handled more than fair. So much in fact that we gave credit to people who didn’t even write the songs ..instead of being a sour grape you should’ve said thank u.... next.

thank u for your brilliant creative mind but also your strong and professional business side. i’ve learned so much from you. promise next time u sleep over strauss will sleep at my moms.

i wouldn’t have made this celebratory bop or feel ‘okay’ these days w/o my brilliant, gentle and funny friends who get me drunk, write songs w me & help me heal. i am tremendously grateful for u. 🖤 pls support them in their art: @TAYLAPARX @VictoriaMonet @NJOMZA @Kaydenceis 💍🌫