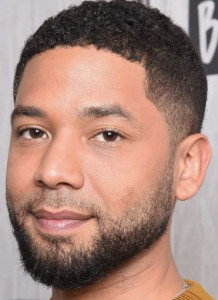 * Empire creator Lee Daniels tweeted - and then deleted - a photo of Smollett Facetiming with him while he was still in the hospital that showed Smollett with a cut under his eye.

* Chicago police say that Smollett still had the rope around his neck when he arrived at the hospital. It is being tested for evidence.

* The police got security footage from a camera outside a local Target store but it apparently doesn't show the attackers.

* Daily Beast writer Robby Soave wrote earlier today that Chicago PD officials had told him that Smollett never identified his attackers as white and that he never mentioned them saying "MAGA country". Soave's story was immediately picked up by every right-wing blog and news site out there - and triumphantly re-tweeted by thousands of Trump supporters - but ABC and TMZ both said Soave was wrong and he has now retracted his article, saying that the Chicago PD has given conflicting accounts.

I've updated this story: Police have now given me two statements regarding whether Jussie Smollet recalled hearing "MAGA." These statements are in conflict, more recent statement claims he did report this. https://t.co/2SRudifVpM


* Rev. Al Sharpton is calling on President Trump to publicly denounce the attack.

* All Empire cast members will be given armed security for the rest of the season, which wraps filming in a few weeks.