Patton Oswalt Helps Trump Supporter Who Trolled Him on Twitter 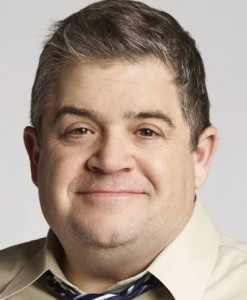 Agents of S.H.I.E.L.D. actor Patton Oswalt came to the aid of an ailing Trump supporter who trolled him on twitter on Thursday, and he has been garnering both praise and criticism for it. It all started when Oswalt replied to President Trump's tweet about the border wall:

You like pomes? I like pomes too! Here’s a pome I wroted:
ROSES ARE RED
TOMMY SHAW WAS IN STYX
YOU’RE GOING TO RESIGN
EAT A BUCKET OF DICKS https://t.co/PtfkFoUlIk

I just realized why I was so happy you died in Blade Trinity!

Oswalt at first laughed off the criticism:

Dude, I already know: ‘cuz “...one more second of you on screen and my heart would belong to Patton Oswalt.” I get told this at least twice a week by Trump supporters. It always makes me smile and I’m grateful and blessed. https://t.co/nrivTIf6u7

Aw, man. This dude just attacked me on Twitter and I joked back but then I looked at his timeline and he’s in a LOT of trouble health-wise. I’d be pissed off too. He’s been dealt some shitty cards — let’s deal him some good ones. Click and donate — just like I’m about to. https://t.co/6zRdZ430WG

Whew! Is your cousin the one who had sepsis or was it you? Either way I’m glad the $$$ goal was met. And PLEASE understand that people like @AOC are battling so you DON’T have to depend on GoFundMe to live with dignity and vigor. (And I’m working on getting to Alabama...) https://t.co/KlphvXn1gE

See, THIS is why compassion and forgiveness are the best — wait, you CRIED?!? You fuckin’ pussy! Donation CANCELLED. https://t.co/NkgNb6tmG5

Not everyone agreed that Beatty deserved the help, but Oswalt maintained that it was the right thing to do:

I know, but that’s how Trump and the GOP fuck with their own supporters. Let’s un-fuck what’s been fucked. https://t.co/gjm4JAz24u

Because the cynical will always exploit the idealistic. Karl Rove used to mock evangelicals behind their backs ‘cuz he just wanted their votes. So we have to snuff out cynicism with ACTION. I’m also guilty of cynicism but I’m trying. It’s a hard way but it’s doable. https://t.co/hb1egD5R0f

Oswalt had a recommendation for Beatty, as well:

What a great way to end the day. If you want to pay this forward, maybe find a GoFundMe for a furloughed government worker who’s feeling the pinch? Or make a big-ass haul o’ goodies to your local food bank? Something? Anything? https://t.co/FSEowiBuyn

What say you, ONTD - did Oswalt do the right thing here or not?