Some photos of KJ and Cole's vacation time in New Zealand. Featuring shirtlessnes, wetness, and rugby

RAS is catching up on posting script covers again! Only significant because we're getting a string of gimmicky episodes as well as the insulting notion that an episode focused on the supporting cast is "bizarre"

Getting caught up with my #Riverdale covers! Here’s the one for Episode 10! And yes, you will see high school students doing actual high school stuff...like cramming for the SATs! 👨🏻‍💻🌪🍿🏆🎲🎰 pic.twitter.com/HVObvadOub

SAT PREP – With SAT’s around the corner, Falice urge Bughead to stop investigating G&G and start focusing on their SAT prep. However, when Alice takes things one step too far, Betty is forced to visit her dad. Finally, Jughead makes a bold move against the Gargoyle Gang.

No Archie, Josie, Cheryl, or Toni.

Directed by Maggie Kiley and written by Brian E. Paterson

3x11 will be the more noir episode, titled The Red Dahlia

3x12 is the episode where the core four hopefully fuck off out of the spotlight. But Archie and Josie might also be hooking up this episode based on filming. Also, a gay makeout.

In #Riverdale 313, Archie steps back into the ring, Alice goes deeper with the Farm, Jughead visits the Heart of Darkness, and Veronica juggles dueling villains...💥🧨🚿⛓🔥🥽🥊😍💣☠️ pic.twitter.com/RKFlWM9GCv

Skeet posted the following picture on his IG stories without seeming to realize that a call sheet, which flat out says not to post on any social networks, was right there. 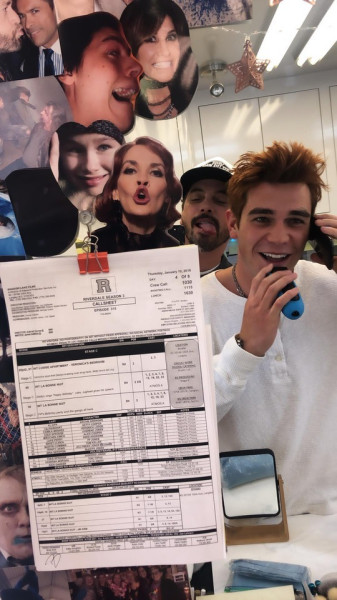 The listed scenes for episode 3x15 are:

-A scene in Veronica's bedroom (lol that she's back with her parents) where she says that Gladys is taking over the drug trade, and Betty has to tell Jughead about this new development.

-FP's birthday party at Veronica's speakeasy where Gladys sings “Happy Birthday,” a cake is served, Jughead gives a speech, and the gang's all there

Another thing people have observed is that former members of the Gargoyle Gang (a gang dedicated to serving the Gargoyle King and which Joaquin was a member of before being unceremoniously murdered) have been converted into being Serpents.

Dilton Doiley's bunker, which his classmates eagerly turned into a fuck nook with practically no reflection or sadness about his passing, may be seeing two new occupants as Gina posted a new picture from that set along with Jellybean's actress

---
Vanessa posted in her IG stories from a recording booth and while she could just be doing ADR, it's most likely for the musical. Unlike Skeet, Vanessa knows to cover things up, but fans are still trying to figure out what she could be singing as RAS has yet to announce what musical they'll be failing to lipsynch to. 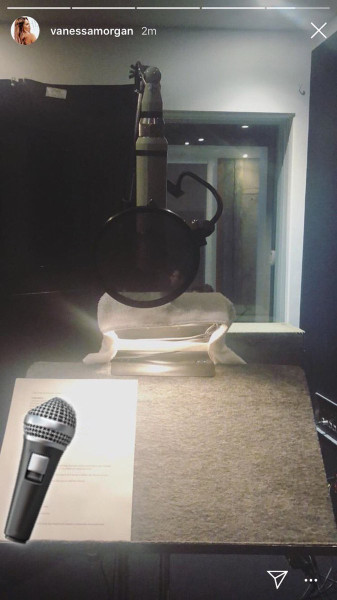 Did you want to know more about Choni's roadtrip of love? Well their road trip will be the focus of an issue of the Riverdale tie-in comic

RAS is working on it so it'll be more canon than other issues. OP wishes they'd gotten a different artist