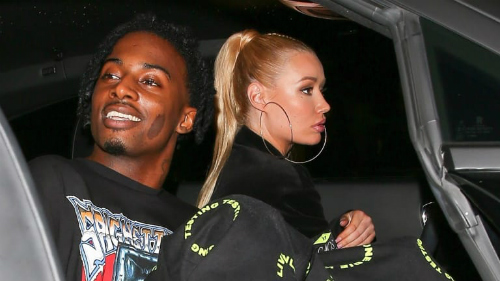 Iggy's new year is off to a shaky start.

Getting into the holiday spirit, Iggy Azalea (28) dropped $250,000 on a brand new Lamborghini as a Christmas gift for her boyfriend of 6 months - Playboi Carti. Playboi Carti, famously known for his hit single Magnolia, is a 22 year old rapper signed to A$AP Mob's AWGE Label.

(For those of you who don't know - A$AP Mob is a NY Hip-Hop collective that gained mainstream recognition following the meteoric success of member A$AP Rocky. A$AP Rocky has been cited as Carti's greatest musical influence and the two have remained very close industry friends. A$AP Rocky and Iggy Azalea dated back in 2011 and soon broke up a year later following cheating accusations however, not soon enough for her to get a tattoo to honor their relationship.)

On December 31, 2018, Iggy and Carti both flaunted photographs and videos on their IG stories of the black whip and it's clear below that Carti could barely hide his excitement.

Iggy Azaelia bought Playboi Carti a Lamborghini!!! WHAT DID U GET FOR XMAS??? 🏀 pic.twitter.com/NvpgSWaVTE

I’m a wraith girl myself... bought one earlier this year to match my range... what you drive babe? https://t.co/yaLcDxReXz

Everything seemed to be looking up for the two love birds so it came as a surprise that a few days following their public display of affection, the Playboi reportedly called it quits on their relationship. Fans noticed that Iggy wiped her Instagram page clean of any photographs of their relationship and Playboi Carti unfollowed her on the same social media platform.

Rapper Playboi Carti on If He Broke Up With Iggy Azalea After She Bought Him a $250k Lambo For Christmas & If He Plans on Keeping The Car; Twitter Reacts (IG-Pics-Vids) https://t.co/sSRo28mfwV pic.twitter.com/0qyhAUnMdt

As of now, it appears Carti has no plans on returning the Lamborghini.