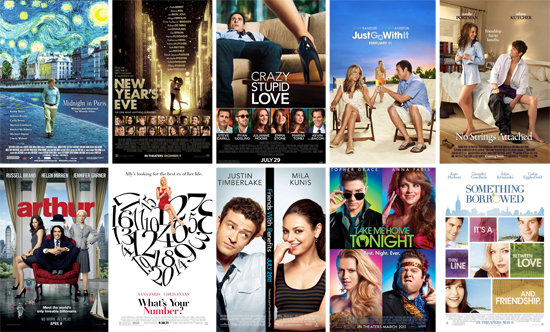 All this talk about the new Rebel WIlson movie only made me want to watch more romantic comedies, but I've already watched a lot of them, so it's hard to find new recommendations. I wanted to make a post where we can talk about our favorite romcoms, favorite scenes from romcoms etc. These are some of my favorites, in no particular order:

I love this movie. No matter what this place says about Ryan Reynolds, he's a good comedic actor and he and Sandra Bullock had great chemistry. My favorite scenes were the naked scene, and the scene where Sandra and Betty White dance in the woods.

Clueless
Clueless is a classic. This is the year of Clueless since everyone and their mother is wearing the same clothes that we've seen in the movie. Also Paul Rudd. This is my favorite scene from the movie:

10 Things I Hate About You
Not so typical 'good girl falling for a bad boy' story. It's been a few years since I've last watched it, but I remember thinking it was really fun. There was also a tv show based on it, which was cancelled, but I enjoyed it while it lasted (It had that mess Chris Zylka in it, and Ethan Peck who was super hot).

A movie with Will Smith being Will Smith and a super hot Eva Mendes. They had great chemistry, I rewatch this movie every chance I get. (when i tried finding gifs to add to the post from Hitch tag, it kept showing me gifs from Harry Styles' shows, what the fuck)

This movie is hilarious. I miss 'not a serious actor' Matthew McConaughey, he was great at comedy, he should go back to that. Kate Hudson is one of the queens of romcoms, I don't think i've watched a romcom where she was the lead that I didn't like. Then again, she shines even when the script is shit so maybe I was biased lmao.

Julia Roberts and Richard Gere, the golden romcom couple. This and Pretty Woman are one of my favorite movies. That speech that Julia makes to Richard in Runaway Bride gives me all the feels. LOOK AT THEM!!!!

27 Dresses
Katherine Heigl should really have her own genre of movies. She plays herself in every movie but somehow it works, she's just so likeable! I loved the drunken scene from this movie, with her and James Marsden, i thought the end with all the bridesmaids wearing her dresses was so cute.

The Ugly Truth
Katherine Heigl again. She and Gerard Butler had great chemistry in this movie. Gerard played a sexist pig that Katherine Heigl taught how to love lmao (don't think about it too much, just enjoy two hot people fucking lool).

To All The Boys I've Loved Before

Tumblr has gone crazy about this movie, and while I understand that can make the movie unappealing to some, I say this time I agree with tumblr :/. The movie is really cute, different from other romcoms, and it's not a typical teenage story. The main characters are different and both likeable.

Like 'To All The Boys I Loved Before', this is also an original Netflix romcom. While most other Netflix romcoms are too cheesy and similar to Lifetime movies, these two are quite witty and charming, and the leads have great chemistry. Lucy Liu and Taye Diggs LOOK AMAZING BTW.
I was hoping Netflix would continue with movies like these two, but then they gave us that Sierra movie that was complete and utter garbage, so I'm not holding my breath lol.

Two Weeks Notice
Hugh Grant is such a great comedic actor, I loved him in literally everything he's ever done, and this was no exception. Sandra Bullock is an amazing comedic actress so this duo was great together. If you put anyone else in these roles, the movie would fall flat but these two goofballs made it one of my favorites.

SOLELY BECAUSE IT GAVE US THIS:

I still can't get this BOP out of my head.


Legally Blonde
I mean, how could I not add the president's favorite movie?

Friends With Benefits
Even though everybody here hates Justin Timberlake, I think he was quite good in this comedic role. When this movie came out, there weren't good romcoms around so this was a surprise. It ended up being fun and different, and that other movie with Ashton Kutcher couldn't come close tbh.