With her tours that in total have grossed $1.31 billion, over 300 million albums sold Madonna remains undisputed Queen Of Pop, one of the most famous woman ever to have lived - Madonna turns 60 tomorrow.
OP won't ignore the fact that Madonna these days is much more likely to be attacked than appreciated: for years she's been told to dress more appropriate (for her age, for occasion, because she's a mother etc), for dating younger men, for speaking up her mind, and that one time she fell over the stage.
It is easy to forget how influential she's been over the years. Music, fashion and just whole concept of being a celebrity, she helped to shape today's pop culture landscape.
As she's turning 60, OP would like to go through just a few ways Madonna has changed the world (facts are facts)

Madonna's influence reigns supreme on today's female artists
Way long before Beyonce and Taylor Swift, Madonna really was the first female pop star that created image of an independence, control and drive. Nowadays Madonna often shows her soft side and vulnerability (2016 Billboard speech), but back in the day you wouldn't see that side of Madonna, despite all her personal suffering (she lost her mother when she was only 5) she has rarely let the world see any emotional fragility. Instead, she'd wear costumes that rather looked like an armor, her famous cone bra corset designed by Jean-Paul Gaultier, or wear a man’s suit, in 1985 Playboy and Penthouse published a number of nude photos of Madonna taken in 1978, the publication of the photos caused a media uproar, but Madonna remained unapologetic and defiant. "I’m tough, I’m ambitious and I know exactly what I want," she once said. "If that makes me a bitch, OK."

Revolutionized music videos
Madonna's music videos have depicted controversial subjects such as teen pregnancy, racism, religion, sex, and violence. Along with Michael Jackson, Madonna had used MTV and music videos to establish her popularity and to enhance her recorded work. Since the 80's no other pop star embraced the concept of the music video like Madonna has. Her "Justify My Love", "Erotica" and "What It Feels Like For A Girl" videos were banned from TV due to controversy (first two for being way too sexually explicit and the last one for violence and abuse) Madonna has 69 official music videos.

She brought female sexuality front and center
Madonna is cited as an icon of sexual freedom and expression. Since her first outrages performance at the VMA in '84 she fought the double standards that it was okay for men to exploit their sexuality, but if you're a woman then you should just suppress yours. Madonna easily transmogrified from virgin to dominatrix each time achieving iconic status. She was never afraid to show it to the whole world, she owned her sexuality and marketed it in the way that could benefit her and her career. Madonna became one of the world's first performers to manipulate the juxtaposition of sexual and religious themes. By releasing her coffee book "Sex" in 1992, all mainstream media pretty much slut-shamed her (before that term had even been invented)


Madonna is a pop's fashion provocateur
In 1985 when Like A Virgin went nuclear, a spate of teenage girls began dressing and acting like Madonna, copying her revealing clothes, mesh gloves, sunglasses and streaked, tousled hair. They were the Madonna wannabes. Through their numbers and fervor have diminished through the years along with Madonna's growing movement toward adult themes, wannabes persist to this day.The first known use of this word was in 1981, so it's association with Madonna occurred very shortly after it came to be. In 1990, the word was added to Webster's Dictionary. Through the years Madonna has served many Iconic fashion moments. Who can forget her whole 80's look, or cone bra, or her disco persona or perhaps her dominatrix fashion choices. Noone's saying she invented those looks, but she served them like no other. 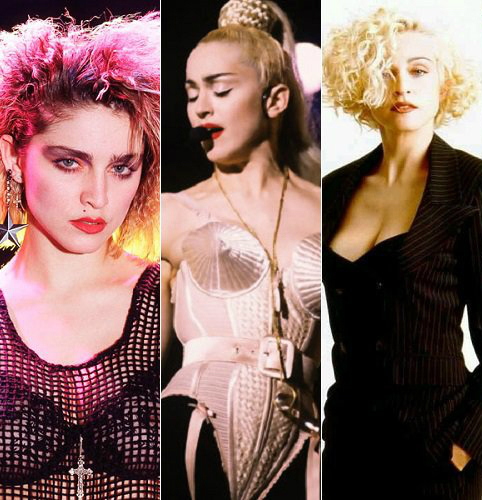 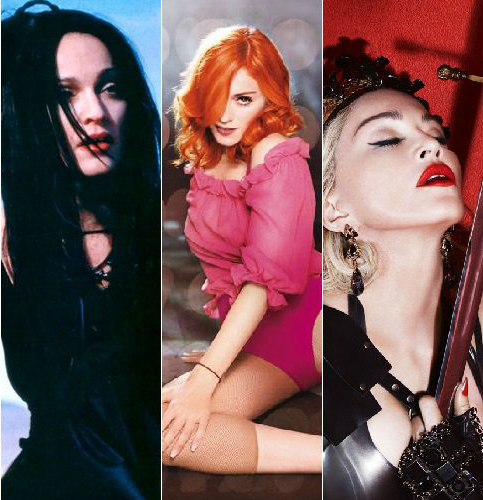 Her documentary was pretty much a precursor to reality TV that we know it now
In a lot of ways Madonna's 1991 tour documentary "Truth Or Dare" can be seen as the precursor to the reality TV that we know it now. Black and white footage showed us what Madonna's like behind the stage, home and on the road. Little did people know most of the scenes were staged for the cameras. It wasn't your regular "fly on the wall" tour documentary that existed before, it was built around a plot that was constructed – a combination of reality and invention. It's also a relic of a time before grueling media training, when pop stars didn't hang on the approval of their publicists before talking. Also it's very quotable.

Madonna's tours set the extravaganza example for many others
Before Madonna, visually most tours were just a dull affair. But in 1990 Madonna changed that. Blond Ambition's Tour unique structure instantly became a blueprint for all other pop concerts tours to follow. There were 1.500 spotlights and four sets that completely covered the stage, all of which were transported from town to town in 18 trucks. Over 100 crew members spent two full days assembling a monstrous stage at each new venue, generating catering bills of $15.000+ per gig. Blond Ambition Tour was a sensation and ambitious dance routines made possible by a specially designed microphone worn like a headset (most people know it as "Madonna mic" now) This tour also solidified Madonna’s status as a cultural tour-de-force and groundbreaking pop artist. Rolling Stone called Blond Ambition the best tour of the ’90s. Since then all Madonna tours were separated into 4-6 different sections, often causing a controversy. She is the highest grossing solo touring artist in history. In 2009 she broke her own record when Sticky & Sweet Tour became the highest grossing tour by a solo artist (previously it was her Confessions Tour from 2006) 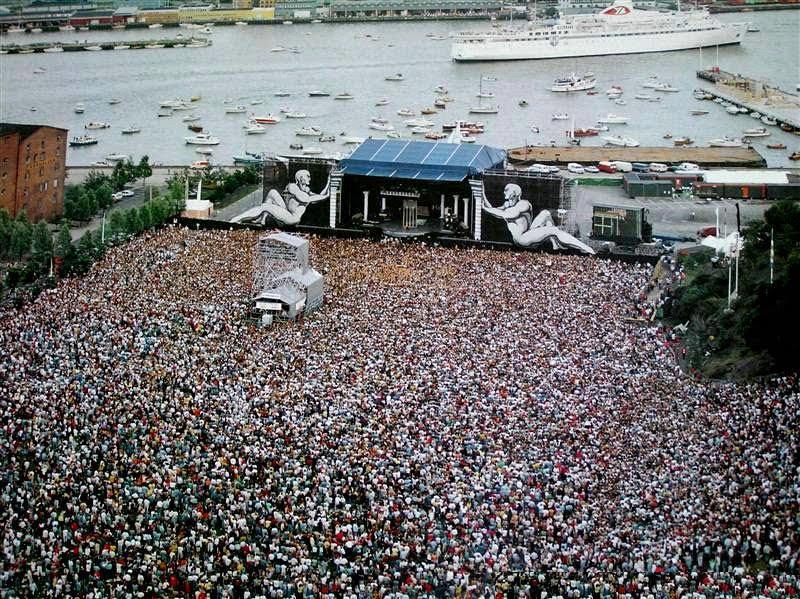 First female pop star who popularized reinvention
David Bowie perhaps was the very first artist who originated the art of pop reinvention, but it was Madonna who took it to a completely different level. Madonna has changed her hair, makeup, style - even her face and body. She didn't wake up like this. Ever. She built her image with her bare hands, out of cone bras and wigs and lipstick. Nowadays you see other pop girls changing their style left and right and there's nothing wrong with that, but Madonna was the first female artist to play with her image so widely.

Madonna is one of the biggest gay Icons out there
The Advocate named Madonna the greatest gay icon of all times for a reason. Madonna stuck her neck out and always stood up for LGBT community before it was cool to do so. Now of course we see pretty much every other pop girl out there speaking about gay rights and how they support gay people, while in reality they don't really care about it and just use it to gain more fans and coins. Madonna from day one of her career surrounded herself with openly gay men, most of her best friends were gay guys (Christopher Flynn - her ballet teacher and mentor, Keith Haring, Martin Burgoyne). Numerous times Madonna insisted that all gay people should be treated equally, and there's nothing wrong with being gay. She never backed down on supporting LGBT people and spoke about it in the 80's when gay people were marginalized. In 2016 Madonna spent Thanksgiving with homeless LGBT kids in Brooklyn. So there's no surprise she's widely celebrated in gay community, rightfully so.

Madonna's humanitarian/philnatrophic work is often overlooked
In the 80's Madonna was fearless when it came to doing the right thing regarding AIDS. During her Blond Ambition tour in New jersey Madonna raised $300.000+ for amfAR, The Foundation for AIDS research, in the name of Keith Haring. She has made several PSAs on the topic and was the most famous person to attend the fund raising AIDS Dance-A-Thones. In 1990 Madonna has received a Commitment to Life Award Award from AIDS Project Los Angeles, then in 1991 was honored with an Award of Courage from amfAR. Her commitment and support to a cause started rumors that Madonna herself was HIV positive. In 2017 Madonna with her Raising Malawi foundation build a a hospital in Malawi named after Madonna's daughter - The Mercy James Institute of Pediatric Surgery and Intensive Care in one year only has done 1,639 surgeries on children, including successful separation of conjoined twins at the liver. In 2006 during her Confessions Tour in Russia Madonna visited orphans living in Children’s Home No.30. she brought over 20 cakes, winter coats and promised to donate a certain amount of funds to charitable foundations Pomogi.Org and Naked Hearts. It is impossible to cover every charitable thing Madonna has done, from visiting terminally ill children in 1985 several times, to contributing funds to three organizations attempting to improve conditions in Detroit in 2014. These things often don't get a lot of attention from press, as it's more entertaining to slam Madonna for something silly like her age and what she wears and how she acts. Which brings us to my very last paragraph.


Madonna is turning 60, how dare she!
Madonna has done many things well worth criticizing, but it is an embarrassing reflection of the culture when some of the harshest criticism she receives is so frequently intertwined with apologetically ageist commentary. She's the #1 touring solo act on the planet, every move she makes still sparks debate in the media and she is years from the age at which workers typically consider retiring, yet a common thread in the public complaints she's received for the past let's say 10-15 years has been the suggestion - that she is too old to be doing, well anything. Maybe people aren't used to seeing older people do the things Madonna is doing and behave in the way Madonna is behaving because society largely removes opportunities from us as we age, but all of Madonna's banked power from her youth is allowing her to override that barrier. And as for those who criticize Madonna's age not in relation to her work but just because she is, no shit, older than Nefertiti, Madonna guaranteed the last laugh, if they're lucky, they'll get to be her age one day too, at which time they will have some serious self-loathing to sort out.