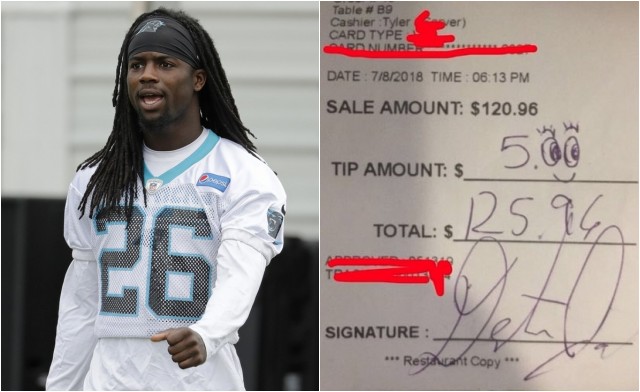 NFL rookie Donte Jackson of LSU called out on Twitter for tipping $5 on a $120 restaurant bill https://t.co/cPd0ANUKE2 pic.twitter.com/O86j1z8dmq

Fomer LSU cornerback Donte Jackson — who was signed to the NFL's Carolina Panthers for a 4-year, $4.8 million deal — was called out via Twitter by a waiter who served him at a New Orleans restaurant after Jackson tipped him $5 on a $120 bill. The waiter tweeted, “You can't even tip 10%. I just wanna know if my service was bad honestly. You childish for the smiley faces too.” In a now deleted Tweet, the NFL rookie responded to the waiter saying: “You got 5 more dollars then you had be grateful.”


@_DJack01 You can’t even tip 10%. I just wanna know if my service was bad honestly. You childish for the smiley faces too🤣 pic.twitter.com/19Wos16hZc

Not related to this incident, the NFL rookie had this to say over Twitter just last month:

“Keep the change” is something I rarely say. 🤷🏾‍♂️