Former *NSYNC member Lance Bass is on board as an executive producer for Youtube Red's upcoming documentary on Lou Pearlman.

The movie will cover Pearlman's remarkable success, to his prison death at 62 in 2016 while serving a 25-year sentence for money laundering, conspiracy and other felony charges tied to one of the longest-running Ponzi schemes in U.S. history. No news on whether they'll cover any of the sexual assault rumours, but I doubt they will.

2. Lance Bass and Husband are Going to Become Actual Daddies

Lance Bass revealed to ET that him and his husband, Michael Turchin, started the surrogacy process last week.

He said, "we've met with surrogates, we’re looking at eggs, we now have the person representing us, and contracts are being made, and it’s such a process that we had no idea existed. But it’s also fascinating too. It’s already amazing.” 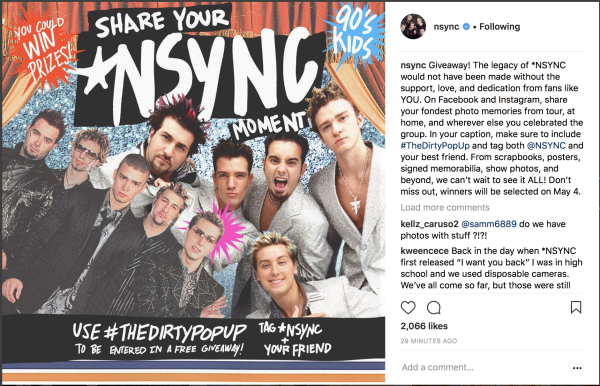 All your years of collecting *NSYNC memorabilia have finally paid off! Snap and upload them to Instagram or Facebook, include #TheDirtyPopUp in your post, and tag @NSYNC and a friend to stand a chance of winning. No idea what the prizes are though, probably just merchandise? (Can you imagine if they had a meet and greet tho. Cry)

4. In Defense of JC Chasez, *NSYNC's Underappreciated Boy Band Frontman (also known as, The Superior *NSYNC Member and Rightful Breakout Star of the Group Finally Getting the Recognition He Deserves... 15 Years Too Late 💔)

Another news source jumping in with a JC Chasez thinkpiece! Pretty much covers the same ground as the previous article here but I'm not complaining.

"Celebrity was designed for Timberlake to shine, as he was on the brink of solo stardom -- but JC still one-upped him by utilizing urban-inspired beats that felt more authentic. His bandmate teamed up with big names like Wade Robson and The Neptunes for hit singles “Pop,” “Girlfriend” and “Gone,” while JC opted for pushing the envelope with blippy PlayStation sound effects on deeper cuts like “The Game Is Over,” laced his affectionate vocals on the sticky-sweet “Two Of Us,” got adventurous on the funkified “Up Against the Wall,” inspired by two-step U.K. garage, and channeled his inner Brian McKnight with his emotional belts on “Selfish” (the R&B great produced the ballad)."