UNWELCOMED GUESTS — Just as the town’s mayoral race gets underway, Riverdale High’s own student council election heats up since it's a battle of the ships.

Archie steps up to help after learning that Hiram’s mobster associates have come to Riverdale to stir up some trouble.

Meanwhile, things take a dangerous turn for Alice, Betty, and Chic when shit hits the fan cause that car belonging to the drug dealer Chic killed gets dragged up from the lake so trouble arrives at the Cooper's house.

Finally, Toni, Veronica and Josie team up to hopefully rescue Cheryl from the evil nuns who are trying to force her through conversion therapy because Penelope is a fucking monster

Directed by Alexis Ostrander and written by Britta Lundin & Brian E. Paterson. There will be a two-week hiatus (yes, again) after this episode

Thanks to fans who waited all day to watch filming of the finale, a lot of shit is about to hit the Serpents.

I left around 8. He wasn't there then. Kevin (Casey Cott) was leading the pack. 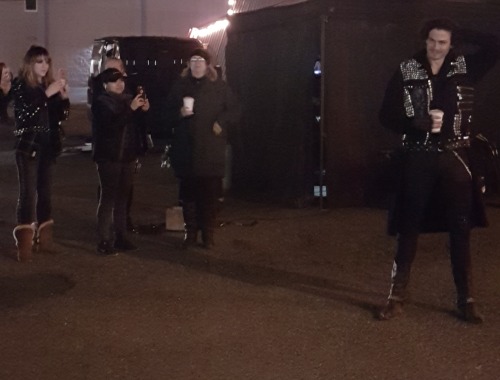 Or that apparently all the Serpents seem like they're fleeing town probably because Hiram evicted them from the trailer park which he owns. Don't mind those last two names on the caption. But also notice Cheryl and Toni running hand in hand!

Also, from his own IG Story, Casey has wrapped filming!

Filming for season 2 will wrap this Saturday