asnindie
March 20th, 2018, 05:30 pm
I recently finished Black Lagoon and it's soooo good. I love all the characters. And I just adore how the best characters are female and they're smart and fantastic characters with their own stories and so much depth to them.

also, pretty sure my friend has my tokyo babylon manga and just never gave it back, lol.

lol I lost my Clover manga the same way.
(no subject) - (Anonymous)

Re: My favorite "adult" aime

ladyserenity84
March 20th, 2018, 02:47 am
I made the mistake of wanting to read the manga based on the anime, and...that didn't go over so well for expectation. But I liked the anime. It's been a while since I've seen it.

aeromi
March 20th, 2018, 12:28 am
I havent watched any new anime lately im only keeping up with the monogatari series and rewatching old classics, none of the new anime seems interesting tbh

meow_tan
March 20th, 2018, 12:34 am
i stopped keeping up with anime once newtype magazine went out of business. after that nothing has caught my eye minus attack on titan which everyone watched so i dont count it

megalixer
March 20th, 2018, 01:56 am
Maybe it's just that I don't keep up with anime anymore so the stuff I do hear about is the stuff that gets popular on reddit, but it feels like a way higher percentage of anime that gets made these days is just cliché moe-filled basement dweller-bait :/ I feel like there was a lot more diversity of target audiences in the stuff from even ~10-15 years ago.

baxtersaurus
March 20th, 2018, 12:28 am
I've had this in every wallet I've ever owned since before I even needed a wallet, fight me 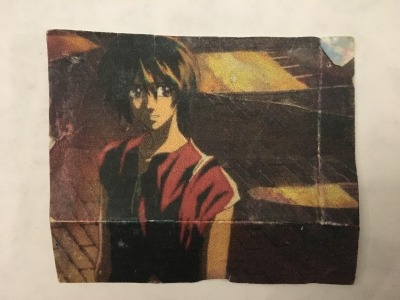 choukoumei
March 20th, 2018, 12:29 am
Yesss Escaflowne was the best and I am sad so many people have forgotten it.

I'm still mad about the ending.

choukoumei
March 20th, 2018, 12:29 am
The Parasyte anime was not bad but not as creepy as I remember the manga being.

Right now I am really into Mahoutsukai no Yome and I like when they have creepy episodes. Great mythology in that series and beautiful art. I even drew fanart: http://annmarcellino.tumblr.com/post/171670699633

myharu
March 20th, 2018, 12:31 am
My favorite will always be Dragon Ball. Super is going on indefinite hiatus by the end of this month and I’m looking for a bunch of series to fill that void. Bnha is only one series and One Punch Man isn’t coming out until way later it seems 😱

unchoco
March 20th, 2018, 12:32 am
I just got back from Tokyo so I'm back into my anime phase. I just finished Utena for the first time and I'm blown away. It still holds up very well.

Right now the only series I'm following is CCS Clear Card Arc. I also started One Piece from the beginning and I'm on chapter 350. I'm OBSESSED. It's such a classic. I can't believe I stopped reading it a decade ago. I'll go 100% anime mode again when Nana is active again. I'm so desperate I'm willing to clear out my 401k to Yazawa-san to finish it or at least let us know how it ends.

puppetmon
March 20th, 2018, 12:45 am
i love one piece so much. right now i'm re-watching the series which is a huge task(it's been months and i'm not even halfway through lol) but it's also reminding me how much i love the series and how good some of the earlier arcs are.

unchoco
March 20th, 2018, 03:12 am
I hope it doesn't go to shit too soon because there hasn't been a single arc that I've hated yet. Sky Island maybe because I hate any type of "God" storyline. I'm in love with the Water Seven Arc I'm on now.
(no subject) -

somnus_angel
March 20th, 2018, 12:51 am
Even though the animation is hella repetitive, I loved Utena. I'm surprised how much I still think about it after I finished the series.
(no subject) -

noskidaddle
March 20th, 2018, 01:20 am
yesssssssssss, one piece! (except i've been watching the anime instead)

seriously azumanga still has episodes that have me laughing so hard it hurts and im crying.

dearmisterecho
March 22nd, 2018, 01:09 pm
Azumanga Daioh was my shit in my early anime loving days. I’ve been meaning to rewatch the series.

moronicus_kyla
March 20th, 2018, 12:34 am
I was ok with all the violence and gore in Devilman Crybaby until episode five, at which point I stopped watching and just read spoilers (ending was just what I expected, so no great loss). Welp, sorry for being a wuss, but I couldn't see myself continuing to root for the main character after that.

My favorite anime are Fullmetal Alchemist (Brotherhood >>>> but I like them both), Rurouni Kenshin (the Kyoto and Shimabara arcs, and prequel movie especially), Jigoku Shojo (the first two seasons, I haven't seen the others) and Samurai Champloo. For shoujo, I really liked Princess Tutu, Ore Monogatari, and Ouran High School Host Club.

sursumcorda
March 20th, 2018, 12:42 am
i was half asleep watching the first devilman crybaby episode and then all the body horror at the club horrified me and i had to stop lol

I love the comedic surreal anime like Panty and Stocking and Pop Team Epic.

meow_tan
March 20th, 2018, 12:39 am
pop team epic is the first anime ive seen in years and its amazing. whats your favorite sketch been so far?

backwardsjoker
March 20th, 2018, 05:26 am
There was a YT comment I saw that said “Pop Team Epic is the shit you’d sneak to watch on Adult Swim on a school night.” And after watching a couple I agree lol

I like a whole bunch of stuff but find it really hard to get into newer things if they dont grab me right away. I want to stick with Darling in the FRANXX this season but the pace is just...meh?

meow_tan
March 20th, 2018, 12:42 am
theres some gore and brief nudity? i remember a topless scene at one point + every scene with faye. i think its bc the series is relatively realistic that it is considered r-rated. if the animation was more stylized or the series more based in fantasy i dont think people would see it as adult.