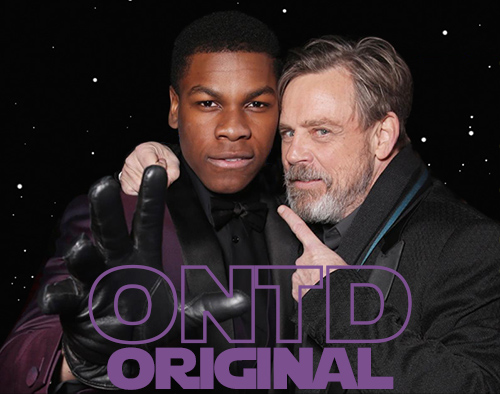 In our very own galaxy, we are blessed enough to witness the precious relationship that exists between Star Wars co-stars Mark Hamill and John Boyega via their twitters. Here are 7 fun interactions between the two. Thank the Force that they were brought together <3


John is late for The Last Jedi premier, Mark gives him some sound advice:

Trying to get back for the LA premiere! I actually NEED a pilot !!!

Only fly with Harrison on green-screen, son. #FatherlyAdvice


Mark scolds John and Kelly Marie for goofing off, respect your elders John!:

SEE WHAT I HAVE TO PUT UP WITH?! @lovegwendoline was making a perfectly valid point about masked characters-only to be derailed by @JohnBoyega & Kelly Marie who were barely paying attention & sadly scored very poorly on the pop-quiz afterwards😩#QuizKidsFail https://t.co/XPyM7lNNec


After a day of TLJ promo:

Stomach already in pain after a few interviews with @HamillHimself

Reunited with peanut and my rose ☺️

Not a bad day!

I'm assuming your stomach pain is from laughing at my "dad jokes"- If anyone could appreciate them it would be you, son. (Btw, I felt the same way, but I think it was the sushi I ordered at the bus station) PS: You're finntastic in #TheLastJedi 💚-mh https://t.co/phhs1CkjN7


Mark has questions about the trailer for John's movie, Pacific Rim Uprising:

Get ready to have a lot of fun with this one! @PacificRim is out March 23rd! Here’s what’s in store! #PacificRimUprising pic.twitter.com/fCJHDucDoE

😒😒😒 you know you’re not watching part 1 dad but don’t worry we definitely connect the stories and I’ll call you to explain jaeger language. ❤️


Mark, John, and Rian Johnson have a laugh at the snowflake version of TLJ with all the women edited out:


Mark and John come on opposite sides of the Porg debate:

.@JohnBoyega I find you lack of #PorgAdoration disturbing, son. I raised you better than that! You usually are so enlightened & porgressive.
They are not aggressive or a threat! (L)
They are a positive inspiration! (R)#PorgsArePrecious #DontBeAPorgPessimist pic.twitter.com/EDpFVBlV5u


Mark gives John a shout out and is left hanging:

Shout-out to @JohnBoyega for no reason other than being wickedly-proficient w/ a lightsaber w/ no training whatsoever. You do me proud, son! pic.twitter.com/xeCFbzA9ph

Late response because I'm in Beijing but thanks dad @HamillHimself

What are your favorite celebrity friendships?