Celebs react to companies cutting ties with the NRA 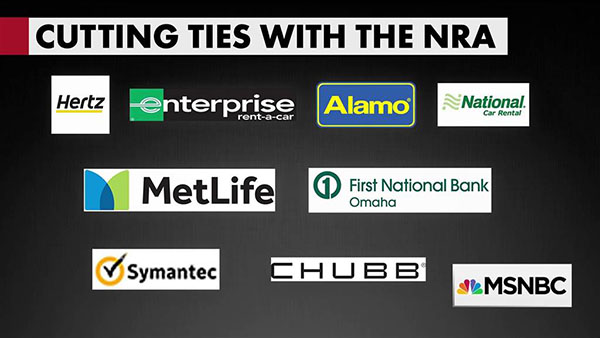 U.S. companies that have partnered with the National Rifle Association to offer discounts and benefits to its members have begun to distance themselves from the gun lobbying group after the latest school shooting. Alyssa Milano, Misha Collins, Billy Eichner, Mia Farrow, George Takei voiced support. Others, like James Woods, encouraged fellow NRA members to take their business elsewhere.

Thank you, @united. Look, young people of America. Look what you are doing. Your voices matter. You are a force. https://t.co/U3TjjEVAst

Hey @fedex @amazon @google - WHICH SIDE ARE YOU ON??? #BoycottNRA https://t.co/xPSO1UGKIs

If a politician takes money from the @NRA we will #VoteThemOut #boycottNRA Change is here! Join the #NeverAgainmovement #MarchForOurLives on March 24 in DC pic.twitter.com/tlK5AkthsJ

And thank YOU for disrespecting all your law-abiding now former clients, who work arduously to promote firearm safety. I used to use @Enterprise. I now welcome all fellow @NRA members to rethink their car rental arrangements. https://t.co/hgyyt2RFog

In just 48 hours, these companies cut ties with the NRA:

“The law-abiding members of the NRA had nothing at all to do with the failure of that school’s security preparedness, the failure of America’s mental health system, the failure of the National Instant Check System or the cruel failures of both federal and local law enforcement,” the NRA said.

“Despite that, some corporations have decided to punish NRA membership in a shameful display of political and civic cowardice.”