Text: A few days ago ex teen wolf and habitual thirst trapper Tyler "T Pose" Posey went on instagram (clad in only his black boxer briefs) to declare his opinion on recent goings on in the popular media~

For those too lazy/can't click play, this is what he rambles says:
"Yo guys it's me, Tyler Posey. I was on a show called Teen Wolf MTV and I have followers on social media and I'm in the limelight...If me or a fellow one of my celebrity friends or whoever is out there in the limelight do something wrong, morally and humanly, don't respect us for it. It's nice to stand by somebody's side that you admire and look up to but, you can't stand by our side through everything. If we fuck up we fuck up, and we should be treated that way. That's all I have to say. We're no better than you. We're humans, we're all humans, and if we mess up, don't praise us for it."

In the comments he states that this isn't directed at anyone in particular (there are over 8k comments guys, I couldn't find it again)
Here is one of his many responses to people still defending that creature: 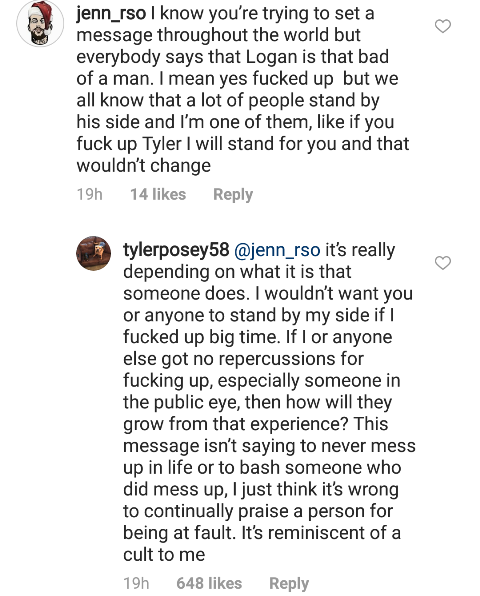 ONTD do you like to record yourself in your underwear in mirrored rooms while taking firm stances on social issues?