Armie Hammer: "It's an artist thing, Polanski is a grey area." 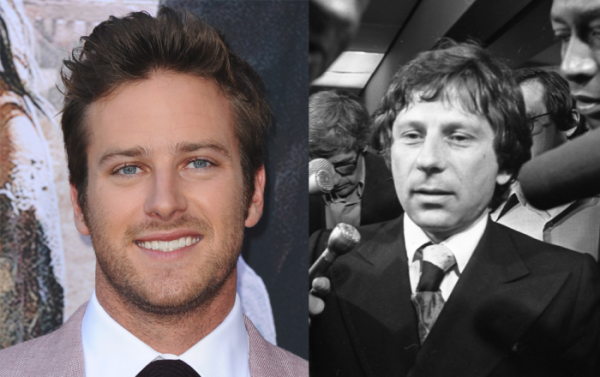 Professional thin lip Armie Hammer drops by to film an episode of Podcast "Happy Sad Confused", making sure to wax poetic at length over the lack of integrity in super hero films ("This is probably something I shouldn't talk about...") before dropping some loud and proud support for convicted child rapist Roman Polanski along the way.

Armie Hammer has decided 2017 is the year for you to find out how he really feels about rape, sexual assault, and moral grey areas.  He also wants to falsely lead you to believe that Nate Parker's past was a big, sad un-googleable secret despite it being posted prominately in the middle of his wikipedia page.

You can hear what he had to say at the source around 43 minutes in, or if ONTD has progressed from never reading to also never listening, you can read the transcript below.

Host: So where are you in terms "separating the art from the artist"?
Hammer: We didn't, like, I mean... no one really knew. That was...
Host: Yeah, the next stuff came out after, no one really knew that past too well.
Hammer: I don't know, man, like... For me... (audible sigh)
Host: So like, if Polanski wants to work with you... what do you say?
Hammer: You know, it's funny man. Because part of me as an artist would say... there's not a lot of artists in history who don't have /something/ fucked up about them.
Host: Right...
Hammer: You don't find reasonable men at the top of large mountains, and sane people don't decide to become artists, because it's a weird job, with no job security and you know, whatever. But, it's... the idealist in me would like to think, like, okay, I'm not working with "Polanski" the person, I'm working with him as an artist and this is a new thing that he's doing and I think that he is a talented artist or whatever. But at the end of the day, like... as a human, and as someone who's trying to live a virtuous life, you kind of go "Is it worth it?" because you know there's going to be drama. You know it's going to be something that can overshadow what you're actually trying to do. So, I don't know, it's a grey area. It's full of grey, you know?
Host: I grew up, Woody Allen was my spirit animal, you know? Mel Gibson, I grew up with his films. I don't know if I can throw all of that out.
Hammer: Yeah, it's like... yeah. Yeah.