Ten years ago, 2008 happened, and, at least in America, it was the beginning of a shining time of optimism and progress.

And while 2018 looks to finds us on nearly the opposite end of those feelings, there are still the movies that came out nearly ten years ago that we hold near and dear to us.

Or, that made a boatload of money.

Note: These are only the movies I've seen, and that's excluding the more boring ones.
Iron Man
An industrialist weapons maker gets held hostage, escapes, becomes a superhero, and strives to be a better person. What more can you ask for to start your empire but a redemption story? While Raimi's Spiderman films were well-received and the Fantastic Four would only get worse, this truly kicked the superhero craze into so high a gear, we're still not finished with at least four of them a year.

"I am Iron Man."
The one that started a long list of safe, enjoyable, and above all, profitable superhero films. To this day, it leaves people scrambling to think up their own Cinematic Universes to varying degrees of success. RIP Dark Universe. And this was before Disney bought Marvel Entertainment for 4$Billion dollars.

Arguably there are sixteen sequels; But for the ones involving the Man himself, there's Iron Man 2 and 3, Avengers 1, 2, and the upcoming Infinity War, and Captain America: Civil War. Just ... roll with it.
Twilight
You couldn't escape it; Twilight, based upon Stephenie Meyer's runaway bestseller and precursor to another favorite, Fifty Shades of Grey, was a film at last, after years (and a vastly different version) written at Paramount before moving onto Summit Entertainment and being adapted into the more faithful adaptation that we all know and...know.

A girl falls in love with a KILLER vampire and then bad ones are after her.

I've never read these books.
But! I have seen every movie for some reason; Besides the fault in our source material, the production value at least is impressive. And look, Anna Kendrick!

It has the prestigious honor of being the most purchased DVD of the year, as well as four (!) sequels. Was it the beginning of the oh-so popular 'split the last book into two parts' trend?
Speed Racer
Based upon the 1960's Japanese anime and manga by the same name, the Wachowski siblings brought us a high-octane, over the top garishly cartoonish film.

It's so bright, vibrant, and almost seizure-inducing that I just had to show you a clip.
What can I say? It bombed, right there between the iffy Cloud Atlas and the underrated Jupiter Ascending. Are you surprised?

Of course, like many movies kicked in the face by ways of critical response, It  has its fans out there. There's a rumored sequel script floating around - but don't expect to see it.
The Dark Knight
Widely regarded as the greatest superhero movie of all time, the #1 highest grossing movie of 2008, more critics named this movie among their top ten lists than any other in the year.

"We kill the Batman."
It won the Academy Award for Best Sound Mixing and a posthumous Best Supporting Actor for Heath Ledger, though it missed out on a Best Picture nom, opening "discussions" among moviegoers about how limiting the Academy is. It's a sequel to 2005's Batman Begins, and the precursor to 2012's The Dark Knight Rises.

The current DCEU is this trilogy's spiritual successor, but hey, why ruin your day comparing the two?
Kung Fu Panda
Dreamworks finally got on the 'make movies people enjoy watching outside of Shrek' train and graced us with (IMHO) the greatest animated movie ever put to film. As the 3rd highest grossing movie worldwide of the year (It was the first animated film in China to make more than 100$m Yuan).

"The panda?" "Yes the panda!"
"Maybe Dreamworks is better for more than just a smart ass parody," Audiences said, as they watched a movie whose moral boils down to "You have value and worth just the way you are, and there's still nothing wrong with working toward personal improvement."

It's the first Dreamworks movie to really get the franchise treatment turned up to 100 - a show, short films, a (postponed) play, a 'multi sensory attraction', there's even another show in the works.

There are two more movies in the franchise and a fourth one planned for somewhere in the vague future. 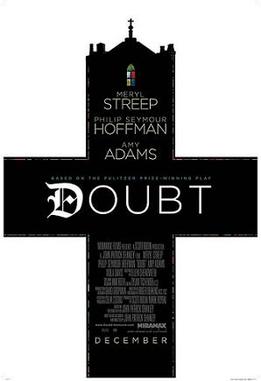 "I have such doubts."
Poster from IMDB
Based upon the play "Doubt: A Parable" and starring the group of legends Meryl Streep, Viola Davis, Amy Adams, and Philip Seymour Hoffman, Doubt is about a Sister not being entirely sure if the Father's attentions toward the only black boy in this Catholic school is innocent or not.

The movie was extremely decorated; All four main cast members were nominated for Best Acting in their respective categories; Especially astonishing was Davis' nomination for a mere seven-minute scene.
The movie also received a nomination for Best Screenplay, though no wins. There's not a sequel or a firm resolution. The point would be defeated either way, don't you think?
Cloverfield
A found footage monster movie whose production was clouded in secrecy and produced by our old lense-flare friend, J.J Abrams. It boils down to friend simply trying to escape monsters and parasites attacking New York City.

Some audiences also tried to avoid the shaky cam, which made a few people sick.

Thank God DBOX wasn't a thing back then.
It was received positively, and many were anxious for a sequel...instead, it would be the beginning of the Cloverfield franchise. It returned in 2016 with 10 Cloverfield Lane, and will bless us with the horror! on a spaceship-esque God Particle sometime in 2018.
Rocknrolla

"That's not how you punch someone."
By far the least financially successful movie on this list - yes, even worse than Speed Racer, as it only made around 25$m worldwide on an unknown but probably shoestring budget.

Starring many very talented and attractive people who are now way, way more famous than they were in 2008, it is definitely worth at least one watch. I won't spoil the plot, but if real-estate scams, paintings, awkward editing, gangsters, and rockstars faking their own death sound like your thing, why, it will be perfect for you!

There's no sequel 🙃  Not yet, anyway. Seeing as this is Guy Ritchie's cult classic magnum opus (and no I do not mean The Man From Uncle), I'm sure we'll get one .... before we die.


Now, I could have included In Bruges, Wall-E, High School Musical 3, or Slumdog Millionaire. But I'd rather hear what you remember instead.