- They share details of how they met, how they went on vacation to Botswana alone together after two dates, how he proposed
- Harry gets very excited at being called "husband"
- The corgis love her

Here they talk about the ring and his mother:

Prince Harry thinks Princess Diana and Meghan Markle would have been "thick as thieves, without question. I think she would be over the moon jumping up and down." https://t.co/LPqxdJfmcB pic.twitter.com/qV9md5OzgN

longlonglong12
November 27th, 2017, 07:14 pm
Yeah I couldn't even watch Will & Kate's, I was getting secondhand embarrassment for how shy and uncomfortable she was. Meghan is sooo much more at ease, much more comfortable to watch

sestiere
November 27th, 2017, 07:17 pm
lmao i remember watching it and when the reporter brought up the fact william broke up with her beforehand i was like "g2g can't watch anymore"

mrscantelope
November 27th, 2017, 07:29 pm
Well she's an actress and has a lot more experience being in front of the camera and doing promo.

babarsuhail
November 27th, 2017, 07:35 pm
well, meghan is an actress and comfortable infront of the camera and giving interviews in general.

patoplastico
November 27th, 2017, 07:39 pm
I don't know if anyone told ya, but she's an actress, thus used to the cameras, and is also more mature than Kate was then.

misscrystal
November 27th, 2017, 07:42 pm
In fairness, Meghan is an actress. It's literally her job to be comfortable on camera.

modern_toilet
November 27th, 2017, 08:02 pm
well i mean ... she's a fucking actor, it's legit her job to be able to act X way in X situation and to speak in front of people without being a shy, blithering mess.

longlonglong12
November 27th, 2017, 08:53 pm
JFC these replies. we all know she's an actress. That doesn't invalidate the useful attributes that she possesses. In fact, it's almost as if your life experiences can sometimes better prepare you for certain situations down the road 🙄
(no subject) -

accioanime
November 27th, 2017, 09:31 pm
I also wanna add on top of the actress comments that she is 8 years older than Kate when Kate did her interview. Meghan just comes off more mature, especially since she has had time to live on her own, build her own career (kinda) and even married before. Kate's life revolved around William since she was 20 and she was never financially independent from her parents, and I do not count that fashion job she got through her mom's friends or working as a photographer for her family's online party business.
(no subject) -

silentxstrom
November 27th, 2017, 09:55 pm
Megan is probably so used to interviews given her acting career that it’s probably no big deal. Kate seemed very introverted and a little shy.

She wasn't groomed from her teenage years to hunt and marry a Prince, so she doesn't have the weight of her mother's expectations on her shoulders.

an actress, she is

is she an actress? yes
(no subject) -

ilovespooons
November 28th, 2017, 01:49 am
She's comfortable in front of the camera, which I've heard might be because she's an actress.

mingemonster
November 28th, 2017, 06:28 am
Considering she's a pharmacist, I'm sure she's used to talking to strangers.

klutzy_girl
November 27th, 2017, 07:10 pm
They were so cute and giggly through the whole interview. I can't wait for the wedding!

joaniemaloney
November 27th, 2017, 07:11 pm
this was really sweet. I realize that I hadn't really heard either of them speak before today - or enough to know their voices - so that was a bit of a surprise. the ring's a very nice touch. and they both really happy.

speedychi
November 27th, 2017, 08:53 pm
same, id never heard her speak and had only heard him maybe once before

accioanime
November 27th, 2017, 09:22 pm
I have never watched anything Meghan has been on so I was surprised. She is very articulate and sticks to the narrative of not knowing much about Prince Harry (surejan.gif) and focusing on normalizing their relationship as much as possible, like they are just your typical LDR couple in love. You can tell she knows how to turn the questions around and make it about them even though the interviewer keeps pushing to talk about the queen, will and kate, etc.

healthypanda
November 28th, 2017, 02:08 am
I really like Meghan but that was the only part that made me roll my eyes. How could you grow up in America and not hear about Princess Diana and the Royal family? They were all over the tabloids in the 90s, lol.
(no subject) -

caitiecait
November 27th, 2017, 09:30 pm
My girlfriend just gave me the weirdest look, but SJP's face is actually making me cackle. 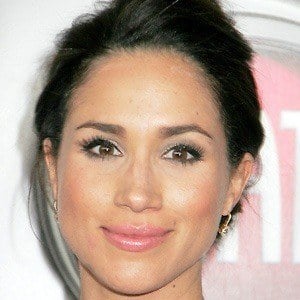 YAS SIS SO MUCH MELANIN!

michiru
November 27th, 2017, 07:23 pm
also, lol at these photos with the blinding flash. watch the interview; she's much darker with more realistic lighting.

just444
November 27th, 2017, 07:16 pm
how can anyone still deny that Charles is really Harry's dad when Harry is looking more and more like Philip the older he gets

I guess because he looks so much like his biological father.

HHHStephFan
November 27th, 2017, 07:42 pm
Other than red hair, he looks nothing like him. They don't share a single facial feature.

qween_tartii
November 27th, 2017, 08:26 pm
except he looks exactly like his grandfather HHHStephFan
November 27th, 2017, 07:41 pm
Harry looks just like Charles and Phillip now. I guess people think he's not related because of his red hair but red hair runs in Diana's family. Her brother has red hair.

masterofmystery
November 27th, 2017, 08:38 pm
he has charles' exact voice, the questioning is so ridiculous
(no subject) -

faedreamer
November 27th, 2017, 09:08 pm
lol he was so adorably bitter about them still barking at him but flopping at her feet

sethelaezekiel
November 27th, 2017, 07:16 pm
I'm going to need black women to stop celebrating this engagement as if it's a great accomplishment for us it's really embarrassing

the black twitter jokes are funny tho, i died at “knuck if you buckingham palace”
(no subject) -

frankthesheep
November 27th, 2017, 07:32 pm
I think they have nice chemistry and appear to go well together. But people online are doing too much, even commenters i like on twitter are giving me so much second hand embarrassment. But Harry has always brought out that side in black women for some strange reason.
(no subject) -

helders
November 27th, 2017, 07:39 pm
idk i feel of two ways about it. like...it's embarrassing but i'm trying to understand and not be mean. i just don't want any dissertations and thinkpieces.

pixiesilver
November 27th, 2017, 08:03 pm
thats why am trying to stay away cause its really sad seeing balck women acting like this right here is best accomplishment a balck woman can get. Now say if prince was black would they still be creaming themselves ?
(no subject) -

spiral_mystik
November 27th, 2017, 08:22 pm
This is making me so uncomfortable.
Look, as a black woman, I'm all for the black woman solidarity, I really am. But I don't think that a beautiful biracial woman getting married to a rich white guy with a racist family is a historic victory for us. Calm down!
(no subject) -

thebloomroom
November 27th, 2017, 08:25 pm
I get it but I'm also like why are we celebrating that she's marrying a dude who dressed as a Nazi and comes from lines of inbred colonizers? Fuck this, she's too good for them!!! But also cackling at the white ppl upset about it. I'm torn.
(no subject) -

saintclaire87
November 27th, 2017, 09:09 pm
Same. It’s making me uncomfortable, the idea of getting married as some sort of accomplishment. And the royal family/Harry is a mess, I don’t see how married into a racist/imperial white family is some sort of win.

lysblack
November 27th, 2017, 07:17 pm
I won't lie, the 13 old me is devastated, as she truly believed she was going to marry him (even though she never worked out how or why they would meet).

With that said, the interview was super cute.

hoot
November 27th, 2017, 07:59 pm
lol I did a study abroad thing in London when I was 15 and this girl I went with had to stop at Buckingham Palace every time we got near it, because she was hoping if she stood around looking cute Harry would like notice her outside and invite her in lol.

I played along because I didn't want to destroy her dreams.

lovedforaday
November 27th, 2017, 07:19 pm
i wonder if there's some comfort he found someone who is a confident public and media speaker.

theharleyquinn
November 27th, 2017, 07:23 pm
seriously, he must be so grateful. she owned this interview

ch33rylips
November 27th, 2017, 07:33 pm
She's gonna body, kate at the whole princess thing and it's gonna be so much fun watching the media try and act like she isn't.

blacktinbox Expand
tl;dr i love this shit, let me have this. -

sowhat_whocares Expand
Re: tl;dr i love this shit, let me have this. -

snortingcoke Expand
Re: tl;dr i love this shit, let me have this. -